There has always been much reluctance among surgeons to perform myomectomy during cesarean section (CS) because of the theoretical risk of massive hemorrhage and postoperative morbidity. However, in recent times, better patient selection, better hemostatic measures and postoperative care have led to more surgeons attempting myomectomy at CS. Here we report a case of a large lower segment fibroid obstructing the delivery of the fetus, necessitating myomectomy at CS.

Leiomyomata (fibroids) are benign smooth muscle cell tumors of the uterus and female pelvis. The incidence of fibroids during pregnancy is estimated to be 0.1 to 12.5%.[1] Most often they do not pose any problem during pregnancy; however, around 10 to 30% of pregnant women are symptomatic and have pain and pressure symptoms due to complications like torsion or red degeneration. There could also be intrapartum complications like obstructed labor, postpartum hemorrhage and subinvolution of the uterus. [1] With increase in maternal age at pregnancy, the incidence of fibroids encountered during cesarean section is also on the rise and poses a management challenge to the surgeon.

A 36-year-old primigravida conceived after infertility treatment, was referred to our tertiary care center at 33 weeks of gestation in view of ultrasonography (USG) showing severe oligohydramnios with intrauterine growth restriction (IUGR) and large lower uterine segment intramural fibroid of 8 x 10 cm. Patient had undergone a cervical cerclage at 20 weeks of gestation in view of short cervical length.
All routine antenatal investigations were normal. On examination, her pulse was 86 beats per minute; her BP was 120/80 mm Hg. On abdominal examination, uterus was smaller than expected for her gestation age and was only 28 weeks’ size; fetus was in cephalic presentation, with normal fetal heart sounds. The fibroid was palpable anteriorly on the left side, approximately 8 cm in size; it was non-tender. On per vaginal examination, cervical os was closed and uneffaced, knot of encerclage was in place, and pelvis was adequate for the fetus.
USG performed at our center showed severe oligohydramnios (amniotic fluid index of 0-1) with IUGR and absent diastolic flow on obstetric Doppler. There was an intramural fibroid of 8 x 10 cm in the anterolateral wall on the left side.
In view of these findings and history of infertility with large lower segment fibroid, she was scheduled for an elective lower segment CS. Cesarean myomectomy was anticipated hence patient and her relatives were counseled about the same and consent was taken. Adequate blood was cross matched and kept ready.
Patient was operated under regional anesthesia; abdomen was opened through a vertical midline incision till the uterus was reached. In situ, there was evidence of a intramural fibroid of approximately 8 -10 cm diameter at the junction of the upper and lower uterine segment with the uterovesical fold of peritoneum running midway over the fibroid. The uterovesical fold was dissected and the bladder was mobilized inferiorly. The lower edge of the fibroid was palpated, and a transverse incision was made below the lower margin of the fibroid in the lower segment. Amniotomy was done; however, the fetal head which was small could not be delivered due to obstruction by the fibroid. Hence, the decision for cesarean myomectomy was taken. Going through the upper margin of the uterine incision, the fibroid was rapidly dissected and enucleated by sharp and blunt dissection in the usual manner, as seen in Figures 1 and 2. 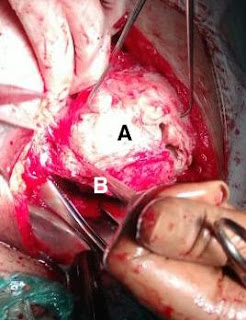 Figure 1. Fibroid being enucleated. A – The fibroid, B – Upper edge of uterine incision. 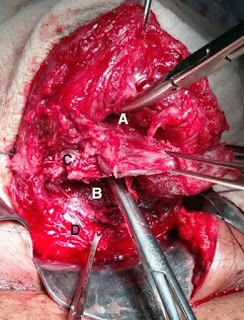 Once the myomectomy was performed, a live male child of 1.14 kg was easily delivered. The newborn had an Apgar score of 9 and required neonatal intensive care unit admission. Base of the myoma was sutured in three layers, as seen in Figure 3, followed by suturing of uterine incision and closure of abdomen as usual in layers. The patient tolerated the procedure well and postoperative course was uneventful. There was no postpartum hemorrhage or infective complications. Blood transfusion was not required. She was discharged from our center on postoperative day 5. On further follow up at day 15, there was no evidence of subinvolution or secondary postpartum hemorrhage. 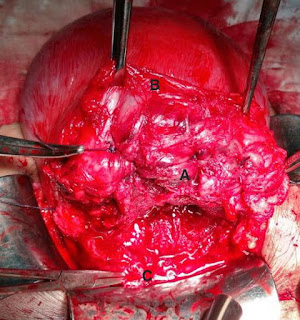 Thus, cesarean myomectomy in selected cases and in experienced hands may be considered safe and effective. By avoiding a future surgery and additional costs on healthcare system, it may be especially relevant in low resource settings like India. However, it should be noted that most studies published in literature are retrospective in nature and results from more extensive, randomized controlled trials are awaited before cesarean myomectomy is routinely recommended.