Fibromyomas or more commonly known as fibroids are benign neoplasms of the uterus commonly found in practice in about 5 - 20 % of women in the reproductive age group. These are slow growing tumors and may vary in size and number from minuscule and multiple to huge and single. A 37 year old patient, having a massive broad ligament degenerated fibroid weighing 6 kg  is presented here.

Broad ligament fibroid even though is the commonest extra uterine leiomyoma site, is rare and more so for a large leiomyoma measuring 30 x 30 cm, and weighing 6 kilograms. They usually present with pressure symptoms resulting in bowel and bladder disturbances, sometimes causing fatal complications like respiratory distress and pulmonary hypertension. Rarely, patients are asymptomatic; such a case is presented here.

A 37 year old multigravida, P1L1MTP1A1, married since 15 years came with the complaints of abdominal distension since 3 years which was gradually progressive. She had undergone an LSCS for transverse lie 10 years back, which was accompanied by tubal ligation procedure. Three years prior she had an MTP. Two months after the MTP, an ultrasound scan was done which showed a large hypoechoic mass (12.1 x 9.1 cm) lesion in pelvis extending into the abdomen. The left ovary was not visualized separately and the differential diagnosis was ovarian mass or a large fibroid. Though she was advised further evaluation and surgical procedure (myomectomy/ ovarian cystectomy) she did not get it done, mainly because she was largely asymptomatic and also owing to financial reasons.
Upon presentation to us, she had only abdominal distension and pain as the main symptoms. She did not have menstrual complaints. On examination, she was stable, with no tachycardia, normal blood pressure and unremarkable systemic examination. On abdominal examination, a mass of approximately 30 weeks in size arising from the pelvis was felt. On per vaginal examination, uterus was anteverted and a large mass from the posterior part of uterus was felt. Bilateral lateral fornices were free. Management was done with the presumptive impression of a large posterior wall fibroid.
Hematological and biochemical parameters were found to be normal. CT scan was suggestive of a large, well defined, solid- cystic lesion  arising  from within the pelvic cavity, extending cranially upto the supraumbilical region, highly suggestive of large sub-serosal or broad ligament fibroid. She was counseled for exploratory laparotomy with myomectomy SOS hysterectomy.
Intraoperative findings showed a large tumor, about 30 x 30 cm in size with large vessels running across it distending the posterior part of the left broad ligament. Mass was seen to be stretching the broad ligament near the left cornua. Left sided uteroovarian ligament and fallopian tube were stretched over the mass. Left ovary and  round ligament looked healthy. 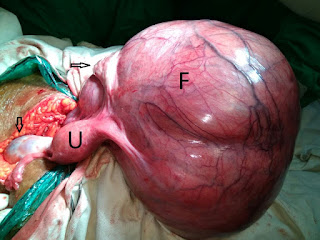 Right ovary was found to be polycystic, right fallopian tube and round ligament were normal. Uterus was normal in size. No adhesions were seen in the lower uterine segment. Bladder was not advanced. Left round ligament was divided and ligated. Access to the broad base of the fibroid was gained from the broad ligament. The fibroid was seen to grow upwards underneath the left fallopian tube. 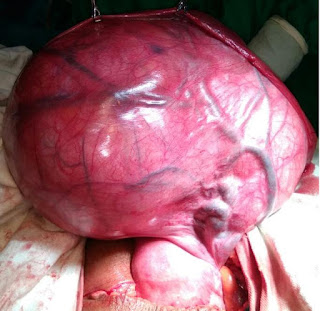 Figure 2. Intraoperative image showing uterus, large fibroid and fallopian tube stretched over the broad ligament fibroid (held with Babcock forceps).
The base of the myoma was seen to extend from the left cornua to above the level of isthmus. Hence, it was not compromising any uterine vasculature. This growth pattern allowed the easy closure of the myoma bed. The mass was enucleated from its pseudo-capsule by taking an elliptical incision around its base. It weighed 6 kg. Large bosselated mass of approximately 30 x 30 cm with thick tortuous vessels running on its surface was removed. Cut section showed multiple degenerated areas with fluid admixed with whorls of smooth muscle fibers. 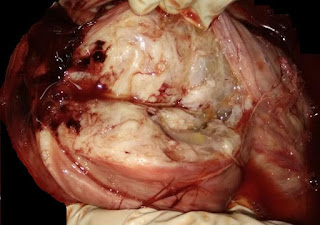 The bed of the myoma was sutured, hemostasis was achieved at systolic blood pressure of 100 mm of Hg. The two leaves of the broad ligament were approximated, after the course of the left ureter was visualized and non-injury was confirmed. The cut ends of the round ligament were also approximated so as to keep the entire myoma bed retroperitoneal. Multiple cysts in the right ovary were punctured, cauterized and the fluid was aspirated. Abdomen was closed. Her post operative condition was fair. She was discharged on day 5 after surgery and sutures that were  removed on day 10 were healthy.

A uterine leiomyomas is the most common tumor of the female genital tract. It can also arise in at extra uterine sites like the broad, round and uteroovarian ligaments. Amongst all the extra uterine sites the broad ligament is the most common area for the development of leiomyomas, the incidence is however <1 % [1].
A leiomyoma is labeled as a giant leiomyoma if it weighs 11.4 kg (25 lb) or more.[2]  In the case presented above, even though the leiomyoma doesn’t qualify as a giant leiomyoma, it is a rare event for a leiomyoma to grow up to the size of 30 x 30 cm, weighing 6 kg and still remaining  asymptomatic. Considering the weight of a full term newborn to range between 2.5 to 3.5 kg and 4 kg birth weight to be macrosomic, a leiomyoma of 6 kg is definitely expected to produce pressure symptoms of constipation, hydroureter or back pressure hydronephrosis. As the direction of growth of the mass was upwards between the left fallopian tube and the ovary, it did not cause any pressure on the sigmoid mesentery or on the ureter.
The world’s largest leiomyoma weighed in record is 63.5kg (140 lb).[3] Large leiomyomas usually present with life threatening complications. In one case,  the leiomyoma weighing 40 kg caused severe pulmonary hypertension and respiratory failure, which required an emergency operation.[4]
Broad ligament leiomyomas are generally asymptomatic but when neglected for long time periods, they have the ability to reach enormous sizes, resulting in pelvic pain, menstrual abnormalities and compression symptoms of bladder and bowel.[5]
In addition to the usual symptoms of leiomyoma, such as pelvic pain, and tumor bulk-related signs, different or uncommon complications are associated with large leiomyomas. Acute limb edema, ulceration due to compression of the iliofemoral vein with associated thrombosis are other unusual symptoms of  large leiomyomas. Obstructive uropathy, hydronephrosis can lead to voiding problems and urinary tract infections.  Uterine leiomyoma can be mistaken for an ovarian malignancy as both the conditions can share a common presentation of ascites, abdominal mass and sometimes even pleural effusions develop indicating a pseudo-Meigs’ syndrome.[6] Significant accumulation of fluid within the ovarian stroma leading to gross ovarian edema can also occur. Grossly, the involved ovary is usually a solid mass which is enlarged and has a smooth tan-white surface. Massive ovarian edema may arise from interference in lymphatic drainage and venous return of the ovary secondary to partial torsion of broad ligament fibroid.[7]
Tumors of the broad ligament can be of epithelial or mesenchymal origin, of which the former are more common. Among the mesenchymal tumors the bulk is constituted by leiomyomas, which can be of two types- false and true. The true myomas do not have a pedicle connecting it with the uterus, while the false type do.[1] The route of surgery is usually an open abdominal type. However, though as yet uncommon,  laparoscopic method for removal of a 2 kilogram fibroid has been reported recently.[8] As reported by few, large leiomyomas presenting with fatal complications require total abdominal hysterectomy with bilateral salpingo-oophorectomy.[9]
In the case presented above, in spite of taking a consent for hysterectomy, the mass was safely enucleated saving the uterus, the fallopian tubes and the ovaries. Though our patient was not keen on a further pregnancy, the performance of myomectomy in a large fibroid may be a fertility enhancing surgery in indicated patients. Reports of conception and successful pregnancy after removal of a large fibroid has been reported.[10]