The clinical course of patients having preeclampsia and eclampsia is often unpredictable. A case of eclampsia who developed multiple seizures in the intrapartum and immediate postpartum period, that required multiple anti-epileptics is described. The concept of “delta hypertension” is mentioned in brief and the features of posterior reversible encephalopathy syndrome (PRES) are discussed.

Magnesium sulphate is the recommended drug for prevention and management of seizures in severe preeclampsia/ eclampsia. When a patient convulses despite being on magnesium sulphate, additional anti-epileptics may be considered, and further neurological evaluation is mandated.

A 23 year old, primigravida, in a non-consanguineous marriage, 40 weeks and 3 days of gestation presented to emergency as a diagnosed case of pre-eclampsia. She complained of abdominal pain and vaginal discharge for few hours. She was perceiving good fetal movements. She was on capsule nifedipine 10 mg 6 hourly, that had been started 2 weeks prior to this presentation when pre-eclampsia was detected. She had taken discharge against medical advice during her prior admission.
On examination, patient was conscious, oriented, and afebrile, with normal pulse rate and a blood pressure of 130/80 mm of Hg measured in the right arm in the supine position. Cardiovascular and respiratory system examination were unremarkable. Abdominal examination showed a full term gravid uterus with live fetus in vertex presentation with a heart rate of 140 beats/ minute (bpm) and minimal uterine activity.  On vaginal examination, internal os was 2 cm dilated, 40% effaced, with vertex at -1 position. Clear liquor was draining. Pelvis was adequate. Urine albumin with dipstick was 2+ and deep tendon reflexes were normal. There were no premonitory signs or symptoms of impending eclampsia. She was then admitted to labor ward, anti-hypertensives were continued, fetal heart sounds, blood pressure (BP), urine output and other parameters were monitored. Investigations (complete blood count, liver and renal function tests, coagulation profile) were sent and were found to be within normal limits. For around 5 hours post admission, highest BP recorded was 140/90 mm of Hg, and uterine activity progressively increased. Then, persistent variable decelerations up to 90 bpm from a baseline of 130 bpm ensued. On vaginal examination internal os was 3 cm dilated, 40% effaced and vertex was at station -1. Decision of emergency cesarean section in view of fetal distress in first stage of labor was taken. Just as she was being shifted to the operation theater, she developed generalized tonic clonic convulsions. The BP recorded immediately post convulsion was 170/110 mm of Hg. Injection magnesium sulphate by Zuspan regimen, (loading dose of 4 grams followed by maintenance dose of 1 gm/hour was started). Tablet labetalol 100 mg was started. Ophthalmology reference taken for fundus examination was suggestive of no papilledema. She and her relatives then denied consent for LSCS for fetal indication. Blood sugar and serum electrolytes were within normal limits at the time of first convulsion. Injection oxytocin was started for augmentation of labor. Within half hour of this, she convulsed again. BP was 140/90 mm of Hg. The interval between the 1st and 2nd convulsion was 1 hour 30 minutes. Injection levetiracetam 1 gram loading dose was given intravenously and the convulsion episode subsided. Injection mannitol 100 ml intravenous 8 hourly was started and tablet labetalol 100 mg orally 8 hourly was continued. Injection magnesium sulphate by Zuspan regime was continued. Oxytocin augmentation was continued and patient delivered vaginally. Apgar score of the neonate was 6/10 at one minute and 9/10 at 5 minutes. Her 3rd and 4th stages of labor were unremarkable. Tablet amlodipine 5 mg was added as her BP recordings remained around 160/100 mm of Hg. She developed a 3rd episode of convulsion 10 hours after her delivery and injection phenytoin 600 mg intravenous bolus was given. CT scan of the brain showed hypodensity mostly involving the white matter of the left frontal lobe. A similar hypodense area involving the left temporal lobe and the left external capsule were also seen. (Figures 1 and 2). She was further managed in the medical intensive care unit (MICU). Within 1 hour of the 3rd convulsion she convulsed again for the 4th time. Her BP was 170/100 mm of Hg. Injection midazolam was given and convulsions subsided. Injection magnesium sulphate, levetiracetam and phenytoin were continued. Oral labetalol and amlodipine were continued and tablet hydralazine 25 mg was added in view of persistent blood pressure of 170/100 mm of Hg. Neurologist advised to continue the same treatment.  Blood pressure stabilized and normalized gradually over 3 weeks. She did not convulse again and she had no residual neurological deficits on discharge. She was discharged on all the three antihypertensive drugs and levetiracetam. 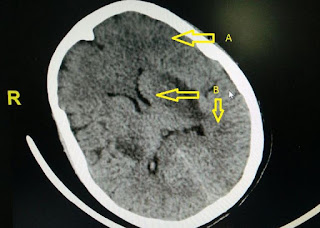 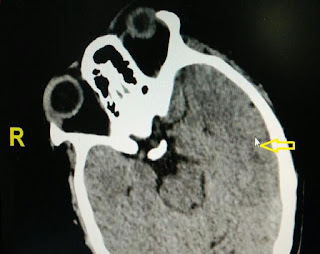 The definitive management of eclampsia is delivery. The drug of choice for control of seizures in eclampsia is magnesium sulphate. Compared to other anticonvulsant agents, magnesium sulphate also reduces the risk ratio of recurrence of seizures and improves maternal and fetal outcomes.[1]
After the initial administration of 4 grams of magnesium sulphate, if a repeat convulsion occurs, the first step is to administer an additional 2 grams of magnesium sulphate. However, this was not administered in our patient. Very few patients require such an additional dose. If convulsions occur despite this, additional anticonvulsants are indicated. In the original study conducted in Parkland hospital which studied the effectiveness of magnesium sulphate, only 5 patients out of 245 patients required additional anticonvulsants to control eclamptic seizures.[2]
Our patient required two additional anticonvulsants; levetiracetam and phenytoin sodium and a benzodizapine.  Benzodizapine midazolam a category ‘D’ drug, is not a usual drug used as an anticonvulsant in pregnancy. Levetiracetam is a newer broad spectrum antiepileptic agent which is being considered to be of good safety in pregnancy. The drug appears to be better than carbamazepine and valproate, with regards to long term neurological outcomes in the fetus also.[3, 4, 5] The drug has also been used safely in the Indian tertiary care setup for recurrent seizures with good outcomes.[6]
Our patient had a sudden rise in blood pressure from 150/90 to 170/110 mm of Hg. While the criterion of only an increase in blood pressure is no longer used in the definition of preeclampsia,[7] the concept of “delta hypertension” is still approved in modern obstetrics. This refers to a sudden increase in blood pressure in otherwise normotensive women during late pregnancy, labor and postpartum period.[8]  Such a delta hypertension has been proven to have higher incidence of readmission in postpartum period with severe preeclampsia/eclampsia.[9] In the study reported by Tank et al, eclamptic patients with high mean arterial pressure had been shown to have adverse neurological outcomes.[10]
Our patient had a neurological complication, namely “posterior reversible leukoencephalopathy syndrome”. A term coined by Hinchey et al, is described as the presence of neurological and radiological signs, with associated confusion, headaches, arousal problems, occasionally coma, visual disturbances and generalized seizures.[11]
In our patient, the highest blood pressure recording was of 170/110 mm of Hg. Though hypertensive emergencies and eclampsia are characteristic causes of PRES, it can occur in seemingly normotensive patients also. While PRES commonly occurs at term, extremely rare cases presenting during the first trimester as a complication of hydatidiform mole [12] and also in late postpartum period [13] have been described.
Our patient who underwent CT brain, had the classical neuro-radiological findings of PRES that is reversible vasogenic subcortical edema without infarction. MRI brain is superior to  CT brain in identifying the typical abnormalities of PRES. Upon prompt control of the blood pressure or of the offending disease process, the condition appears to resolve and this can be identified by repeat neuroimaging .
One theory that hypothesizes its pathogenesis states that when severe hypertension exceeds the physiological limits of auto regulation, breakthrough brain edema occurs, precipitating the condition. However, it was earlier believed that hypertension led to cerebral auto regulatory vasoconstriction and in turn led to ischemia, finally resulting in brain edema. The posterior circulation is preferentially affected.  Owing to this, visual disturbances may be a common phenomenon. However, our patient did not report any visual complaints. The radiological imaging in our patient showed more anterior involvement than posterior involvement, which is more classical of PRES due to malignant etiologies rather than obstetric etiology.[14, 15] There exists a beneficial effect of magnesium sulphate in PRES also. Naidu et al studied cerebral artery flow velocity waveforms using ultrasonography by trans-temporal approach. They determined that the wave forms suggested a significant reduction in cerebral vasospasm among those treated with magnesium sulphate than when compared to other anticonvulsant medications.[16]
Though this patient required multiple anticonvulsants, it constitutes a rare scenario. Blood pressure monitoring should continue in the postpartum state also. The above case fits into atypical eclampsia but typical PRES, a condition which is reversible, has classical clinico-radiological features and has good prognosis.