Intra uterine contraceptive devices (IUD’s) like Lippes loop were intended for long term use, and are retained for years inside the uterine cavity. Post menopausal women have often presented with Lippes loop in situ but having completely forgotten about its insertion. We report a case of Lippes loop removal in a 70 year old, postmenopausal, woman who was unaware of its insertion. She was complaining of pain in abdomen and vaginal discharge. Considering the complication of long term use of this device, it was removed hysteroscopically.

Intrauterine contraceptive devices have been used from the 19th century.[1] In 1960, Dr. Jack Lippes made his first model of the ‘Double-S’ intrauterine contraceptive device named as “Lippes Loop” (LL). It was a flexible polyethylene plastic loop of appropriate size for the uterine cavity which subsequently went on to become the gold standard for other IUD’s to be compared with.[2] These early IUD’s like Lippes loop were intended for long term use until even after menopause.[2] Literature has presented a large and varying number of side effects & complications after long term use of any IUD. Here, we report a case of diagnosis and hysteroscopic removal of a Lippes loop in a 70 year old woman who had no idea about its insertion and presence.

A 70 year old menopausal, parous woman, came to our hospital out patient department with the chief complaints of pain in abdomen and a lot of vaginal white discharge since last 5 months. She did not give any history of use of any kind of contraceptive. On per speculum examination cervix was atrophic and a lot of curdy white discharge was present. No thread was seen during the speculum examination. A PAP smear was taken and an ultrasonography (USG) scan of the pelvis was advised. On USG, an echogenic substance was identified suggestive of Lippes loop. A radiograph of the pelvis was obtained to confirm the diagnosis. It showed the loop clearly. As the thread was not visible outside the cervix, a decision for removal under anesthesia was taken. 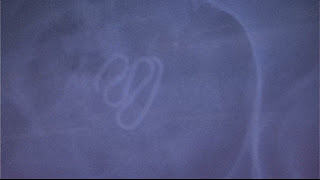 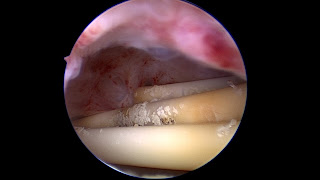 Retrieval was not achieved even after trying removal with a simple artery forceps. After failure to remove with simple curettage also, hysteroscopy was done, wherein the loop was clearly identified and removed with a hysteroscopic grasper. 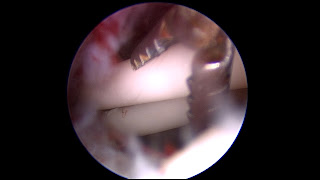 Figure 3. Removing the loop with a hysteroscopic grasper.

Endometrial curettage was also sent for histopathological examination and both endometrium and PAP smear turned out to be negative for malignancy.

Lippes loop was an inert IUD intended for long term use till menopause, but today, it is no longer in use having been replaced by the now popular copper bearing devices introduced in the 1970’s. Pregnancy rates decreased with increase in length of use. The probability of ectopic pregnancy was observed to be constant and it had a 1 in 10 chance, if the device remained in situ for more than three years.[3] Though infections were common within the first year of inserting the device, they could occur at anytime.[4] Actinomycosis, as such is a rare cause of pelvic inflammatory disease (PID). However, it is associated to IUD insertion as few cases of PID due to Actinomycosis have been reported in IUD users in literature.[5] It has been documented that removal of a long standing IUD becomes very difficult because of accumulation of small calcium deposits thus causing corrosion in the plastic of the IUD. This in turn weakens the strength of the device and its tail making it friable to break. The longer the loop is kept inside, it has a tendency to bury itself in the endometrium thus causing difficulty in its removal. Removal in such circumstances is associated with pain and bleeding. Removal can become difficult after menopause as there is atrophy of the uterus and the cervical canal.[6]  Pukale et al  reported a similar case who underwent hysterectomy for PID ( pain in abdomen, fever with chills, foul smelling vaginal discharge, and feeling of right sided abdopelvic mass ) due to a forgotten Lippes loop. Cut section of the uterus following hysterectomy showed a deeply embedded loop.[7] A forgotten IUD can lead to various problems including infertility, postmenopausal bleeding,  abdominal pain, pelvic inflammatory disease, and lastly fever which may be due to actinomycosis. Since long, literature has mentioned a lot of side effects and various complications of using various IUD’s. These complications consists of ectopic pregnancy, bowel obstruction, uterine perforation, infections and also death. WHO recommends removal of a misplaced IUD as soon as a diagnosis has been made.[8]

Case reports are the only helpful source of documentation when there is lack of  sufficient literature and evidence. Reporting of rare cases, especially of a rare complication, or events associated with prolonged IUD use should be promptly reported and also widely encouraged.
After reviewing the literature and various case reports, our opinion is to remove the IUD even if it is inert and not causing any symptoms as complications cannot be predicted. The complications occurring due to this, although rare, are very severe and unusual causing a lot of morbidity to the patient.