Successful Management Of A Misdiagnosed Case Of Transverse Vaginal Septum

Transverse vaginal septum is a mullerian duct anomaly resulting from its incomplete fusion with components of urogenital sinus. Herewith, we report a case of transverse vaginal septum seen in a young unmarried girl that was misdiagnosed in a private hospital to be imperforate hymen and was operated thrice there for the same. There was scarring and complete stenosis of the septum with reformation of hematometra after every surgery & she was referred to KEM with a 14 week size mass arising from the pelvis along with anemia. She was diagnosed to have transverse vaginal septum and definitive management for the same was done after which she did not have recurrence of any symptoms.

Mullerian duct anomalies occur in about 5.5% of all women.[1] There can be defects of resorption between mullerian ducts and urogenital sinus or defects of fusion between the paired mullerian ducts. Transverse vaginal septum is a mullerian duct anomaly resulting from its incomplete fusion with components of urogenital sinus.[2] The septal thickness and location can vary but most often septum can be found in the upper or the middle part of the vagina.[3] Clinical presentation depends on whether it is complete or partial. In the presence of complete septum accumulation of menstrual blood can result in hematocolpos or hematometra. Such shes usually present with cyclic lower abdominal pain and ultrasonic findings of hematocolpos or hematometra. Occasionally a lower abdominal mass (hematometra) is palpable. Cryptomenorrhea, dysmenorrhea and dyspareunia are the usual presenting complains in cases of incomplete septa where partial seepage of menstrual blood can occur.

A 14 year old unmarried girl came to our hospital with cyclical abdominal pain and irregular menstruation for two years as her chief complaints. She initially went to a private hospital nearly 1 year back where she was diagnosed as imperforate hymen. Incision and drainage was done. She had normal menses for 2 cycles but again had amenorrhea and cyclical abdominal pain. She was advised CT pelvis but it was not done due to non availability of CT scan in that hospital and the same procedure was repeated, she had normal menses for 6 months. On the third recurrence of similar complaints, she was referred to our tertiary center for further management. She presented to the emergency room with complaints of severe abdominal pain. On examination general condition was fair with normal vital parameters. Breast development was normal, tanner stage 3. Secondary sexual characters were well developed.
On per abdomen examination there was a globular swelling of 10x8 cm in the left lower abdomen. On local examination after separating the labia a blind pouch was seen. On per rectal examination a midline mass of 14 weeks in size arising from the pelvis was felt. Routine investigations were done which showed hemoglobin of 8.2 gm%, complete blood count of 8,700/mcL,  and platelet count of 2.12 lakhs/mcL. Liver and renal function tests were normal. Ultrasonography of the pelvis showed a 4.6x3.2x5 cms size uterus, endometrial thickness of 9.6 mm containing fluid with internal echoes. A 11.2x7.3x6.3 cm collection in the vaginal cavity was seen communicating with endometrial cavity through the cervical canal suggestive of hematocolpos. CT pelvis was done which showed gross distension of the vaginal and endometrial cavity with fluid within, consistent with transverse vaginal septum. (Figure 1) She was posted for examination under anesthesia with excision of the transverse vaginal septum. Intraoperatively there was a blind pouch of vagina with a transverse vaginal septum in the middle one third of the vagina with a fibrous band.  Per rectally a bulge of 14 – 16 weeks was felt anteriorly in upper two thirds of vagina. Foley’s catheter was inserted. Care was taken to avoid injury to the urethra anteriorly by palpation of foley’s catheter and the rectum posteriorly by insertion of a finger in the rectal canal. Transverse incision was made through the vault of the vagina and around 500 ml of altered blood and blood clots were drained. Edges of the septum were excised, to prevent stenosis during the phase of epithelialization, vaginal mold was inserted and changed in operation theater after a week , after which she was taught to insert the mold for another two weeks before discharge. She continued with daily self-dilatation and was seen later monthly in the OPD.  She was taught to change the mold periodically. Vaginal mold was used by her for 6 weeks after which complete healing occurred. She followed up for 4 months and had normal menses every month since then. 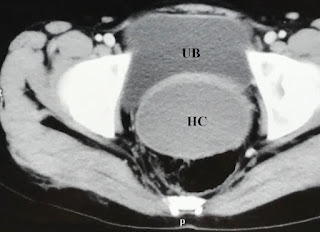 The internal female reproductive organs are formed from mullerian ducts and sinovaginal bulbs arising from urogenital sinus by a series of dynamic processes involving differentiation, migration, fusion and canalization. Interruption or dysregulation of any of these processes can result in mullerian duct anomalies.[4] Cranial end of mullerian ducts persist as fallopian tubes and caudal end of mullerian ducts fuse together to form the uterus, cervix and vagina.  The upper part of the vagina is formed from the fused mullerian ducts and the lower part is formed from the sinovaginal bulbs.
Transverse vaginal septum is a defect in resorption of the vaginal plate between the fused mullerian ducts and urogenital sinus. Prevalence varies from 1 in 30,000 to 1 in 84,000.[5] The septum can be seen in superior vagina in about 46% cases, mid vagina in 40% and lower vagina in 15%. The septum is composed of fibromuscular connective tissue and vascular elements. It can be associated with genitourinary, musculoskeletal and cardiac defects.
Clinical examination which includes vaginal & rectal examination along with ultrasound  helps to diagnose patients with mullerian anomalies. It helps in delineating presence of all structures, presence of hematocolpos and its quantification. Three dimensional ultrasonography has a higher specificity and sensitivity than routine ultrasonography in diagnosing mullerian anomalies.[6,7] Gold standard for diagnosing mullerian duct anomalies is MRI examination. It has a specificity ranging from 96-100 %.[8] It also helps in visualizing presence of ovaries, any associated renal anomalies and any accumulated retrograde menstruation. In transverse vaginal septum, the septum can be fibrous, muscular or a mixture of both. Fibrous septa are seen as low intensity signals on T2 weighted images and muscular septa as intermediate intensity T2 signals.[9]
Treatment of vaginal septum is resection of septum and drainage of accumulated menstrual blood followed by vaginal mold placement to prevent restenosis. In cases where diagnosis is made post puberty absence of vaginal segments can lead to difficulties in reanastomosis.[10] In such occurrences, simple excision and dissection through loose tissue is done to create a neovagina.