Fetal well being is conventionally evaluated by assessment of fetal heart rate (FHR) patterns. A nonstress test (NST) is a noninvasive and commonest cardiotocographic method of assessment of fetal well being  antenatally. FHR is recorded electronically after 26-28 weeks of gestation, with the mother at physical and mental rest. The test is said to be reactive and the fetus is said to be well if there are at least two FHR accelerations of at least 15 beats per minute (bpm) lasting for at least 15 seconds in a 20-minute period. Variable and late FHR decelerations are suggestive of fetal compromise. When a reactive NST and FHR decelerations are found in the same FHR recording, interpretation becomes difficult. A case of co-existence of a reactive nonstress test and variable decelerations is presented.

A 24 year old primigravida presented at term. Her due date was 4 days away. Her past medical and surgical history was not contributory. Her general and systemic examination showed normal findings. Obstetric examination showed a single intrauterine fetus of 36 weeks' size in vertex presentation. The amount of liquor was adequate. Her pelvis was adequate. Her Bishop score was 4. A nonstress test was obtained. It showed one acceleration (green arrow) with fetal movement in 20 minutes and repetitive variable decelerations (white arrows) as seen in figure 1. An ultrasonographic scan (USG) was obtained. It showed a single intrauterine fetus of 36 weeks' size in vertex presentation. Her amniotic fluid index was 6. No abnormalities of the umbilical cord were seen, such as cord presentation, loops around the fetus or true knots. Her hematological and biochemical tests for fitness for anesthesia showed normal results. Tests for syphilis, HIV, hepatitis B and C were negative. In view of mild fetal growth restriction and presence of  repetitive variable decelerations, a No. 16 Foley's catheter was inserted into the cervix, its fully inflated balloon placed just above the internal os, in order to ripen the cervix for induction of labor. The catheter was expelled spontaneously after 6 hours. The cervix was 3 cm dilated and 30% effaced at that time. Artificial low rupture of membranes was done. The amniotic fluid was scanty and thickly meconium stained. Fetal cardiotocography showed repetitive variable decelerations and no acceleration of FHR. An emergency cesarean section was done. A male child weighing 2300 g was born, with an Apgar score of 8/10 at one minute and 9/10 at 5 minutes. The mother made an uneventful recovery postoperatively. Mother and baby were well at the time of discharge after 5 days, and at first follow-up after two weeks. 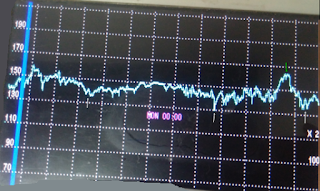 Co-existence of FHR accelerations and variable decelerations is not clear. The rate of operative delivery is increased in the patients who show such a pattern of FHR.[6-11] While the FHR acceleration indicates that the fetal autonomic system is responding to proprioceptive stimulation and fetal heart is capable for responding to resultant sympathetic stimulation, variable deceleration of FHR indicates that there is umbilical cord compression. Such compression over a prolonged period compromises fetal well being and can result in fetal death. It is not clear when FHR accelerations would disappear in this process. But it is likely to be a late process, as hypoxia has to be severe enough to cause such a loss of accelerations, while hypoxia due to umbilical cord compression is intermittent, and the fetus is well in between such decelerations. The presence of umbilical cord copmression which is not treatable is an indication for emergency delivery of the fetus to avoid further compromise of its well being. False positive variable decelerations of FHR do not occur. Thus their presence should be considered an ominous sign, the gravity of which cannot be negated by the presence of FHR accelerations. In the case presnted, additional evidence of meconium in the amniotic fluid was the deciding factor for immediate delivery of the fetus.