Cysts in the female are a not uncommon condition. Most of the cysts are ovarian, and most of those are functional. Other cysts in the ovary are non-neoplastic or neoplastic – benign or malignant. There are a large number of other sources of cystic lesions in the pelvis. We present an unusual case of a peritoneal inclusion cyst which developed in a woman who had undergone a hysterectomy in the past.

Finding a cystic lesion in the female pelvis is a not uncommon occurrence in gynecological practice. Most of them are detected clinically in symptomatic and sometimes asymptomatic women. Some of them are detected during pelvic ultrasonography (USG). These cysts are either in the ovary or are extraovarian in origin. Ovarian cysts are functional, non-neoplastic (such as endometriotic) or neoplastic – benign or malignant. Pelvic cysts not of ovarian origin can be paraovarian cyst, peritoneal inclusion cyst, hydro- or pyosalpinx, sigmoid mesocolon cyst, colonic duplication cyst, cystic degeneration of a leiomyoma or adenomyosis, hydatid cyst, lymphocele, pelvic hematoma, pelvic abscess, lymphangioleiomyomatosis, lymph nodes with cystic degeneration,  spinal meningeal cyst,  retrorectal developmental cyst, cystic lymphangioma or hemangioma. An unusual case of peritoneal inclusion cyst  is presented here.

A 38year old woman, married for 22 years, presented with mild chronic pain in left part of lower abdomen for 3 months. She had 3 normal deliveries in past, the last delivery being 15 years ago. She had undergone a puerperal tubal ligation operation 18 eyars ago, and an abdominal hysterectomy 8 years ago for abnormal uterine bleeding at another hospital. She gave a history of epilepsy, cerebrovascular accident hypertension and bronchial asthma. These conditions were well controlled. Her general and systemic examination revealed no abnormality. Abdominal examination showed an infraumbilical midline scar of a previous laparotomy and an infraumbilical transverse scar of puerperal tubal ligation. There was no tenderness, guarding or rigidity. Speculum examination of the vagina showed no abnormality. Bimanual pelvic examination showed a 4-5 cm diameter nontender cyst in the left fornix.

Pelvic ultrasonography showed a 6.9x5x7.8 cm diameter cystic, unilocular mass above the vaginal vault. There were no solid areas within it. The ovary was separate from the mass. Abdominal ultrasonography showed no abnormality. Her CA125 level was 16.4 U/ml. Her chest radiograph, electrocardiogram, and biochemical investigations for fitness for anesthesia showed normal findings. An exploratory laparotomy was performed. A 5 cm diameter cyst was found between the left ovary and fallopian tube on one side and the sigmoid mesocolon on the other side. It was dissected away from the sigmoid mesocolon. It was firmly adherent to the left broad ligament. The ureter was found to be medial to its lower part. The top of the cyst was opened and clear fluid was drained. The lining epithelium was smooth. There were no nodules or solid areas in its wall. The top of the cyst was excised and hemostatic sutures were placed in its edges. The patient made an uneventful recovery. Histopathological examination of the cyst wall showed mainly collagenous tissue bundles, loose connective tissue and a few blood vessels. There was no epithelial lining found on the inner surface of the cyst. 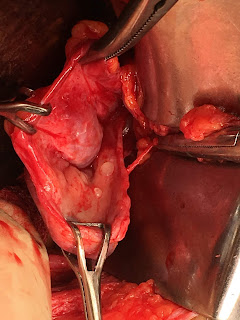 Figure 1. Inside of the cyst. 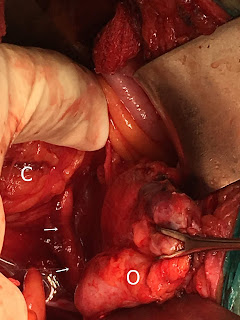 Figure 2. Relation of the cyst (C) to the left ureter (white arrows) and left ovary(O).

A cystic lesion in the female pelvis is most commonly an ovarian cyst. Usually the diagnosis clinically evident, but it not possible to differentiate it from other cystic adnexal structures like a paroophoron cyst, hydrosalpinx and chronic pyosalpinx. A hydrosalpinx or a pyosalpinx is usually small or moderate in size, while ovarian cysts can be small, medium or large. Functional ovarian cysts are small. Neoplastic cysts can be very large, such as mucinous cystadenoma. A small cyst is lateral to the uterus, a moderate cyst displaces the uterus to one side and usually forward. A dermoid cyst has a long pedicle and can be found anterior to the uterus. A large cyst lies on top of the uterus and its side cannot be made out on clinical examination. Imaging techniques like USG, computed tomography and magnetic resonance imaging are quite useful in making the diagnosis. CT and MRI show the cyst to be close to, but separate from the ovary. MRI shows a homogenous structure with low signal intensity on T1-weighted images and high signal intensity on T2-wieghted images. A torsion may cause  a high signal intensity on T1-weighted images.
A peritoneal inclusion cyst is a mesothelial lesion which islocated around the ovary, but separate from it. It is usually associated with abdominal or pelvic surgeries or inflammation. It is usually small (up to 1 cm in diameter), but sometimes it can be larger (up to 30 cm in diameter). It contains clear or yellow fluid. It is lined by flat epithelium in single or multiple layers.

An ovarian mass should first be excluded before giving an interpretation of a mass as a peritoneal inclusion cyst. The imager should look carefully for a normal ovary (either within or at the edge of the mass) when presented with a septated cystic adnexal mass. If a normal ovary is not visualized, an ovarian neoplasm is considered the most likely diagnosis.

A hematoma and a pyosalpinx are acute conditions and are associated with acute pain. The former has features of predisposing conditions and pallor. The latter is associated with fever and tenderness on palpation. A chronic pyosalpinx may be asymptomatic. USG shows a hydrosalpinx as a tubular or corkscrew-like thin-walled structure separate from the ovary. It may look like a cogwheel on transverse image. A pyosalpinx looks similar, but its walled are thick.

Acute cystic degeneration of a leiomyoma is a painful condition. The leiomyoma is usually intramyometrial, causing tenderness and cystic feel of the uterus on bimanual pelvic examination.  A pedunculated leiomyoma with cystic degeneration can be distinguished from an adnexal cyst only on imaging.[1] An adenomyoma is associated with abnormal uterine bleeding, severe secondary dysmenorrhea, and a tender and cystic feel of the uterus.[2]

Peritoneal inclusion cysts develop in response to peritoneal injury due to endometriosis, infection or surgery.[3]  They are small to medium in size, thin walled, and anechoic on USG. There may low-resistance flow within the septations on color Doppler USG.  CT and MRI show uni- or bilateral cystic lesions with attenuation.

Retroperitoneal cystic lesions are uncommon in the pelvis. They displace structures forward, both clinically and on imaging. These lesions include  spinal meningeal cyst and  retrorectal developmental cyst. CT and MRI are useful in making their diagnosis.[8,9]

The cyst in the case presented was close to the ovary and was not arising from the fallopian tube. Thus it could be called a paraovarian cyst. Byt paraovarian cysts arising from the epoophoron or paroophoron are in the mesosalpinx while this was outside the broad ligament. It was closely related to the outer surface of the posterior leaf of the broad ligament and external surface of the sigmoid mesocolon. But it was not originating from the sigmoid mesocolon. It did not have any epithelium lining its inside. Since it did not have intestinal mucosa and smooth muscle, it was not a duplication cyst of the colon. After exclusion of all the other types of cysts, the cyst in the case presented was diagnosed as peritoneal inclusion cyst. [10,11] It developed after a hysterectomy. There were pelvic adhesions as are found with an inclusion cyst. However it did not have any epithelium lining it, while an inclision cyst is lined bya flat epithelium. Absence of epithelium cannot be explained. The cyst possibly had a lining epithelium, which underwent atrophy due to pressure of the fluid inside the cyst.