Large Fibroid In A Young Girl

There can be multiple causes of vague, generalized abdominal distension in a young woman. Using clinical history, examination findings and investigations, diagnosis as to the origin of the mass can be made. In case of a uterine origin, fibroid (leiomyoma) is the commonest diagnosis. Although some cases can also be treated using other methods including medical management and minimal access surgery, major surgery is the only treatment option in most cases. Here we discuss a case of a large leiomyoma in a 21-year-old patient managed with myomectomy.

Leiomyomata (fibroids) are benign, monoclonal proliferation of smooth muscle cells of the myometrium containing varying amounts of fibrous connective tissue. They are the most common tumors of the uterus and the female pelvis. They can also arise from smooth muscles and extrauterine sites like the broad ligament, round ligament[1]. Rare cases of abdominal wall fibroids are also reported.[2] The formation of the myomas is still not understood well, but are now thought to be linked to genetic factors and to proteins that may be responsible in stimulating their growth. We are reporting the case of a young girl with a large fibroid.

Case Report
A 21-year-old unmarried girl presented with complaints of vague distention of abdomen and discomfort in lower abdomen for six months. She had no menstrual complaints nor any other significant past medical or surgical illness. On examination, patient was conscious oriented, vitally stable. There was uniform abdominal distension, a mass of around 32 weeks size was palpable. The consistency was firm and the mass had smooth contours. It was not ballotable from side to side. The lower end of the mass could not be reached which confirmed the pelvic origin of the mass.

All routine blood investigations, hemogram, liver and renal functions, electrolytes of the patient were within normal limits. Ultrasound of the abdomen and pelvis showed a large fibroid in the posterior wall of the uterus of 15x16x10 cm size, pushing the urinary bladder down. MRI of the abdomen was asked for, in order to delineate the course of the ureters, and also to rule out possibility of malignancy. The report confirmed a large subserous fibroid with no other remarkable findings in the remaining abdominal organs. Treatment options were reconsidered and consulted with the patient and her family, who then opted for operative intervention as advised.

The abdomen was opened with a vertical midline incision extending above umbilicus for adequate exposure. Intraoperatively, a large (20x21 cm) fibroid was seen, one of the possibilities was a broad ligament fibroid (figure 1). 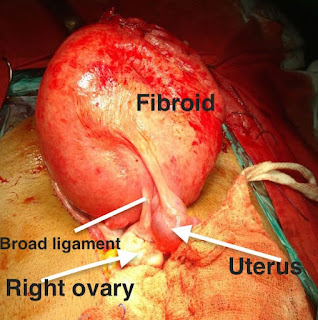 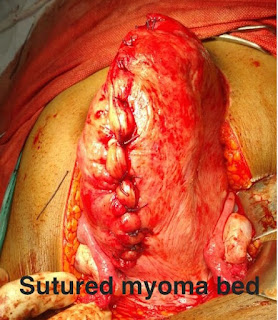 After approximation of the two leaves of the broad ligament, hemostasis was checked and the abdomen was closed in layers. Cut section showed multiple whorls of smooth muscle fibres. Postoperative course of the patient was uneventful. The mass was then confirmed to be a leiomyoma on histopathology.


Fibroids in adolescents might originate from intrinsic abnormalities in myometrium, congenitally elevated sex steroid level and from endometrial injury acquired during menstruation.[3] They are more common in women of reproductive age group however they are an important differential in adolescents with pelvic masses. Wright et al reported a case of leiomyoma in adolescent, in which a cytogenetic study performed in the resected tumor was suggestive of a translocation between chromosomes 12 and 14.[4]

The management of fibroids should be tailored to the needs of the patient and the clinical presentation. Symptom relief, reduction in size of fibroid prior to surgery, and patient willingness for management by conservation are the factors to be taken into consideration before offering medical management. Surgical treatment can be offered to patients to young patients who are symptomatic – for example, having abnormal uterine bleeding or fertility issues.
Myomectomy, though invasive, is often the most appropriate treatment as it is curative with relief of symptoms, it preserves fertility and doesn’t interfere with the hormonal milieu of the young endometrium. The recurrence rate of fibroids is low and also, they grow slowly. Ulipristal is a specific progesterone receptor modulator and is causes amenorrhea in 70-80% women, in around 4 days in most women, and has less adverse effects that GnRH analogues. Number of treatment cycles can be decided based on the size of the fibroid and clinical response.[5] In a recent Medicines and Healthcare products Regulatory Agency (MHRA) safety alert, women taking Ulipristal for treatment of fibroids are recommended to have their liver function tests checked monthly, as there are reports of serious liver damage in women undergoing the treatment.

It was an unusual occurrence in our case that the leiomyoma did not cause any pressure symptoms. Also, as it was a false broad ligament fibroid, it didn’t cause any menstrual dysfunction. The patient did not have any significant pain either. There are many challenges that can be faced during myomectomy as was with our case. Proper preoperative workup, surgical and anesthesia team preparedness, availability of blood and blood products in anticipation of massive hemorrhage hold high importance in planning surgical management. Our patient was a young unmarried girl, so the first challenge that came up was preoperative counselling of the relatives regarding need for surgery, future fertility outcomes, need for repeat intervention in case of recurrence, need to convert to hysterectomy if required and the consequences of massive blood loss were explained. Even though consent for hysterectomy was taken, the myoma was enucleated and uterus was successfully saved. Thus, we reduced the chances of potential future infertility in our patient. [6] The largest reported uterine fibroid was weighing 63.5 kgs.[7] Some large fibroids may present with life threatening complications. Apart from the usual complications of pelvic pain, menstrual abnormalities and pressure symptoms, there may be other unusual complications like acute limb edema due to iliofemoral vein compression, obstructive uropathy, hydronephrosis, urinary tract infections and voiding problems. There can also be ovarian edema due to chronic compression on ovarian stroma leading to mistaken diagnosis of ovarian tumor.

Conclusion
Leiomyomas are thus an important differential diagnosis of pelvic masses in adolescents and young women. There is no optimal treatment defined but myomectomy seems to be an unavoidable option in young unmarried women with large fibroids.