A Case Of Advanced Glioma In Third Trimester Of Pregnancy

Abstract
Glioma presenting during pregnancy carries unique challenges to the patient, baby, family, and health care providers. We describe an unusual case of advanced glioma  that was diagnosed for the first time at 34 weeks of gestation. While her medical and obstestric management was associated with a significant ethical dilemma, the mother and fetus successfully survived through the neuorosurgery and the woman delivered a healthy baby spontaneously vaginally four days post decompression neurosurgery i.e. right frontal craniotomy with excision of right frontal glioma. The objective in presenting this particular case is to highlight management of advanced glioma  in pregnancy and determining mode of delivering a baby of a pregnant female with advanced glioma.

Central nervous system diseases, including intracranial tumors, particularly malignant brain tumors and trauma, remain a leading cause of indirect maternal mortality.[1] Primary central nervous system tumors occur in about 6 in 100000 females, but are rare during pregnancy.[2] A study reported the incidence of maternal malignant brain tumors at 3.6 per 1 million live births.[3] The management of pregnant women with malignant brain tumors has not been well evaluated. The present study reports a case of a pregnant woman in the third trimester with a glioma. The patient underwent craniotomy for brain tumor resection under general anesthesia at 36 weeks of gestation and had a spontaneous by preterm vaginal delivery at 36 weeks and 4 days of gestation.

Case Report
A 34-year-old primigravida, married for 1year, with 34 weeks of gestation presented with a complaint of 5 episodes of giddiness with brief period of loss of consciousness over 7 days.  She was evaluated by her neurologist. Her magnetic resonance imaging (MRI) of the brain showed neoplastic etiology, i.e., diffuse infiltrative glioma described as 7X8.5 cm infiltrating mass involving left frontal lobe, left gangliocapsular region, genu and body of corpus callosum, insula and left superomedial temporal lobe with subfulcrine herniation and midline shift to right by 1.5 cm. After multidisciplinary consultation with the obstetrics, general medicine, neurosurgery, neuromedicine and anesthesiology departments, the initial decision was to delay the neurosurgery until after delivery. The patient and her family approved this strategy. The decision was made to treat the patient with dexamethasone and levetiracetam to control the seizures and accelerate fetal lung maturity. The patient’s antenatal profile investigations and anomaly scan result were within normal limit. However, her condition worsened. She showed signs of cerebral edema and increased intracranial pressure. She had five episodes of seizures in the ward which were controlled with intravenous phenytoin and dexamethasone.  She was completely eptonized with phenytoin 100 mg PO q8h and dexamethasone 4 mg q8h. Then a decision to perform left craniotomy with excision of glioma was made for decompression of the brain. Proposed neurosurgery was done under general anesthesia at 36.0 weeks of gestation in supine positon. Fetal heart rate (FHR) monitoring was done intraoperatively. FHR remained about 130 beats per minute (bpm) with no deccelerations. The patient recovered quickly from anesthesia without any neurological deficit and was extubated in the operating room. Few minutes after extubation, FHR baseline shifted to 110 bpm. Therefore continuous fetal heart rate monitoring was done for 4 more hours. FHR increased to 140 bpm 4 hours later. Non stress test done on second day of post operative period was reactive. 72 hours post surgery, the patient went into spontaneous labor. The labour progressed well. A live male child weighing 2.662 kg was delivered by preterm vaginal delivery. The baby cried immediately after birth. The neonate’s Apgar score at 1, 3, and 10 min was 9/10. Oxytocin (20 units) was administered i.v. to improve the uterine contraction. The histopathology report revealed an oligodendroglioma  WHO grade II. The patient was discharged 14 days after surgery. Adjuvant chemo-radiotherapy was planned 2 weeks after surgery. The mother remained in a good condition without any neurological deficit and the baby was kept with the mother and relatives from day one of life. 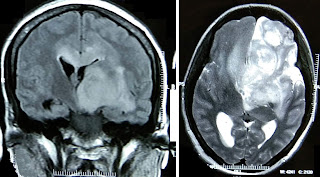 Discussion
Modern treatment has improved prognosis in glioma patients so that more young women with glioma present for management. [4,5]. Peeters et al found in a multicenter case series that there was tumor progression and clinical deterioration  of gliomas during pregnancy, and cesarean section did not improve the outcome in any way. [4] benefit of CS over vaginal delivery with respect to adverse events, in stable women at term. This was confirmed by other non biased studies too.[6,7,8] In a multicenter, prospective case-control study of 129 children, Amant et al found that there was no significant difference in cardiac and neurocognitive outcome with prenatal exposure to different cancers and their therapy. [9] Van Calsteren K et al reported that prenatal exposure to chemotherapy increased incidence of preterm labor and intrauterine fetal growth restriction.[10] The risk of development of congenital malformations was not reported to be increased. However the long term effects were not addressed in these reports. Further studies are required to study such effects. There are some unanswered questions in the management of pregnant women with gliomas. There is no consensus on issues like when a pregnancy should be discouraged, best schedules for monitoring such gravidas and their fetuses, schedules for safe administration of radio-  and chemotherapy to such patients and the best mode of delivery. There is also a need for multicentric registries of such tumors and their management and obstetric and patients' outcomes.
Our patient had a lucky outcome. The time of presentation was at a reasonably advanced gestational age, so that the childbirth had to be deferred only for a few weeks, postponing radio- and/or chemotherapy. Her surgery was successful and there were no neurological postoperative complications. She went into spontaneous labor, progressed and delivered vaginally without any mishap. We have presented this case so that the number of cases of gliomas in pregnancy increases and an analysis of a large number of such cases in future can help one draw meaningful conclusions.

We thank Dr Chagla AS and Dr. Akshay Hadwalkar from department of neurosurgery for neurosurgical management of the patient.