Ovarian cystadenofibroma is a rare benign ovarian tumor. It contains both epithelial and fibrous stromal components. The cystadenofibroma on imaging has often a complex appearance. On imaging, it is visualized as cystic to solid masses.  This may also resemble a malignant tumor. We describe here the case of a 48-year-old woman with an ovarian cystic mass that was diagnosed as a benign cystadenofibroma of the ovary on histopathology report. The patient underwent successful total abdominal hysterectomy with bilateral salpingoophorectomy.

Surface epithelial-stromal tumors are the most common tumors of the ovary. Majority of these occur in women between fourth to sixth decades of life. Benign ovarian serous tumors account for approximately 16% of all ovarian epithelial neoplasm. Approximately 30-50% of them are bilateral. The fibroblastic stromal component is unduly prominent in some serous tumors and appears grossly as white, solid, nodular foci in an otherwise typical cystic neoplasm. These can be classified into benign; adenofibroma and cystadenofibroma, borderline, and malignant adenofibrocarcinoma and cystadenofibrocarcinoma. Cystadenofibromas are one of the rare ovarian benign tumors. These constitute 1.7% of all benign ovarian tumors.[1] These are usually seen in women of age between 15-65 years.[2] They can composed of serous, mucinous, endometrioid, and transitional epithelium. They are bilateral in 15% of the cases.[1]

A 48 year old woman, para 3 living 3, came to gynecology outpatient clinic with a chief complaint of right sided pain in the abdomen for 7-8 months. The pain got aggravated in the last two months. The pain was associated with abnormal uterine bleeding and was cyclical in nature. Her menstrual cycle length was 30 days with last menstrual period four weeks ago, increased and it was associated with passage of clots, and she had secondary congestive dysmenorrhea. She had no significant family history. She was examined in the outpatient gynecology clinic. On general examination, her general condition was fair, temperature was 37ºC, pulse was 78 beats/minute and the blood pressure was 160/90 mm of Hg. Per abdomen examination revealed a palpable mass of around 24 weeks in size which was firm in consistency. Vaginal examination showed a healthy cervix, vagina, and a bulky, minimally tender uterus and a soft, mobile right adnexal mass of approximately 20 cm in diameter. After admission, medicine faculty was consulted for evaluation and management of hypertension. She was started on tablet Telmisartan 40 mg with Hydrochlorothiazide 12.5 mg OD and salt restricted diet. Ophthalmology evaluation was done and there was no evidence of hypertensive retinopathy. Blood investigations were sent. Her hemoglobin was 11gg/dl, leucocytes 8000/cmm, platelets 2.0 lac/cmm, TSH was 1.1 mIU/L, fasting and postprandial blood sugar levels were within normal limits. Urine routine and microscopy was within normal limits. Tumor markers were done. Serum LDH was 290 U/L, CEA levels were 4.7 ng/ml, βHCG was < 0.13 mIU/ml, CA 125 was 39.6 units/ml. Pelvic ultrasound (USG) showed a 19x19x11 cm large adnexal mass on the right side, right ovary could not be separately identified, suggesting a possible ovarian origin. The mass had a cystic component with thick septae and also a solid component without definite evidence of posterior acoustic shadowing to suggest calcification. Minimal intralesional vascularity was identified. There was no free or loculated fluid in the pelvis. Contrast enhanced computerized tomography (CT) was suggestive of 19x12x20 cm complex cystic mass lesion arising from the right adnexa. The lesion was predominantly anterior to the urinary bladder with two loculi within; one of the loculi had hyperdense content within. No calcification, ascites or lymphadenopathy was seen. Features were suggestive of a possible ovarian chocolate cyst. She underwent an exploratory laparotomy. The uterus, fallopian tubes and right ovary were normal. was normal. There was a 18x15 cm ovarian cyst on the left side. There were no adhesions. A total abdominal hysterectomy with bilateral salpingo-oophorectomy was performed. Uterus, cervix, bilateral fallopian tube and ovaries were sent for histopathological examination. On histopathological examination, endometrium was proliferative, and myometrium was adenomyotic.  Cervical epithelium showed immature squamous metaplasic changes. Bilateral fallopian tubes were unremarkable. Left ovarian cyst showed ovarian cyst lined by single layered cuboidal epithelium. Many polypoidal structures with thick fibrous cores lined by single layer of cuboidal epithelium were seen. No complex papillary projections, nuclear atypical, or invasion was seen. Findings were suggestive of left ovarian serous cystadenofibroma. 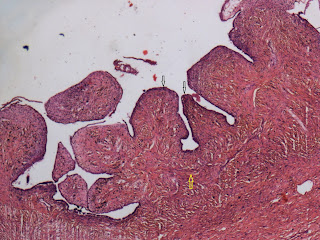 Ovarian cystadenofibroma is a relatively rare benign tumor as compared to ovarian cystadenoma. The actual incidence of ovarian cystadenofibromas is not known.   Primary ovarian cystadenofibromas are usually encountered in women of age group between 15 and 65 years. These tumors account for approximately 1.7 % of all benign ovarian neoplasms.[2] Ovarian cystadenofibroma is a type of surface epithelial tumor. All   the subtypes of these tumors exhibit a fibrous stroma in variable amounts. When the   stroma occupies a greater proportion than the cystic portion, the suffix “fibroma” is added, as in “serous adenofibroma.” The presence of more than 1 cyst over 1 cm in diameter warrants the use of the prefix “cyst” as in “cystadenofibroma.” These tumors are   classified according to the epithelial cell types.
Various types of these tumors are; serous, endometrioid, mucinous, clear cell, and   mixed categories. These tumors are classified as benign, borderline, or malignant, according to the degree of epithelial proliferation and its relation to the stromal components. Most of the reported ovarian cystadenofibromas were benign.[1] There is a strong suspicion of ovarian malignancy when a patient presents with an ovarian cystic mass with solid components. Ovarian cystadenofibromas are notable from   imaging modalities because they often have solid components and thus mimic malignant neoplasm. Some investigators have reported that this type of tumor can be diagnosed as malignant based on imaging alone.[3] Moreover, these tumors may have the gross appearance of a malignant tumor at the time of surgery. A frozen-section diagnosis is helpful in many of these cases because a correct diagnosis of cystadenofibroma in the intraoperative period can save the patient from unnecessary extensive surgery. Therefore, recognition of this tumor by surgeons is of utmost importance. However in this case as the CT scan report was suggestive of chocolate cyst, frozen section wasn’t done. When imaged by ultrasonography or CT, ovarian cystadenofibroma may appear as a complex solid and cystic mass and difficult to differentiate from malignancy. Thus, MRI may be an essential modality for diagnosing this tumor, especially when the characteristic “black sponge” appearance is observed on MRI. The “black sponge” appearance reflects dense fibrous stromal proliferation with scattered small cystic glandular structures on the T2-weighted images. It was considered to be characteristic of the solid components of cystadenofibromas.[4] The sensitivity and specificity of MRI in differentiating benign and malignant tumors are 93.10% and 83.33% respectively.[5] Outwater et al. reported that the dense fibrous tissue of the solid component of cystadenofibroma showed very low signal intensity on T2-weighted images, which are similar to a skeletal muscle.[6] Cystadenofibrocarcinoma, the malignant form, has a solid portion with strong enhancement and higher signal intensity compared to benign cystadenofibromas. Usually, the risk of malignancy increases with an increasing solid tissue portion and thicker septa and contrast enhancement usually facilitates differentiation between benign and malignant lesions. In this case MRI wasn’t done as patient was not affording the same. Ovarian cystadenofibroma being a rare tumor, its occurrence may be difficult to detect. Therefore, ovarian cystadenofibroma is one of the tumors subject to differential diagnosis in which preoperative diagnosis by MRI is essential. In addition, frozen sections may be helpful in the intraoperative assessment of ovarian masses to rule out malignancy and provide guidance for appropriate surgical management. In our case since patient already had menorrhagia with suspected adenomyosis and a large cystic solid ovarian neoplasm, the decision for a hysterectomy with bilateral salpingo oophorectomy was taken preoperatively. Hence we did not consider doing a frozen section on the neoplasm though it would have been better as further staging laparotomy if needed could have been performed.