An episiotomy is to be sutured with absorbable sutures. If non-absorbable sutures are used, they can result in foreign body reaction, and other complication. A case of removal of linen sutures 6 months after delivery is being described here.

A 29 years old, Gravida 2, Para 2, Living 1, Stilborn 1 presented to us in the outpatient clinic with persistent yellowish vaginal discharge since 6 months. She was referred from a private center in view of suspected rectovaginal fistula. She had undergone a vaginal delivery at a primary health care center, outcome being a male stillborn due to birth asphyxia. Three days after delivery, she started complaining of foul-smelling discharge per vaginum for which she was admitted in a private hospital.  For puerperal sepsis with anemia, she was given parenteral antibiotics for 3 days and 1 unit packed red cells was transfused.  She was discharged on oral antibiotics, oral iron and antiseptic ointment for local application at the episiotomy site. After 4 months she again presented with vaginal discharge and persistent abdominal pain to the same clinic. She was investigated and was given clotrimazole vaginal pessary for 7 days. Oral fluconazole, azithromycin, secnidazole single dose combination was also given. Blood investigation reports were within normal limits. Due to persistent symptom of burning micturition, tablet Norfloxacin 400 mg BD was given for one week. X-ray abdomen and ultrasonography of the abdomen and pelvis were normal. After 10 days she was re-examined for persistent vaginal discharge, and due to suspected rent on the posterior vaginal wall, and suspicion of rectovaginal fistula, she was referred to our hospital. Pap smear was sent and it showed inflammatory smear. However, there were no problems with defecation.
General and systemic examination was within normal limits. Abdomen was soft, non-tender. On local examination, 3-4 linen sutures were seen on posterior vaginal mucosa, corresponding to the apex of the previously sutured episiotomy. (Figure 1) Few linen sutures were removed from skin at site of episiotomy. Per vaginal examination uterus was anteverted, and normal size. Few more linen sutures embedded within the mucosa were felt. Per rectal examination was done and the suture site was inspected to see for any rectovaginal fistula. No fecal material or gas bubbles could be expressed out at the suture site and no defect or puckering was felt within the rectal mucosa. For removal of the foreign body, she underwent a vaginal exploration. Episiotomy granuloma excision, removal of the foreign bodies and suturing of the mucosal defect was done.
Procedure was done under spinal anaesthesia.  Vaginal walls were retracted and the linen threads at episiotomy site were clearly visualized and were removed. (Figure 2) Granulation tissue on the vaginal mucosa along the line of the episiotomy was incised and raw bleeding mucosal edges were sutured to each other with polyglactin no 2-0 in continuous interlocking sutures. A mucosal defect with fibrous band was seen about 1cm proximal to the introital edge. (Figure 3) This was released vertically and the resultant edges were sutured. Hemostasis was achieved. She was relieved of her pain. She was reexamined 10 days and again after 4 weeks after the procedure, and she had no complaints. 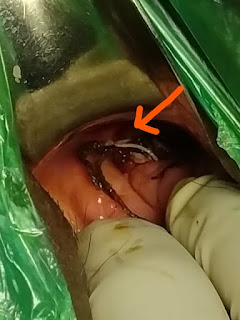 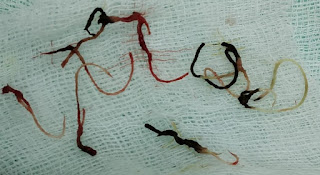 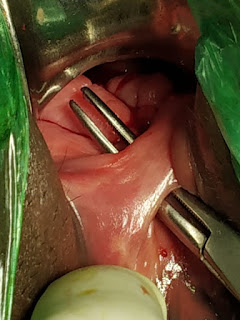 Figure 3. Excised Fibrotic band in lower part of the vagina.

Foreign bodies have the propensity to induce tissue reaction. The severity of reaction depends on the duration of the stay of the material inside the body. This can interfere with wound healing. A balance between strength of suture material to ensure healing as against adverse effect of chronic inflammation is critical.[1] In this case episiotomy was sutured with linen which is cause of granuloma formation. Unnecessary persistence of linen intra-abdominally causing problems have been described almost a century prior.[2]  Episiotomy is to be repaired only by absorbable sutures.[3] Multiple guidelines are available on the suture materials which are allowable for episiotomy, and non-absorbable sutures find no mention in them.[4,5]

Arguably, this case is similar to a retained foreign body, the foreign body here being a non-absorbable suture. All efforts should be taken to avoid such a scenario, since it can lead to potential medicolegal problems.[6]  Long term presence of foreign body in an episiotomy scar has been described by Lapinska et al. In that case, it was a surgical needle.[7] Our patient presented with repeated episodes of local genital tract infection in the first few months post delivery. This should have prompted a search for a foreign body, but since it was controlled with multiple courses of antibiotics, the diagnosis was delayed.

We have presented this case to highlight the fact that non-absorbable sutures are to be avoided in episiotomy suturing. This should be considered as a differential diagnosis in persistent vaginal discharge postdelivery