Chronic Placental Abruption And Its Consequences

Placental abruption is often multifactorial. Associated perinatal outcomes are intrauterine growth restriction, preterm birth, chronic fetal asphyxia and even intrauterine fetal death. In chronic abruption, since the presentation is less dramatic, it is tempting to buy time so that the neonatal outcome is better; but acute abruption frequently occurs in these cases and may jeopardize life. At the same time, neonatal consequences of the long term seepage of blood from subchorionic and retroplacental hematoma into the amniotic fluid are grave. We report a case of multigravida with chronic abruption and subchorionic hematoma from early second trimester; who presented with chronic thrombocytopenia and preeclampsia.

Chronic abruption and subchorionic hemorrhage usually start in the first trimester at a slow rate and continue into the later trimesters. Underlying medical conditions such as hypertension, gestational diabetes mellitus, hyperhomocysteinemia, hyperlipidemia, thrombophilias either genetic or acquired, cocaine abuse or chronic smoking, certain placental developmental pathologies, placentomegaly and placental circulatory disturbances can cause placental hematomas.[1]
Elliott et al defined chronic abruption as delay of at least 7 days after initial hemorrhage before delivery and described a syndrome of chronic abruption oligohydramnios sequence (CAOS). CAOS is when abruption occurs more than 7 days before delivery, there is a documentation of normal amniotic fluid index (AFI) 5-25, and eventual oligohydramnios (AFI < 5) without evidence of spontaneous rupture of membranes is detected.[2] Most frequent condition associated with abruption whether acute or chronic is some form of hypertension in pregnancy. Subchorionic hematoma in first trimester increases risk of abortions, chronic and acute placental abruption, preterm births and even intrauterine fetal deaths. Also fetal lung injury occurs, because of chorioamnionic hemosiderosis due to leak of blood in the amniotic cavity.

A 26 year old 4th gravida with previous 3 full term normal deliveries was referred from a peripheral hospital in view of gestational thrombocytopenia to our institute for antenatal registration at 32 weeks of gestation. She had vaginal bleeding at 14 weeks gestation for which she consulted a private practitioner and was treated conservatively. Her sonography (USG) was suggestive of a large retroplacental hematoma of 45x30 mm and also a subchorionic hematoma of 45x40x17 mm. A week later, she had fever which was diagnosed as Dengue and she was treated for the same at a peripheral hospital. Her hemoglobin at that time was 7.8 gm%, platelet count was 58,000/ cmm and total count was 5,800/ cmm. USG at 18 weeks was suggestive of retroplacental hematoma of 80x24 mm. Liquor was adequate. There was growth lag of 1 week. In her subsequent USG scans the hematoma gradually increased in size to 139x130x91 mm. The cord was seen eccentrically inserted at the lower pole of the placenta. 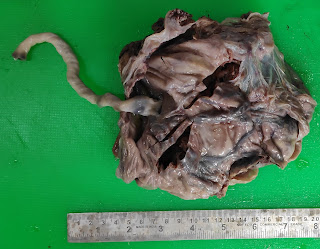 The placental edge was 9 cm away from the internal os. There was also intrauterine fetal growth lag of 1 week. On presentation to our outpatient department, the woman had high blood pressure for the first time; 150/90 mm Hg, with proteinuria and normal deep tendon reflexes. She did not have any premonitory symptoms. Her fundal height corresponded to 28 weeks of gestation. The lie was unstable. Her complete blood count was suggestive of anemia and thrombocytopenia. Hemoglobin was 9.5 gm% and platelet count was 87,000/ cmm. Serum glutamic oxaloacetic transaminase was 89 u/l and glutamic pyruvic transaminase was 22 u/l. INR was 0.9.  Her plasma fibrinogen was 296 mg% and renal function tests were normal. She was diagnosed to have iron deficiency anemia and pseudothrombocytopenia by the hematologist. She was started on tablet labetalol 200 mg twice a day. On day 2 of admission, after steroid coverage; and after confirming availability of adequate blood and blood products, lower segment cesarean section was done for intrauterine growth restriction (IUGR) with transverse lie with pregnancy induced hypertension and chronic abruption in early labor. On the operation table, she had spontaneous rupture of membranes with passage of blood stained liquor and passage of clots per vaginum. Intraoperatively dark red to brown colored liquor was noted after amniotomy, indicative of acute placental abruption superimposed on chronic abruption. She was transfused 2 units of packed red blood cell’s intraoperatively. Intraoperative blood loss was 1000 ml. Prophylactic per rectal misoprostol 800 micrograms was administered. She delivered a preterm female child of 1296 gms. The child had Apgar score of 9/10 at 1 minute but was shifted to neonatal intensive care unit for prematurity and later developed respiratory distress and complications of hypoxia.
After delivery, the placental examination revealed a ‘crater’ which was occupied by a chronic blood clot. The placenta was sent for histopathological examination. 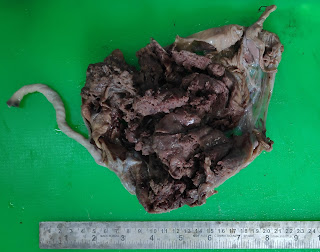 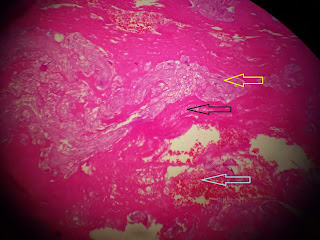 Postoperatively she had persistent mild thrombocytopenia that normalized gradually over 15 days and at discharge the platelet count was 2 lacs/ cmm.. She was given intravenous vitamin B12 as per hematologist’s advice. She was discharged on oral iron and antihyperstenive therapy on day 15. During the neonatal intensive care unit stay, the child had respiratory distress and was diagnosed with hypoxic ischemic encephalopathy. The child was stabilized and discharged after 15 days.

Exact incidence of chronic abruption is not known. In a large Japanese retrospective study the incidence of chronic abruption was found to be 0.05 %.[3]
Our patient was a case of chronic concealed placental abruption apparent from early second  trimester with retroplacental as well as a subchorionic hematoma. It is seen that symptoms of subchorionic hematoma have a bimodal occurrence in the period of gestation and more than three fourths of the pregnancies end up in preterm labor.[4]
According to Norman et al in patients detected with subchorionic hematoma in second trimester, the risk of placental abruption is doubled irrespective of vaginal bleeding in early pregnancy.[5]
Immediately after that the patient was diagnosed with Dengue fever with low platelet counts at around 18 weeks , which probably further contributed to her subchorionic hematoma. Subsequently she developed mild intra uterine growth restriction and hypertension. There is a comparatively bad outcome if the volume of hematoma is more than 60 ml and mortality exponentially increases with placental involvement.[6]
The finding of dark red to brown colored amniotic fluid was due to escape of blood degradation products from the chronic retroplacental clot into the amniotic fluid. Such chronic seepage leads to diffuse chorioamnionic hemosiderosis (DCH).[7] When chronically exposed to degenerated red blood cells, fetal lungs and pulmonary vasculature get damaged leading to chronic lung disease and pulmonary hypertension.[8] Pulmonary complications noted in the baby in this case were attributable to the exposure to blood products. The acute episode of abruption worsened the neonatal outcome adding to the morbidity due to DCH.
Circumvallate placentae are known to be associated with peripheral placental hemorrhage. Though in our case insertion was marginal rather than circumvallate; it also is considered as a risk factor for IUGR, increased cesarean rate. [9]

There are studies showing achievement of latency period of more than 10 days with use of tocolytics in cases of chronic abruption without evidence of maternal coagulopathy; but acute abruption was noted in large number of these cases.[7] Thus close observation for acute abruption is required in maternal interest.

Khare A, Samant PY, Mane A. Chronic placental abruption and its consequences. JPGO 2019. Vol 6 No. 6. Available from: https://www.jpgo.org/2019/06/chronic-placental-abruption-and-its.html