Development of gestational sac in a cesarean scar is on the rise due to the increase in the number of cesarean sections. It is seen in 0.15 % of women with prior cesarean section and 1 in 1800 to 1 in 2500 pregnancies overall.[1,2] Around 6.1 % of ectopic pregnancies are CSP’s.[3] Though rare, awareness of the diagnostic and treatment modalities is vital as it poses high risk for uterine rupture and uncontrollable hemorrhage. We present a case of maternal near miss occurring due to perforation of a prior scarred uterus during MTP which lead to precipitous deterioration of her condition due to likely failure to suspect a CSP in its early stages.

A 38 year old female gravida 4, parity 3, living 1, intra uterine fetal death 2, with previous 2 LSCS was brought to our casualty by a local gynecologist and her relatives in view of intractable bleeding following medical termination of pregnancy. The accompanying doctor gave history that she presented with sonography suggestive of a gestational sac of 5 weeks in the lower uterine segment, cervical length of 3.49 cm and cardiac activity not appreciated due to early pregnancy.  However, as the sac was in the lower segment, a diagnosis of missed abortion was made and she was prescribed MTP pills. However, she had excessive vaginal bleeding for which 2 units packed red blood cells and 2 units fresh frozen plasma were transfused and an emergency check curettage was done at the private clinic. As bleeding was still not controlled an intra vaginal pack was kept and antifibrinolytics were started. On soakage of pack with blood, she was further transfused 5 units of packed red blood cells and 6 units of fresh frozen plasma and was referred to our tertiary center for further management.
On admission, she was in a state of shock, not maintaining her vital parameters. She was immediately started on inotropic drugs. Her vital parameters were revived to pulse 60/ min. and BP 100/70 mm Hg and respiratory rate to 24/ min. Abdomen was guarded. Per vaginal examination revealed uterus of 10-12 weeks in size with clots in situ and 3 blood soaked intravaginal packs were removed. Her hemoglobin (Hb) was 6.7 gm/dL, Total leucocyte count (TLC) was 20,000/ cubic mm and platelet count was 77,000/ cubic mm. A presumptive diagnosis of DIC with septic abortion was made. She was started on parenteral meropenem, piperacillin-tazobactam, metronidazole and vancomycin.
However on imaging, sonography revealed raised vascularity of the myometrium and an organized hematoma in the lower uterine segment. CT scan suggested significant findings, all in the lower uterine segment; 184 cc of collection, tortuous prominent vessels in the anterior wall and severely thinned out walls with 4-5 mm foci suspicious of a uterine rent. The diagnosis was revised to uterine perforation with DIC and she was taken up for an exploratory laparotomy. 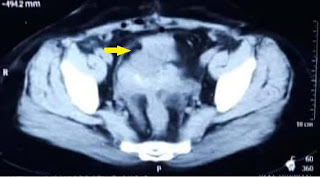 Intra-operatively lower uterine segment was found to be bluish and discolored with ongoing bleeding and severely thinned out anterior wall; only serosa remained. An obstetric hysterectomy was performed in view of irreparably damaged uterus. Three units packed red blood cells and 4 units fresh frozen plasma were transfused intra-operatively. She recovered gradually under observation in ICU and was discharged on post-operative day 14 in a stable condition. 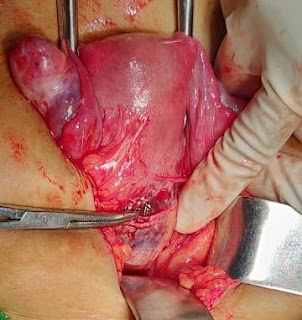 Figure 2. Intra-operative image of uterus. Artery forceps points towards the underlying hematoma in the lower uterine segment just beneath the remaining uterine serosa. 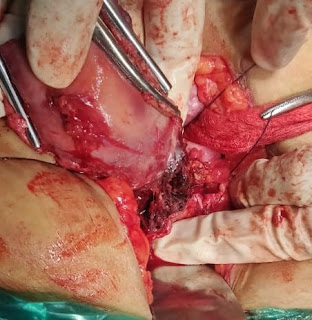 Figure 3. Rent in lower uterine segment at the site of previous scar

Cesarean scar pregnancies can present at any time from implantation to term but have been reported to present more commonly in the first trimester. It can sometimes be difficult to distinguish it from a failed pregnancy or miscarriage.[5] CSP often presents with vaginal bleeding, abdominal pain or may have no symptoms.[1] Similar symptoms are also seen in failed pregnancy. Sonographically, both may show gestational sac in the lower uterine segment thus adding to the confusion. However, an empty uterus, thinned anterior wall and raised peritrophoblastic flow in lower uterine segment on USG and bulging of the gestational sac through the myometrium on MRI indicate CSP, while positive “sliding sign”, lack of color flow on doppler and failure to grow on ultrasound (USG) confirm failed pregnancy.[3,5] In our case myometrial vascularity was also raised on USG. However as the gestational sac was already evacuated before she presented at our hospital, findings such as raised peritrophoblastic flow in lower uterine myometrial area on doppler and histopathological evidence of gestational sac invading the scar could not be verified for confirmation.[3,4]
Our patient was managed on the lines of an early failed pregnancy while the intractable bleeding that followed suggested CSP.  She had also presented with a scan of only 5 weeks pregnancy while the mean gestational age for diagnosis of CSP is 46 days (>6 weeks).[6] With the added USG findings of adequate cervical length and empty uterus it may have been worthwhile in this patient to follow up with β HCG, cardiac activity and rule out invasion of myometrium by gestational sac to confirm the diagnosis of pregnancy failure before prescribing MTP pills. The additional intervention of curettage after suspected pill failure also adds to the likelihood of scar dehiscence and rupture. The culmination of risks involved in the case ultimately resulted in a maternal near miss. Inadvertent use of MTP pills followed by curettage in a likely case of CSP may have lead to both the catastrophic consequences of rupture and life-threatening hemorrhage.
Manoharan et al reported an increased risk of uterine rupture of 5.6 % with the use of misoprostol in a previously scarred uterus.[7] Cesarean scar pregnancies can also lead to rupture uterus as well as morbidly adherent placenta, severe hemorrhage and preterm labor.[8] Various researchers suggest that CSP can be managed conservatively by systemic or local methotrexate, local injection of embryocides, uterine artery embolization; or surgically by dilatation and curettage, laparoscopic/ hysteroscopic removal, open hysterotomy or hysterectomy but highest number of complications are seen with systemic methotrexate, dilatation and curettage and uterine artery embolization.[1] It goes on to prove the caution one needs to take when prescribing MTP pills in the first trimester to a woman with previous cesarean section as the complications can be multiple and even catastrophic.

In prior cesarean section, CSP should be ruled out if gestational sac is implanted in the lower uterine segment. Prescribing MTP pills to such patients can be catastrophic and life-threatening. Simple investigation like USG can diagnose the condition and is the imaging modality of choice, MRI is an adjunct.[1] Treatment needs to be tailored depending on the patient’s hemodynamic status and need for fertility preservation. Finally, all patients should be managed in tertiary care setup with availability of emergency services and blood products.