A 26-years-old woman, underwent exploratory laparotomy with right partial salpingectomy for ruptured right tubal ectopic pregnancy. She returned to our hospital 5 months later as gravida 3, previous one ectopic pregnancy and one spontaneous abortion with 6 weeks and 1 day of amenorrhea. She had lower abdominal pain for 2 days. She had done her own pregnancy test at home, which was positive. Her general condition was fair. Her vital parameters were in normal limits. General and systemic examination revealed no abnormality. Abdominal examination showed a 5 cm long midline vertical infraumbilical scar. Bimanual pelvic examination showed a normal sized uterus and mild tenderness in the right vaginal fornix. Transvaginal ultrasonography revealed no intrauterine gestational sac but a right adnexal mass containing gestational sac of diameter 10.1 mm and fetus of crown-rump length of 3.3 mm. Fetal cardiac activity was present. Her serum beta-hCG  level was 13240 mIU/ml. A diagnosis of right tubal ectopic pregnancy was made. Her investigations for fitness for anesthesia showed normal results. A diagnostic laparoscopy was performed, which showed an ectopic pregnancy in the medial remnant of the right fallopian tube. Omental adhesions were seen to the lateral part of the pelvic peritoneum. Mild hemoperitoneum was seen, which was suggestive of recent rupture of ectopic pregnancy. An exploratory laparotomy was done and excision of right fallopian tubal stump attached to the uterus along with ectopic gestational sac was done. The lateral part of the tube was absent. Modified Coffey’s stitch was taken to cover right cornual stump. The patient's postoperative recovery was uneventful. The histopathology report showed chorionic villi, confirming the diagnosis of an ectopic pregnancy. 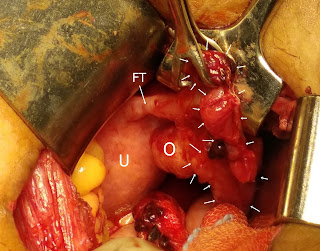 When a tubal ectopic pregnancy is managed by removing the affected segment of the fallopian tube (partial salpingectomy), the medial and lateral segments left behind remain separate in most of the cases. However, a pregnancy may still occur through that fallopian tube, due to recanalization or tuboperitoneal fistula formation (of the medial segment).[5] If the opening in the recanalization or fistula is too small to permit the passage of a fertilized ovum, it gets arrested lateral to that opening and a tubal pregnancy results. Another explanation is transmigration of the fertilized ovum from the other side.[6] Occurrence of an ectopic pregnancy after surgical removal of a tubal ectopic pregnancy in the past is more common on the contralateral side.[7,8]

Our patient was found to have undergone a partial salpingectomy, and had an isthmic stump.  There was no lateral part of the tube. This ruled out a tubo-tubal recanalization as a cause of the ectopic pregnancy. The ectopic was just lateral to the lateral end of the medial segment, suggesting that the cause was tuboperitoneal fistula formation. This risk would have been avoided by covering the cut and ligated ends of the fallopian tube with peritoneum after partial salpingectomy in the past. A modified Coffey’s stitch would have avoided it too.

We recommend partial salpingectomy for the management of a tubal ectopic pregnancy, keeping the cut ends separate, followed by modified Coffey’s stitch or peritonization of the cut and ligated ends of the fallopian tube. This preserves the potential for a future tubotubal anastomosis should the need arise due to loss of the other fallopian tube and the patient desires a pregnancy. Assisted reproduction would be a better option than a tubal reconstructive surgery, but the cost prevents a lot of poor patients from opting for that form of treatment. Adequate peritonization prevents occurrence of an ectopic pregnancy on that side.