Vaginal hysterectomy is difficult when the uterus is enlarged, its shape is distorted by leiomyomas, there is no descent of the uterus, or if there are pelvic adhesions due to past infection, surgery, or endometriosis. For vaginal removal of large uteri, a number of methods are used, such as bisection, Lash procedure, or morcellation. A new approach of displacement of an enlarged uterus to one side and cranially for access to the cornual pedicle is presented. A review of the world literature reveals that this is the first time this approach has been described.

Vaginal hysterectomy is preferred to abdominal hysterectomy because of a number of advantages like absence of an abdominal scar and complications related to an abdominal incision, less postoperative pain, earlier ambulation, lower risk of hypostatic pneumonia and deep vein thrombosis, and shorter hospital stay.[1,2,3]  It is difficult when the uterus is enlarged due to adenomyosis or leiomyomas, its shape is distorted by leiomyomas, there is no descent of the uterus, or if there are pelvic adhesions due to past infection, surgery, or endometriosis.[4,5,6] For removal of large uteri, a number of methods are used, such as bisection, Lash procedure, or morcellation.[4,5,6,7] In some cases of uterine enlargement, these methods fail, and an abdominal hysterectomy has to be performed. Lateral and cranial displacement of the uterus within the pelvis to access the adnexa for clamping the cornual pedicle is a new method for achieving a vaginal hysterectomy in such cases.

The procedure is carried out under a regional block or general anesthesia. Lithotomy position is given and conventional steps of a vaginal hysterectomy are taken up to the division and ligation of the uterine blood vessels.[5,6,7] Owing to the enlargement of the uterine corpus, its fundus cannot be delivered through an open anterior or posterior peritoneal pouch. Then the uterus is bisected in the midline as in the bisection technique used for a difficult vaginal hysterectomy.[7] If it fails to allow the surgeon to reach the fundus, then it is abandoned. Pressure is made on the lateral aspect of the uterine corpus and it is displaced to the other side and somewhat cranially in the pelvic cavity. Index and middle fingers of the other hand are passed behind the uterine cornu of the same side, which has been now brought closer to the midline owing to lateral displacement of the corpus. A clamp is applied to the cornual pedicle containing the round ligament, fallopian tube, and uteroovarian ligament. The pedicle is divided and the clamp is replaced by a transfixion ligature of a No. 1 delayed absorbable synthetic suture material like polyglactin. The cut lateral surface of the corpus is held with tenaculum, Allis’ forceps, bulldog vulsellum and/or Jacob’s clamps. Traction is applied to these instruments such that the corpus swings downwards, rotating around an anteroposterior axis along an arc with its center at the opposite cornu. The uterine corpus delivers through the pelvic outlet when its fundus swings towards the outlet. Then the other cornual pedicle becomes accessible. It is clamped, cut and ligated like the first cornual pedicle. Subsequent steps of hemostasis and closure of pelvic peritoneum and vagina are as in conventional vaginal hysterectomy.[5,6,7] 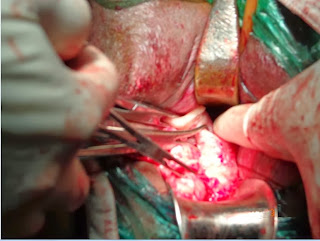 Figure 1. View of the bisected uterus during vaginal hysterectomy. The uterus is displaced to the right and cranially by digital pressure on the left cut surface of the lower corpus. 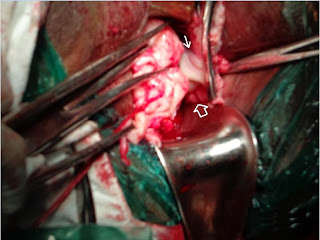 Figure 2. The corpus has been pulled to the right, and the tip of the left index finger (solid arrow) is seen emerging above the left cornual pedicle (hollow arrow) from behind it. 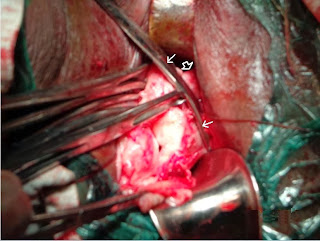 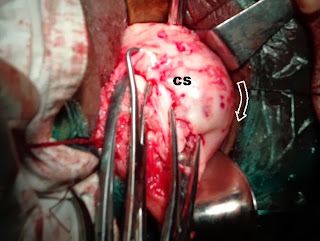 Figure 4. The left side of the corpus has been freed by division of the cornual pedicle. Its cut surface (CS) is held with tenacula and rotated downward  in the direction of the curved hollow arrow. 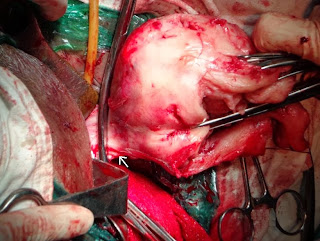 Figure 5. The partially bisected uterus has been delivered vaginally. The right cornual pedicle (arrow) is clamped.

Vaginal hysterectomy can be performed with enlargement of the uterus up to the size of 12 weeks of gestation.[6] However reaching the cornual pedicles becomes difficult when the uterus fills the pelvic cavity. Uterine bisection from cervix to fundus followed by displacement of one half of the uterus above the other half permits such an access to one cornu. When one half of the uterus is removed, the other cornu can be accessed easily. Uterine bisection is the preferred method of accessing cornual pedicles when the conventional technique fails due to uterine enlargement.[6] But if the uterine corpus fills the pelvic cavity, even a half of it cannot be delivered vaginally using the bisection technique, even if one is able to complete the bisection. Complete bisection becomes even more difficult or impossible if the fundus is enlarged cranially, rising much above the level of the cornua. Lash procedure is an alternative, where the uterine wall is cored out by a series of circumferential incisions on the surface of the uterine corpus.[4] However the cranial and outer part of the cored out corpus turns upwards and some part of the cornual pedicle may not get included in the clamp.[7] Hemostasis may get compromised unless additional clamping is done after removal of the corpus. Morcellation after failure of bisection technique can achieve access to the cornual pedicles in most cases. But the procedure is messy. The specimen is in the form of a number of small pieces, so that gross and histopathological processing may become difficult.
In the technique described, the uterine specimen is removed en masse, only its lower portion being bisected. There is no space between the uterus and pelvic walls for reaching the uterine fundus or the cornual structures. Displacement of the corpus to one side and cranially by digital pressure on its cut lateral surface of the other side brings the cornual pedicle nearer the midline and makes it accessible for clamping. The posterior blade of the clamp is passed between two fingers of one hand posteriorly and the corpus and cornual pedicle anteriorly. Thus there is no risk of accidental injury to any abdominal structure like bowel or omentum. After division of the pedicle, a rotation of the uterine corpus is achieved around an anteroposterior axis passing through the opposite cornu. Such rotation does not require any extra space and hence can be achieved. When the large uterine fundus swings down towards the vagina, the corpus gets delivered. It is held by only the other cornual pedicle which is now accessible for clamping and ligating.
There is no risk of extra bleeding as also in case of the other techniques like bisection, Lash procedure and morcellation, because all of them are performed after ligation and division of the uterine vessels.[6] If at all, the bleeding would be somewhat less than with those methods, because the uterine blood supply through the ovarian vessels continues until both cornual pedicles are clamped, cut and ligated in those cases, while in this technique one cornual pedicle is clamped first.
Failure of this technique would necessitate either an abdominal approach or packing the vagina and taking a laparoscopic approach. I did not have to resort to it, but may have to when more number of cases are performed.

Lateral and cranial displacement of the uterine corpus for gaining access to a cornual pedicle, division of that pedicle, and then rotating the uterine corpus around an anteroposterior axis passing through the opposite cornu by making downward traction on the cut lateral surface of the corpus is a useful technique for performing a vaginal hysterectomy when the uterus is large and methods like bisection, Lash procedure or morcellation fail or are not desired.