Abstract
Spontaneous rupture of uterus in a primigravida prior to onset of labor is extremely rare. The uterus needs to be conserved in such cases, if possible. The future obstetric outcome is influenced by quality of the scar  We report hysterographic findings in a case of spontaneous chronic upper segment rupture in 26 year old primigravida with 30 weeks of gestation.
Introduction
Poor healing of a uterine scar may be associated with complications in future pregnancies like scar pregnancy, morbidly adherent placenta, scar dehiscence or rupture.[1]  The healing may be related to the site of the rupture (upper segment versus lower segment), the type of rupture (acute versus chronic), the type of suture material, and/or the suturing technique. A defective scar increases the risk of recurrent rupture. Though the value of a hysterography in assessment of the integrity of uterine lower segment scars is unproved, it may be useful in assessment of upper segment scars in between pregnancies. An unusual case of healing of such an injury is presented.
Case Report
A 30 year old woman, married for 12 years, primigravida presented with 7.5 months of amenorrhea and complaints of watery vaginal discharge and pain in abdomen for 10 days. She had undergone diagnostic hysteroscopy and laparoscopy one year ago for evaluation of infertility. Operative details of the procedure were not available. On examination her vital parameters were normal. She had severe pallor. There was no tenderness, guarding or rigidity on abdominal examination. Uterine fundal height was of 30 weeks of gestation. The fetus was in left acromioanterior oblique lie. Clear amniotic fluid was seen to be draining from the cervix which was uneffaced and closed, Her hemoglobin was 6.2 g/dL, white cell count and C reactive protein levels normal. Ultrasonography showed a viable fetus of 25 weeks of gestation and estimated weight of 700 g in an oblique lie. It had an encephalocoele. Amniotic fluid index was zero. There was no evidence of peritoneal fluid collection. Four units of packed cells were transfused to correct the anemia. White cell count and C reactive protein levels were estimated every day. In view of prolonged rupture of membranes, an oblique lie, and rising levels of C reactive protein, a hysterotomy was performed under spinal anesthesia. A live female fetus weighing 650 g was delivered through a lower segment transverse incision. A small portion of the placenta was delivered out of the uterine incision. A 5 cm diameter defect was noted in the left fundal area of the uterus. The placenta and membranes were seen extruding from the defect. The uterine wall was thinned around the defect, and its edges were fibrotic and not bleeding. The sigmoid, transverse colon and a loop of small bowel were adherent to the posterior wall of the uterus below the defect. The placenta was adherent to the sigmoid colon. The adhesions between the uterus and bowel were released with the assistance of surgeons. A small part of the placenta was left attached to the sigmoid colon because it could not be separated safely. Small serosal tears in the sigmoid colon were repaired. The uterine rent was repaired with a continuous suture of polygalactin no. 1 excluding the decidua. The primary uterine incision was closed similarly. The patient was transfused with 4 units of packed cells and 4 units of fresh frozen plasma. She made an uneventful recovery.
The couple was counseled regarding the future risk of rupture of uterus at scar site and increased risk of maternal and perinatal morbidity and mortality. However the couple was keen on having another pregnancy. So a hysterography was performed after 6 months to assess healing of the scar. It showed multiple pockets of the dye in the myometrium at the site of the scar, and an intravasation of the dye (figure 1). There was no defect in the myometrium at the scar site. 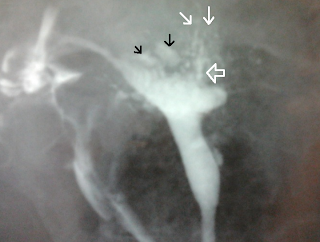 Figure 1. Hysterogram: there are multiple pockets of the dye in the myometrium (solid arrows) and venous intravasation of the dye (hollow arrow).
Discussion
The incidence of uterine rupture increases in a case of scarred uterus depending on the type and site of incision or injury. There is a 32% risk of uterine rupture in a patient with prior upper segment rupture in comparison to 6% risk in a patient with lower segment rupture.[2,3] Rupture of unscarred uterus is associated with higher parity, prolonged labor, obstetric maneuvers (internal podalic version, manual removal of placenta, and instrumental delivery), inherent weakness of myometrium, disorders of collagen matrix (Ehler’s Danlos type IV), uterine anomalies, and placental abruption.[4] A spontaneous rupture of the uterus in a nulliparous woman is unusual, but may be seen if there has been uterine injury or surgery in the past. Hysterography can be used to evaluate integrity of scar. It may show invasion of the myometrium by the scar, pockets of the dye in the myometrium, and intravasation of the dye. The differential diagnoses of this appearance include prominent cervical glands, result of past myomectomy or curettage, uterine diverticula, and focal adenomyosis.[5,6]
In the case presented, the rupture of the uterus might have been due to uterine injury at the time of hysteroscopy and laparoscopy. It had been a slow rupture, so that the placenta got extruded and implanted on the sigmoid colon nearby. That also explained why she did not have features of internal hemorrhage and a hemoperitoneum at laparotomy. Multiple pockets of the dye in the myometrium at the site of the scar indicate ingrowth of the endometium into the myometrium as in adenomyosis, related to deficient endometrium locally. Venous intravasation was due to deficient endometrium. The thinning of the uterine wall locally and the radiographic appearance of the scar indicate a high risk of a rupture of the uterus in a future pregnancy, possibly at an even earlier gestational age.
References