A 65 year old woman presented to Out patient department (OPD) with uterovaginal prolapse for 2 years, reducible initially but irreducible since 3 months and associated with foul smelling discharge for a fortnight. Third degree prolapse with necrotic ulcerated areas and numerous maggots moving in and out of the ulcerated prolapsed mass were seen on local examination. The patient was managed conservatively with removal of maggots with 100% turpentine oil and culture sensitive antibiotics. As the ulcer failed to show any signs of healing & prolapse remained irreducible, ulcer margin was biopsied. Biopsy showed squamous cell carcinoma cervix.

Myiasis is derived from the Greek word ‘Myia’, meaning ‘fly’.[1]  Myiasis is the infestation by dipterous larva (maggots) of various fly species which feed on a living host or necrotic tissue. Cutaneous, nasopharyngeal, ophthalmic myiasis are common. Genital myiasis is a rare condition. We are reporting a rare case of genital myiasis in a woman of irreducible utero-vaginal prolapse with squamous cell carcinoma of cervix.

A 65 years old multiparous, postmenopausal woman came in OPD with complaints of something coming out of vagina for 2 years, reducible initially which became irreducible for 3 months and associated with foul smelling discharge for 15 days. The patient belonged to poor socioeconomic condition, living alone and working as a daily wage worker in a paddy farm. On examination her general condition was fair. She was afebrile, and besides being mildly anemic her general and systemic examinations were within normal limits. There was no local lymphadenopathy. Her abdomen was soft, neither tender nor guarded. On local examination, third degree uterovaginal prolapse was seen. External os could not be easily identified. Prolapsed mass of cervix and vagina of approximately 9 cm x 7 cm was seen out of the introitus as shown in Figure 1. 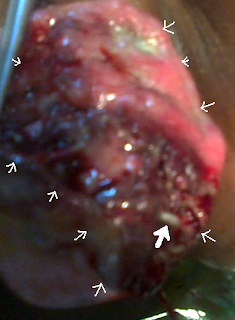 It was irreducible. There were multiple necrotic ulcers over the prolapsed mass associated with foul smelling discharge and numerous maggots were seen moving in and out of this ulcerated tissue. Uterine size could not be ascertained. Bilateral parametrium felt indurated , but rectal mucosa was free on rectal examination. Her haemoglobin was 9 gm/dL,  white blood cell count 10,000/mm3, HIV and VDRL negative, urinalysis normal, renal and liver function tests normal. No growth was seen on urine culture. Ultrasonography of  the abdomen and pelvis was normal. Microbiologic study of the ulcer showed a growth of E. coli and Klebsiella sensitive to levofloxacin. She was treated with levofloxacin orally 400 mg qd for 14 days. The prolapsed mass was cleaned daily with normal saline and maggots were removed after application of 100% turpentine oil to the wound. Deep seated maggots would swarm up after irrigation of the ulcer with turpentine due to irritation and were then washed away with saline. Daily glycerine-MgSO4 dressing was applied over lateral and posterior aspect of the cervix. Glycerine and acriflavin dressing was applied over the ulcerated area. At the end of the 7th day the wound was free of maggots. However, the ulcer showed no signs of healing and neither the prolapse could be reduced. The cervix remained edematous. The margins of the ulcer were thick and indurated. A biopsy was taken from margins of the ulcer. It revealed a squamous cell carcinoma. The parametrium was indurated bilaterally indicative of FIGO stage IIb of carcinoma cervix. The patient was referred to oncology center for radiotherapy. Unfortunately, the patient was then lost for follow up.

‘Myiasis’ was the name given in 1840, by Reverend Frederick William Hope to diseases resulting from dipterous larvae.[2] Though the term myiasis was first used in 1840, such conditions have been recorded even in ancient times.  Chief surgeon, Ambriose Pare, to King Henry III and King Charles IX observed that maggots often infested open wounds.[3]  Myiasis is most commonly reported from subtropical, tropical, and warm temperate regions even though it is globally distributed. Larvae may infect and feed dead, dying, necrotic or living tissue in various sites, like the skin, eyes, ears, stomach, intestinal tract, or genitourinary sites.[4] They may invade open injuries and wounds, lesions or unbroken skin. Some enter the body through body orifices like nose or ears. In present case there was genital infestation.
Genital myiasis in a woman is usually associated with poor general health and hygiene, restricted mobility, and ulcerating lesions.[5] The fetid odor possibly attracts the female flies who lay eggs in existing lesions.[6] Eggs hatch into the larvae. Larvae invade the tissues. As the larvae are photophobic they deeply penetrate the tissue by their sharp oral hooks and anchoring intersegmental spines and feed themselves on living tissues. Pupa emerges within 1-2 days and matures into an adult after 6 days.[7] The larvae secrete a toxin resulting in inflammation and it prevents tissue healing.[8] Myiasis is more likely to be associated with  sexually transmitted diseases and in immunocompromized patients.[9] Urogenital myiasis  can be external or internal based on the anatomical site.[10] External urogenital myiasis is common in women. The practices of not wearing undergarments, cervical carcinoma, or sexually transmitted diseases are conditions which predispose women to external myiasis. In women clitoris, vulva, urethra, vaginal cavity, and uterus have been affected and all reported cases have been associated with uterine prolapse. Internal urogenital myiasis is rare and it occurs when the larvae reach internal genitourinary organs. Burning micturition, loin pain, vaginal bleeding are some of the complaints of these patients. Symptoms subside after the expulsion of maggots.
The above case was an interesting case of external genital myiasis. This woman was from low socioeconomic strata. Her hygiene was poor and she did not wear any undergarment. She would squat to work in the paddy fields dressed in a sari which most likely allowed the adult fly to gain access to the prolapsed cervix; and lay eggs. The hot and humid climate of India facilitated their hatching and cervical ulcer got infested with maggots. Carcinoma of the cervix provided sufficient necrotic debris for the larvae to feed on and multiply. Literature search gave only one article of genital myiasis associated with prolapse and vaginal malignancy.[11]
The treatment is simple and involves usage of antilarval measures (turpentine oil or mixture of turpentine oil and chloroform) followed by the removal of the larvae. Other agents like ether, chloroform, or surgical debridement have been used for removal of the larvae.[12] In the present case we used 100% turpentine oil, local antiseptics and antimicrobial agents along with culture specific antibiotics. Turpentine oil creates an anaerobic environment forcing the maggots to wriggle out to the surface and expel out or they can be washed away.[10] Though our treatment made the wound clean, it was not healing and we suspected malignancy, which was confirmed on biopsy.

Conclusion
We are reporting this case as genital myiasis is rare and it is still rarer when associated with advanced malignancy. Cleaning the external wound with turpentine clears the maggots from the wound, prevents extensive tissue destruction and allows wounds to heal. But when despite being free of maggots the wounds do not heal a possibility of underlying malignancy should be considered and evaluated.