Uterine rupture during pregnancy is an obstetric emergency. It is most commonly associated with a scar on the uterus followed by multiparous patients with inadvertent use of oxytocics or obstructed labor. In primigravidas, upper segment uterine rupture is rare. In our case, the patient had fundal rupture in first pregnancy during labor followed by spontaneous fundal rupture at 29 weeks in second pregnancy.

The uterine rupture during pregnancy is a catastrophic entity resulting in maternal and perinatal morbidity and mortality. In patients with previous lower segment cesarean sections, the risk of uterine rupture is estimated up to 1%.[1,2]
However, uterine rupture at the site of previous iatrogenic perforation which is spontaneously healed or repaired is less reported. We present a case of uterine rupture occurring twice in the same patient, once detected after a term instrumental delivery and second presently in the  third trimester of antenatal period.

A 35 years old woman, G2P1IUFD1, married for 14 years with 29 weeks of gestation presented with pain in abdomen and vaginal bleeding with soakage of one pad. There was history of diagnostic hystero-laparoscopy done 10 years back [no papers available]. The patient conceived with treatment. At term in the first pregnancy at another hospital, the patient had pregnancy induced hypertension (PIH) with intrauterine fetal death (IUFD). Labor was induced with PGE2 gel and she had a term outlet forceps delivery. Immediately following the forceps birth the omentum presented out of the os and vagina. Emergency exploratory laparotomy was done. There was a transverse tear on the fundus, 4 cm in length. The edges were not bleeding and it appeared to be an old rupture. There was a hemoperitoneum of only 100-150 cc. The tear was sutured in 3 layers. Postoperative course was uneventful. In this pregnancy, the patient had regular antenatal checkup at another clinic. On presentation to us the patient’s general condition was fair, vital parameters were stable, and mild pallor was present. On abdominal examination, the uterus was 28 weeks and tonically contracted. Fetal heart sounds were absent. There was an infra-umbilical vertical scar. On vaginal examination, os was closed and bleeding was present. Blood was sent for investigations, grouping and cross matching. Ultrasonography (USG) showed a 27 weeks IUFD with low lying placenta. Clinically a uterine rupture was suspected and patient and relatives were counseled. Consent for exploratory laparotomy with suturing of the uterine rent and subtotal hysterectomy if required was obtained. Emergency exploratory laparotomy was done. A hemoperitoneum of 200 ml with 100 g clots was present. A female fetus of 1.12 kg was lying in the peritoneal cavity. A transverse fundal rupture of 4 cm was noted . The placenta had separated and was in the process of expulsion into the peritoneal cavity. The fetus and placenta were removed. The uterus contracted. There was no active bleeding from the uterine rent. Adhesions between posterior surface of uterus and intestines were seen and they required adhesiolysis. Bilateral tubes and ovaries were normal.  Subtotal hysterectomy was done as the rupture edge was ragged and it was recurrent rupture in the upper segment. 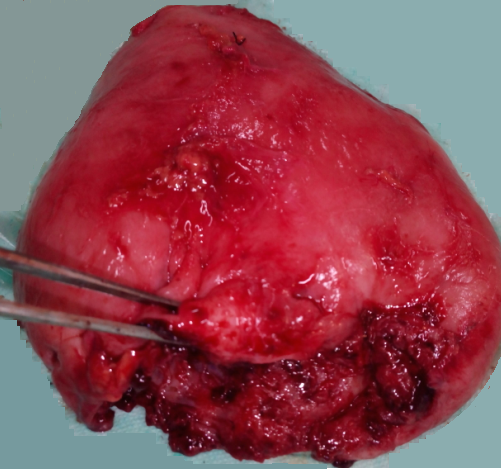 The patient was given 4 units of fresh frozen plasma and four units of blood transfusions. Postoperative course was uneventful. She was discharged on postoperative day 6.

Lower segment uterine scars tend to give way in labor and the upper segment scars during pregnancy. The second common cause is myomectomy scars.[3] Scar of previous uterine perforation which occurs as a complication of minimally invasive procedures such as hysteroscopy, dilatation and curettage and others is not even considered as a minor cause of uterine rupture during pregnancy.[4] The risk of uterine rupture depends on the location of the scar. The general risk for the rupture of an upper segment scar is 4% to 19%.[1] Uterine perforation is one of the most frequent complications of operative hysteroscopy, with an incidence of 0.7-3%. Uterine perforations occur most frequently during operative hysteroscopic procedures - mainly adhesiolysis, followed by myomectomy and septum resection, but can also occur during insertion of the hysteroscope.[5,6] We propose that her uterus must have been injured primarily during the hystero-laparoscopy procedure or with an accompanying dilatation and curettage 10 years ago even though no operative records are available for the same. This site in the upper segment most likely healed inadequately with fibrosis. She managed to carry her first pregnancy to term. The scar probably gave way in the antenatal period rather than during induction of labor resulting in a pre-induction IUFD. This hypothesis is based on the operative notes stating that the rupture edges appeared old and they were not freshly bleeding. The repeat rupture occurred spontaneously at 28 weeks. Literature has documented that upper segment scars rupture in antenatal period remote from labor. Her second pregnancy rupture behaved similarly. These scars rupture in a quiet uterus. The factors that may affect wound healing like method used for myometrial hemostasis and to close the myometrial defect, an actively contracting and retracting upper segment, the extent of local tissue destruction, the presence of infection or hematoma formation, individual healing characteristics may have contributed to poor scar integrity.[7] Due to high probability of repeated rupture of the uterus in future pregnancies a subtotal hysterectomy was done in this patient.