Incisional hernia is an abdominal wall defect that occurs at the site of previous surgical incision following breakdown in the continuity of the fascia closure.[1] Incidence of incision hernia is about 11% in abdominal laparotomies [2-3] and with wound infection incidence goes up to 26%.[4] Gravid uterus though a rare content of the hernia sac predisposes to serious complications like burst abdomen, preterm labor, spontaneous abortion, accidental hemorrhage, intrauterine growth restriction, dysfunctional labor, obstructed labor,uterine rupture and intrauterine fetal death.[5-6]  Initially these hernias are reducible however as pregnancy advances or diagnosis is delayed the gravid uterus is at a risk for incarceration and subsequent strangulation. [7, 8]

A 34-year-old second gravida para-1 (G2P1) presented at 24 weeks of gestation in emergency with omentum protruding through a thin shiny, excoriated and discolored overlying skin on an anterior abdominal wall hernia. She had a previous normal delivery 4 years back. On day 4 of that delivery she developed sub acute intestinal obstruction due to ileo caecal tuberculosis resulting in an ileal stricture. Exploratory laprotomy and ileo-ileal resection anastomosis was done. Her post operative course was uneventful. She completed 9 months anti tubercular chemotherapy under direct observation. Six Months following surgery she noted a swelling in her abdomen that would increase on standing and decreases on lying down. She again consulted the surgeon for the same and was diagnosed to have incisional hernia and was advised to continue conservative management in form of abdominal binder and to undergo elective mesh repair of the hernia after completion of her family. She conceived. Examination revealed a midline vertical infraumbilical scar extending 3-4 cms above umbilicus with a large hernial sac containing a 24-week-size gravid uterus, which was drooping down up to her waist. 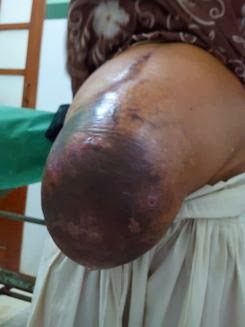 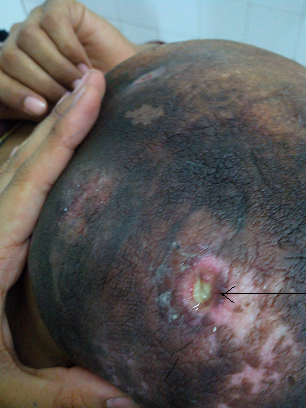 Figure 2 Excoriation of the overlying skin. Arrow indicates the site of the excoriation and the visible omentum 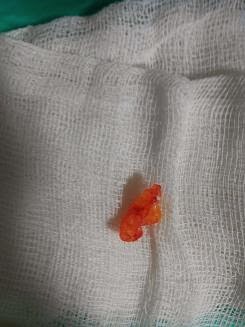 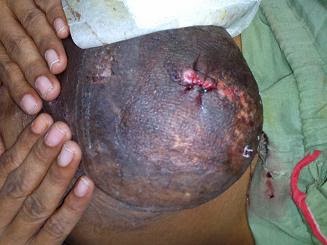 Figure 4 Sutures seen on the skin after surgical repair.

Uterus and the fetal parts were felt superficially. Uterus was reducible. There was no evidence of strangulation. Surgeons evaluated her. Ultrasonography (USG) of the abdomen was done. It showed a midline anterior abdominal wall defect of size 10 cms suggestive of anterior abdominal wall hernia with bowel, omentum and the gravid uterus as its content. All her blood investigations were normal. Surgeons excised the prolapsed part of the omentum and closed the skin defect under local anesthesia. The patient was discharged next post operative day. She was advised to wear the abdominal binder regularly and follow up weekly in the antenatal OPD. Again now at 33 weeks of gestation the skin overlying the hernia underwent necrosis and through a defect of 7 mm the omentum presented at the skin defect (Figure 2). Surgeons repeated the same conservative surgical procedure. She is scheduled for elective cesarean section with herniorraphy (mesh plasty) at 38 weeks of gestation.

The usual contents of the abdominal wall hernia sac are omentum and loops of small intestine. Herniation of gravid uterus through abdominal wall is an uncommon but grave condition. Incarceration of the gravid uterus with or without strangulation along with ulceration and excoriation of the overlying skin and bleeding from the ulcerated area can lead to shock. [7, 8, 9] However, ulceration of overlying skin of the hernia sac without incarceration or strangulation has also been reported. [10] Our case presented similarly as her pregnancy advanced. Diagnosis of the above condition is clinical and it can be confirmed on USG. In cases of doubt of strangulation an MRI can be diagnostic. [10]
Management of incisional hernia in pregnancy in mainly conservative, including manual reduction of hernia and use of abdominal binder during antenatal period and labor. [1, 5, 9, 11] Elective cesarean section is considered to be safest as the integrity of the weak anterior abdominal wall and or the scarred uterus during vaginal birth is uncertain. [11] Hernia repair can be done at the time of cesarean section or can be done at an interval of 6-8 weeks. Post partum elective herniorrhaphy allows an optimal repair as the overstretched abdominal wall skin can be fashioned to correct dimension. Further the repaired abdominal wall is not subjected to mechanical stresses of labor and there is no associated risk of wound disruption and infections.[11] However, incarceration, burst abdomen or strangulation will necessitate an immediate repair even in the antenatal period. The pregnancy then grows to term. [12,13] Elective antenatal hernia repair have been  reported during the 2nd and 3rd trimester of pregnancy with an outcome of normal term vaginal delivery. [7,13]  However such approach is associated with significant risk of anesthesia and surgical intervention during pregnancy. Moreover, the enlarged uterus itself may hinder optimal herniorrhaphy, and further enlargement with advancing gestation may disrupt the hernia repair. [6] In patients with very large defect or in remote areas an alternative, intermediate method of aggressive physiotherapy of abdominal wall muscles along with abdominal binder can be offered.