The incidence of ovarian carcinoma in pregnancy is uncommon. A patient presented at 35 weeks with right sided ovarian mass of 15×13×12 cm and gross ascites. Emergency cesarean section was performed in view of primigravida with breech presentation in labor with right salphingo-oophorectomy with infra-colic omentectomy. Histopathological examination of right ovarian mass was suggestive of borderline serous papillary neoplasm.

Epithelial ovarian cancer during pregnancy is rare. Early detection of ovarian cancer has increased with the use of routine prenatal ultrasonography. Epithelial cancers are asymptomatic other than those symptoms induced mechanically by the size of the tumor. Confusion of symptomatology with the physiologic changes associated with the pregnant state also causes a delay in diagnosis. The majority of ovarian cancers diagnosed during pregnancy are found at an early stage, with maternal prognosis similar to that in the non-pregnant patient.

A 22 years old woman, primigravida with 35 weeks of gestation was referred from a private hospital with right ovarian malignancy and gross ascites. She was registered at that private hospital at two months of pregnancy. Her routine ultrasonography at eight weeks of gestation detected right ovarian mass measuring 9×8×11cm and mild free fluid in the cul de sac.  Both arterial and venous flows were present with decreased resistance index of 0.3 in the right ovary on Doppler study. She had regular antenatal visits and her only complaint was increased distension of abdomen from the third month of her pregnancy. Repeat ultrasonography was performed at 20 weeks of gestation which was showed moderate ascites and a 9.8×6.8 cm sized isoechoic to hypoechoic lesion in right adnexa with central cystic degeneration. The right ovary was not visualised separately from the mass. Her CA 125 was 454.9 U/ml.  Cytological examination of her peritoneal fluid showed lymphocytes, neutrophils and plenty of reactive mesothelial cells with no malignant cells. Serial ultrasonography of the abdomen showed increasing ascites while size of ovarian mass remained the same. There was a slight increase in Ca 125 level to 469 U/ml.
She was referred to us at 35 weeks of gestation with chief complaints of pain in abdomen with right ovarian mass with gross ascites for further management. On examination her vital parameters were stable. Systemic examination was normal. Abdominal examination revealed gross ascites due to which fundal height, presenting part and fetal heart sound were not appreciated. On vaginal examination, the cervix was 2 cm dilated and 50% effaced, the presenting part was breech,  fetal membranes were intact, and show was seen. Fetal heart sounds were demonstrated on ultrasonography. An emergency lower segment caesarean was done for primigravida with breech presentation in early labor. A male fetus weight 1.5 kg was delivered with Apgar score of 9/10. Around 8 to 10 L of pale yellow ascitic fluid was drained. There was a right sided ovarian mass measuring about 15×13×12 cm in size, which was firm in consistency. Capsule of the ovarian mass was breached and externally there was a fungating growth of about 5 cm above the surface of ovary. The fungating growth was greyish brown in color, soft to firm in consistency, and with few yellowish white areas. There was also an intrauterine septum with sub mucosal fibroid of around 5 cm on the posterior wall of the uterus. In view of above intraoperative findings right salphingo-oophorectomy with infra-colic omentectomy was done. Specimen was sent for histopathology and peritoneal fluid was sent for cytology. Her post operative course was uneventful. On day 2 postoperative her Ca 125 was 226 U/ml and other tumor markers were within normal range .There were no malignant cell detected on cytology of peritoneal fluid. Histopathological examination of the right ovarian mass was suggestive of borderline serous papillary neoplasm and there was no definite evidence of malignancy in the omentum. This diagnosis was confirmed at an  oncology center. According to International Federation of Gynaecology and obstetrics (FIGO) classification, the patient belonged to category stage1c. The patient was advised only follow up visits. 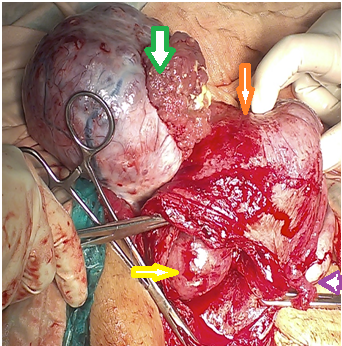 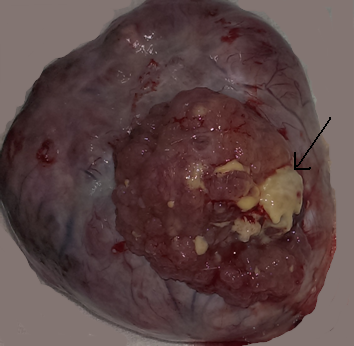 Figure 2: Fungating growth on the surface of the ovarian mass (arrow). Epithelial cancers are most common ovarian malignancies of which 75% are of serous type. Ovarian cancers are associated with low parity and infertility. The incidence of ovarian tumor is 1/556 during pregnancy.[1] Approximately 3% of women diagnosed with a malignancy of the reproductive tract will have a coexisting pregnancy.[2]  In first two decades of life, almost 75% of ovarian tumors are of germ cell origin. Dysgerminoma is the most common ovarian germ cell tumor that coexists with pregnancy, and constitutes 25-35% of all ovarian cancers.[3] Borderline ovarian tumors are tumors of low malignant potential which are confined to the ovary, encountered most frequently between the ages of 30-50 years and are associated with a good prognosis. The histological types of ovarian cancers during pregnancy are similar to those for non pregnant women in the corresponding reproductive-age group as reported in several studies.[4]
Ovarian cancers are usually asymptomatic. The vague digestive disturbances such as flatulence, eructation and abdominal discomfort may precede other symptoms by many months which have led to the well accepted statement "How many early ovarian carcinomas have been nurtured in the sea of soda-bicarbonates". Diagnostic delay is also due to confusion of symptomatology with the physiologic changes associated with the pregnant state. An ultrasonography is routinely performed for evaluating fetal status in pregnant women, which also helps in the early detection of an incidental ovarian tumor. With increased use of routine prenatal ultrasonography, finding of an adnexal mass in pregnancy is also increasing. In malignant tumors the resistance index is usually low (< 0.4) and there is high peak velocity on Doppler studies. CT and MRI can be used to evaluate the tumor and the extent of its spread. CA-125 higher than 35 U/ml is found in over 80% of non mucinous epithelial ovarian cancers.
During pregnancy, surgical management of an adnexal mass creates a dilemma to gynecologists. In case of an adnexal mass greater than 6 cm in diameter, with a complex structure, or ascites, surgical management is critical for obtaining a final histological diagnosis and ruling out malignancy.[5]
In stage 1 low grade, low risk abdominal hysterectomy with bilateral salphingo-oophorectomy is appropriate. In patients who desire to preserve fertility, uterus and contralateral ovary can be preserved in women with stage 1A, grade 1 to 2 disease. Careful monitoring of such patients is required, with routine periodic pelvic examination and serum CA-125 levels.