Vitiligo is characterized by patchy depigmentation of the skin due to selective destruction of melanocytes. The exact etiology is debatable. The most likely cause is an autoimmune disorder.  Women are predisposed to autoimmune disorders and these may be associated with adverse pregnancy outcomes, like recurrent pregnancy wastage, intrauterine growth restriction (IUGR), and pre-eclampsia.[1] The outcome of vitiligo in a gravid woman is undescribed in literature.  We herein report a rare case of a third gravida woman who developed hypopigmented patches during pregnancy.

Vitiligo is an acquired pigmentary disorder of unknown etiology. Distinctive clinical feature is the development of white macules on the skin. It is related to the selective loss of melanocytes. Incidence ranges from less than 0.1% to greater than 8% worldwide. It is around 1% in the and in and 0.46% in India.[2,3,4,5]. The exact etiology of Vitiligo is unknown, but is believed to be have an autoimmune component.[6] As with all autoimmune diseases, course of the disease is unpredictable during pregnancy and it has been associated with bad obstetrical outcome and recurrent abortions. Because of the rarity of this disease and its association with pregnancy, there have been no controlled trials on the management of vitiligo in pregnancy. Herein we report a case of third gravida woman with previous two abortions, who developed hypopigmented patches on face, neck and forearm.

A 24 year old third gravida with previous 2 abortions at 20 weeks of gestation came to outpatient department of our tertiary institute with complaints of hypopigmented patches on face, neck and forearm for 1 week. It started increasing gradually and was not associated with any itching. On examination, vital parameters were stable. Systemic examination was normal. On abdominal examination uterus was 20 weeks in size, external ballottement was present. Irregular hypopigmented patches (5x7 cm) on neck and (2x2 cm) on forearm were seen as seen in Figure 1 and 2 respectively. 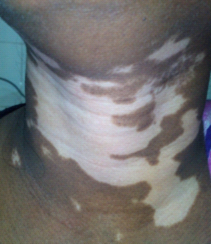 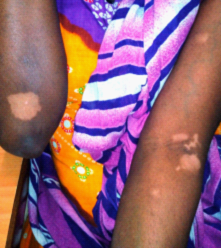 The patient was thoroughly evaluated. Her thyroid profile showed increased thyroid stimulating hormone (TSH 8.66) for which Thyroxine supplement 50 microgram on Monday to Friday and 100 microgram on weekend was started. She had no anti cardiolipin, lupus anticoagulant, and anti microsomal antibodies. Dermatological reference was done. She was diagnosed as a case of vitiligo. She was given desonite cream 0.05% for application once a day for one week. Her hypopigmented patches remained static on the forearm and neck throughout the remaining pregnancy. She delivered a normal healthy baby of 3.2 kg at term. In the post partum period as seen in Figure 3 and 4 the patient had a subjective feeling that patches and their whiteness had decreased both on her forearm and on her neck. 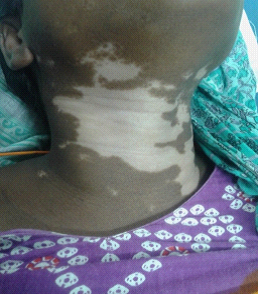 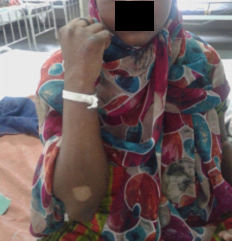 Vitiligo is an ancient disease and has a global prevalence.Multiple references in literature have described this condition and different aspects of its causes and therapy. The cause of vitiligo is unknown. The autoimmune hypothesis is the best supported causative hypothesis.[5]   There is evidence that emotional stress can precipitate this disease. It is difficult to precisely identify the triggering factors for vitiligo. Emotional stress, pregnancy, drug intake, trauma/injury are some of the triggers leading to destruction of the melanocytes.
In pregnancy vitiligo poses a threefold problem; first is by virtue of its autoimmune pathogenesis it is associated with bad obstetrical outcome and recurrent abortions. Second is the depigmentation itself and third is the emotional trauma that the patients suffer from. Besides the clinician is in a dilemma as the outcome of vitiligo in pregnancy is unpredictable and not well studied.
Our patient had a good pregnancy outcome and vitiligo did not cause any adverse effects on the mother or the fetus.  Most authors also have reported that vitiligo is not associated with adverse pregnancy and birth outcome. [1,6] They also observed no change during or immediately following pregnancy, but extension of the vitiligo immediately after delivery was noted by 31 per cent.[1,6] In our patient objective improvement post delivery was negligible but the patient was very positive that some spots had disappeared and a few of them were less white. An increase in vitiligo during pregnancy was claimed by 7 per cent and a decrease by 3 per cent.[1,6]  The aim of this article is to highlight this rare association that has an unpredictable course, nevertheless the outcome can be good in some cases.