Polyembolokoilamania is inserting a foreign body into one body orifice or more.[1] A case of self-insertion of an iron rod into the vagina which passed through the urinary bladder into exptraperitoneal pelvic and abdominal tissues is presented.

Polyembolokoilamania is inserting a foreign body into one body orifice or more.[1] The vagina is a not uncommon site of insertion of foreign bodies. These may be self inserted, as for medical treatment, sexual purposes or to achieve a criminal abortion; or due to psychiatric reasons. These may be inserted by others with a view to harm the women concerned, as a part of sexual or physical assault or to achieve a criminal abortion. Clinical presentation of a foreign body in the vagina can be varied. It can be catastrophic if the foreign body penetrates into the peritoneal cavity. In such cases, the patient needs treatment by joint effort of a gynaecologist, surgeon, and psychiatrist. A case of self-insertion of an iron rod into the vagina which passed through the urinary bladder into exptraperitoneal pelvic and abdominal tissues is presented.

A 31 years old woman, para 2 living 2 presented with a complaint of involuntary passage of urine vaginally for 2 days. She gave a history of passing a pointed iron rod into her own vagina prior to the beginning of urinary incontinence. She had had mild vaginal bleeding after the insertion, which had stopped without any treatment. The patient had been deserted by her husband. She knew she was HIV positive. She had suicidal tendencies and had inserted the rod thinking it would kill her. There was no history suggestive of an injury to intraperitoneal structures. On examination, her general condition was fair and vital parameters were normal. Systemic examination revealed no abnormality. Her abdomen was soft, with no tenderness, guarding, rigidity, or free fluid. Peristaltic .sounds were normal Speculum examination showed a normal cervix, and a puncture mark in the anterior vaginal fornix a little to the right of the midline. Urine was seen to be leaking from that puncture. The iron rod was not visible.  Bimanual pelvic examination showed mild tenderness in the anterior fornix, and normal sized uterus in retroverted position. No foreign body was palpable. A plain radiograph of the abdomen and pelvis showed a long, rod-shaped metallic foreign body with a pointed end in the pelvis and lower abdomen on the right side, the pointed end pointing upwards (figure 1). There was no free gas under the diaphragm, and no other abnormality. A Foley’s catheter was passed into the urinary bladder and continuous drainage of the bladder was maintained. Hemogram of the patient showed mild anemia and normal white blood cell and platelet counts. Plasma sugar level, renal and liver function test results were normal. Abdominopelvic ultrasonography showed the rod-shaped foreign body to be within retroperitoneal soft tissues A cystoscopy was performed. It showed a 2 mm diameter puncture mark in the lower anterior wall of the bladder and another in the anterior wall of the bladder on the right side of the midline. There was no foreign body in the urinary bladder. An exploratory laparotomy was performed. The foreign body was removed from retroperitoneal tissues, its tip being near the left psoas major muscle. It was a 10 cm long iron nail with a pointed end but without a head. The patient made an uneventful recovery. She was put on antiretroviral therapy.  After continuous bladder drainage for 14 days, the urinary catheter was removed. She did not have any urinary incontinence subsequently. Psychiatric evaluation of the patient showed suicidal tendency. She was treated with psychoactive drugs. Counselling was done about possible harm from insertion of foreign bodies into the vagina. The patient agreed not to indulge in such behavior again. 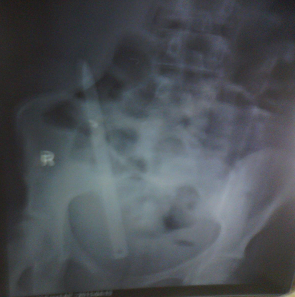 Figure 1. Plain radiograph of the abdomen and pelvis, showing the foreign body.

Polyembolokoilamania is inserting a foreign body into one body orifice or more.[1] Insertion of a foreign body into the vagina by self might be seen in cases of pessaries prescribed for prolapse of the uterus, tampons for containing menstrual blood, or hormone releasing rings for contraception.[2] Foreign bodies may be inserted by women during masturbation, and a part of the foreign body may accidentally break inside the vagina.[2] A child may insert a small foreign body into the vagina during play.[3] But that is not very common. In places where medical termination of a pregnancy is not legal, vaginal insertion of sticks, catheters, or plant twigs may be done for achieving a criminal abortion.[4,5] It may be done for smuggling of illicit drug.[6] It may be a manifestation of a psychiatric condition, such as malingering, factitious illness, self-injury, or psychosis.[7] Insertion of foreign bodies like rods, nails, or knives is usually done as sexual or physical violence against the woman by another person. There are reports of such insertions for torture.[8]
This patient inserted a long nail into the vagina probably under extreme stress of her medical condition, desertion by the husband, and poverty. The insertion must have been quite forceful, since it passed through the bladder twice and into soft tissues in front of the urinary bladder. It was fortunate that the nail did not pass into the peritoneal cavity and injure bowel. It was also fortunate that the bladder injuries healed with prolonged catheterization, and a urinary fistula did not develop.
The presenting complaints can be vaginal discharge, foul odor, bleeding, and pain. There are features of local with/without systemic infection. If the peritoneal cavity has not been entered by a sharp and pointed object, its removal is usually sufficient. Local and systemic antibiotics are required too. If there is penetration of the bladder, rectum and/or peritoneal cavity, appropriate treatment by a specialist is warranted. A criminal abortion with an abortion stick or catheter may present with severe uterine sepsis, peritonitis and septicaemia. Besides broad spectrum antibiotics, a total abdominal hysterectomy and peritoneal drainage is often required. Septic shock needs to be managed appropriately. Based on the underlying cause, the patient often needs counselling and psychiatric care.[9]