Mullerian anomalies are rare and usually asymptomatic. Patients with unicornuate uterus commonly present with repeated second trimester spontaneous abortions, preterm deliveries or malpresentations; rarely as ectopic pregnancy. Though uncommon, they can also present with gynecological conditions such as endometriosis or infertility; adenomysosis is extremely rare. We report a case of unicornuate uterus with endometriosis and adenomyosis in rudimentary non-communicating horn, who presented with chronic pain in abdomen and secondary infertility.

A 29 year old para 1, living 0, abortion 2, case of secondary infertility, presented with a history of pain in lower abdomen since 3 years, aggravated since last one year. Pain was continuous and occasionally associated with vomiting.  Her menstrual cycles were regular, but she had severe congestive as well as spasmodic dysmenorrhea. There were no urinary complaints. She had two spontaneous first trimester abortions followed by a preterm birth which resulted in neonatal death.
On examination, her vital parameters were normal. On abdominal examination, a firm mass corresponding to 16 to 18 weeks’ size uterus was palpable, arising from pelvis in the midline. It was nontender, with restricted mobility. On speculum examination, cervix was pulled high up. Findings were confirmed on vaginal examination; no adnexal mass was palpable. Clinical impression was fibroid uterus which was consistent with a magnetic resonance imaging (MRI) report done elsewhere one year ago; this showed a bulky uterus with posterior fundal intramural 8.1 x 7.5 cm fibroid and another fundal fibroid of 4.3 x 3.8 cm, with splaying of endometrium at fundus, and absence of the right kidney. 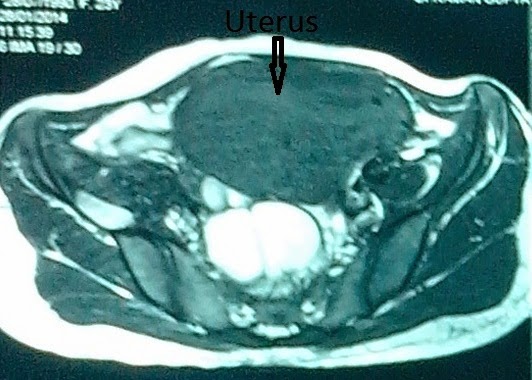 Ultrasonography (USG) was suggestive of an enlarged bicornuate or septate uterus with multiple fibroids, largest being 7.3 x 4.3 cm on posterior wall, with a 6.5 x 3.3 cm endometriotic cyst in right ovary. Hysterosalpingogram showed a unicornuate uterus with patent left fallopian tube. Other routine investigations and husband’s semen analysis were normal.
On exploratory laparotomy, a large broad uterus of 14 weeks’ size with restricted mobility was seen. Left fallopian tube was normal; left ovary was polycystic. Right ovary had a large chocolate cyst (approximately 6 x 5 cm), and was adherent to both the posterior surface of uterus and right lateral pelvic wall. Right sided round ligament was not identified due to adhesions. Right tube was under-developed, distorted and adherent to ovary. Urinary bladder was advanced and small bowel was adherent to right ovary and posterior surface of uterus. After adhesiolysis and dissection of the bladder peritoneum, the uterus and right chocolate cyst were eventrated, at which time the cyst ruptured; cystectomy was difficult due to adhesions with right pelvic wall, hence cyst wall was partially removed and the base was fulgurated. Cervix was felt on the left side at the base of the uterus. 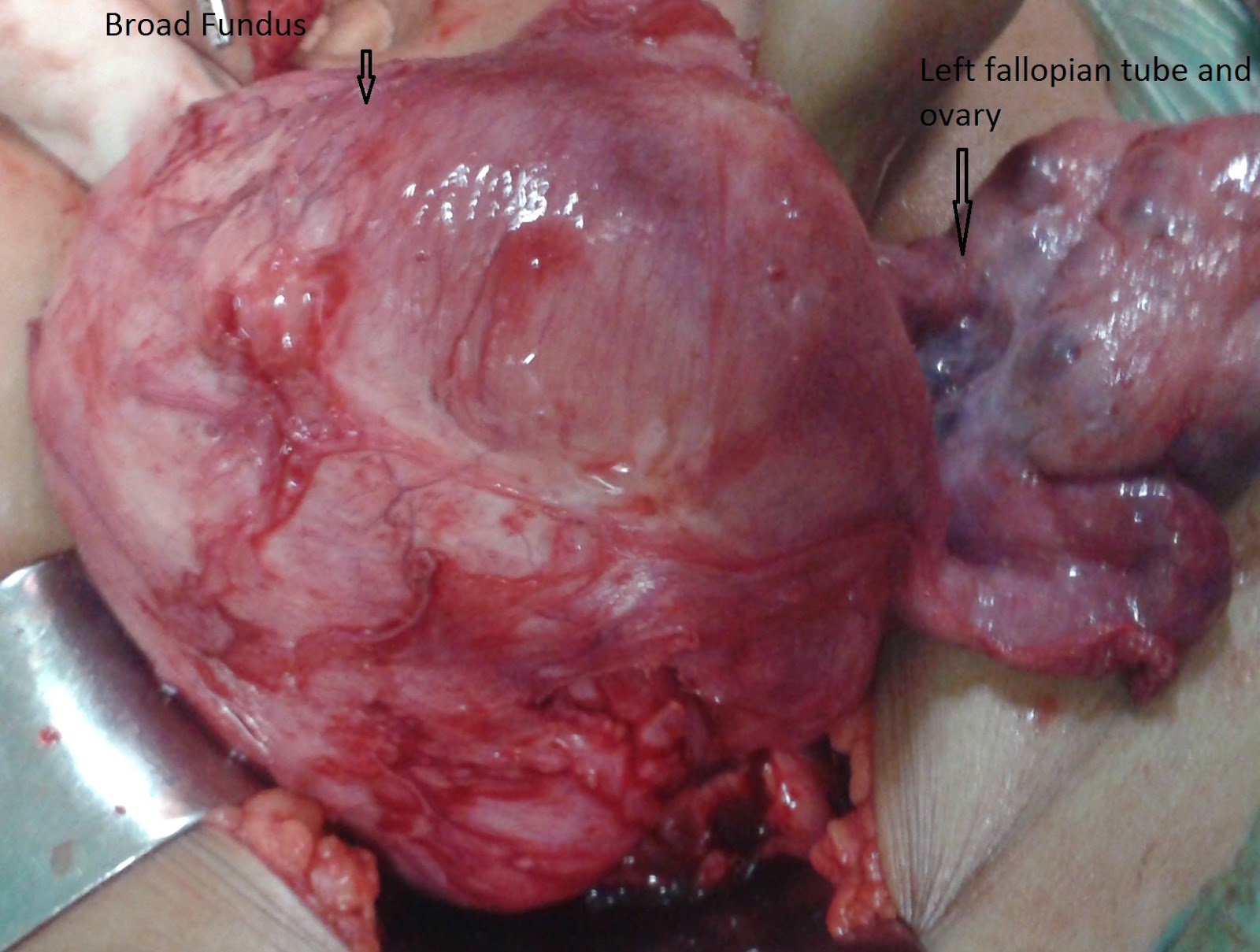 The fibroid described on USG was not clearly defined; however on palpation, a fibroid of size 6 x 4 cm was felt over the fundus on the right side. Primary anterior vertical incision was taken over this area and deepened but no identifiable plane within the myometrium was found; rather the tissues were adenomyotic. A decision for wedge resection was taken: on deepening the incision, a small non-communicating endometrial cavity was seen, which helped us to correctly identify the anomaly and define the plane between the right non-communicating horn and the normally functioning left unicornuate uterus. This adenomyoma ended abruptly at the level of the isthmus of the left horn. The adenomyotic horn was approximately one and a half times the size of the left horn. 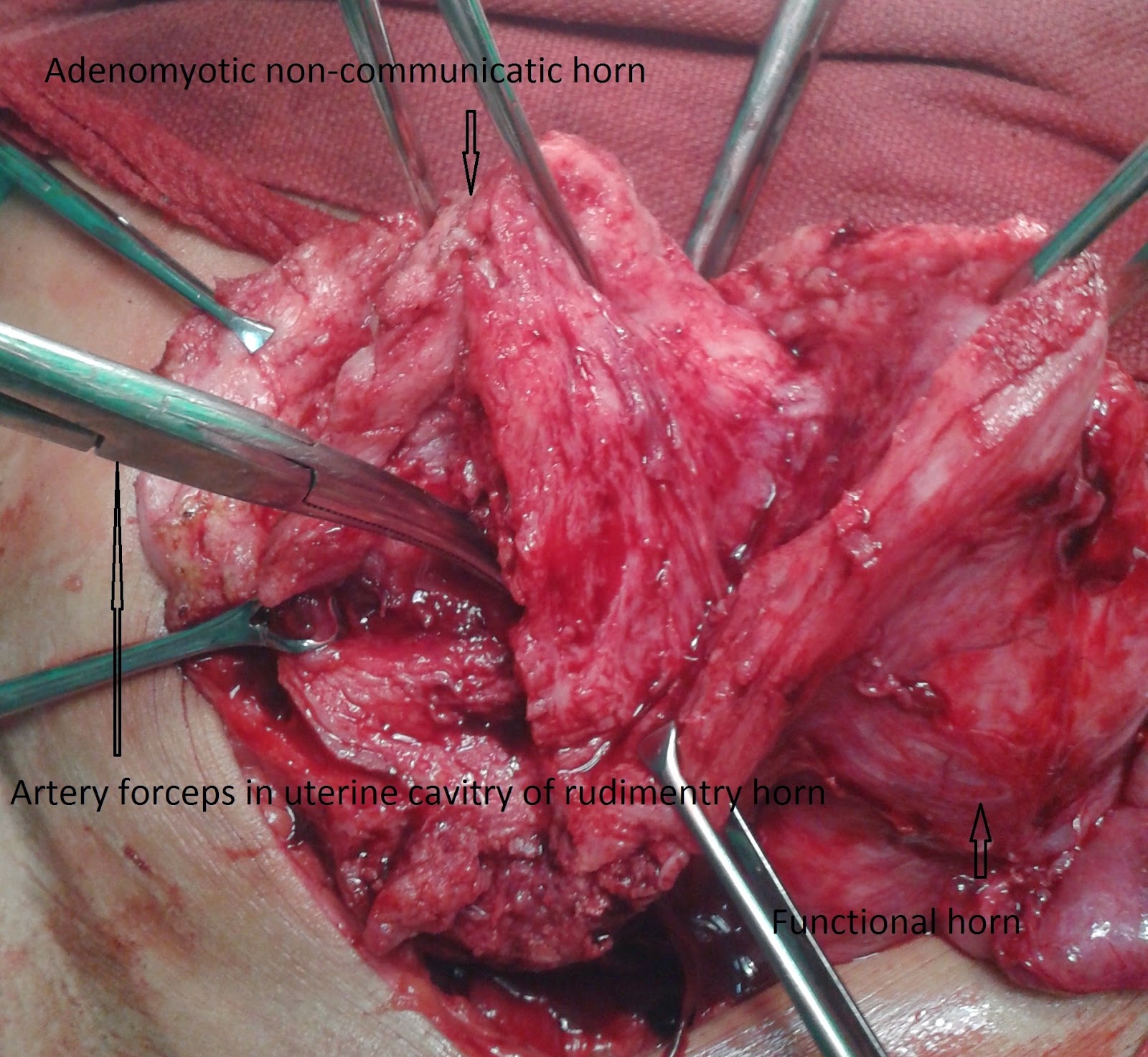 The adenomyotic horn was removed completely after dividing the right cornual structures and ligating the right uterine artery; care was taken to preserve the left horn. Haemostatic sutures were taken with number 1 polyglactin, dead space was obliterated, and redundant serosa was excised. Ultimate serosal suture line was situated along the right lateral margin of the normal left horn, and was closed with number 2-0 polyglactin.
Post operatively the patient recovered uneventfully, had one normal cycle and relief from her dysmenorrhea and chronic pain. She received three doses of depot GnRh analogue (injection Leuprolide acetate 3.75 mg intramuscularly monthly for 3 doses). Histopathology report confirmed myometrial tissue with features of adenomyosis and endometrium within.

American Fertility Society has classified unicornuate uterus as Class II, which is further subdivided into 4 types:
A.       Communicating- where one duct is well developed, other is partially developed and is in communication with main duct.
B.       Non-communicating, where partially developed horn is not in communication with main uterine cavity (with cavity/without cavity), occurs in about 22% of unicornuate uterus. No horn (isolated unicornuate uterus) is the commonest type of unicornuate uterus (33%)
C.       No cavity.
D.       No horn.
As per ESHRE/ ESGE consensus in 2013 unicornuate uterus is categorized as U4 and subdivided in two types- type a with rudimentary cavity (communication or not horn) and type b. without rudimentary cavity (horn without cavity or no horn).[3]
Patients with type II B in AFS classification have functional endometrium, hence are likely to have endometriosis due to retrograde menstruation. The non-communicating horn may be fused with the main horn with flimsy adhesions or with thick bands.[4] In our patient it was a thick band which was further fused with the main horn due to endometriosis, giving appearance of broad fundus; reported as bicornuate or septate uterus on USG. However the exact incidence of adenomyosis in this anomaly is difficult to estimate as most of the literature available is in the form of case reports of only endometriosis.[5,6] Early diagnosis and excision of the horn along with ipsilateral salpingectomy is recommended to prevent further progression of disease as well as serious complications such as ectopic pregnancy.[4]

Though endometriosis has been reported, adenomyosis in rudimentary horn is extremely rare. Early diagnosis and treatment with excision of non-communicating horn with ipsilateral salpingectomy is required.