Vaginal hysterectomy is more difficult to perform than an abdominal hysterectomy, even if there are no complicating factors like uterine enlargement or distortion. The surgeon has to be well trained in vaginal surgery, or there can be serious complications during the performance of the operation. A fear of injuring the bladder can lead to dissection in a wrong direction. Dissection into the broad ligament lateral to the uterus is an error that has not been reported so far in world literature. Such a case is presented here, along with discussion on its prevention and management.

The space available for operating is much less during a vaginal hysterectomy as compared to an abdominal hysterectomy.[1] The anatomy is also difficult to understand, as conventional teaching of human pelvic anatomy is through cadaveric dissection done by the abdominal route. Without adequate training and clinical experience, the operating surgeon can experience difficulty in finding correct tissue planes and performing the correct steps.[1] Finding the uterovesical fold of peritoneum  and opening it are steps which are felt to be quite challenging by many untrained surgeons, out of fear of injuring the bladder. The usual error is passing too deep into the cervix or too superficially into the bladder. The case presented here is the first case in the world literature, in which the dissection was done on one side and the broad ligament was opened instead of the uterovesical peritoneal fold.

The patient was a 60 year old woman, third para, postmenopausal for fifteen years. She had a third degree uterine prolapse, moderate cystocele, moderate rectocele, lax perineum, and an atrophic uterus. Vaginal hysterectomy, anterior colporrhaphy, vault suspension, and posterior colpoperineorrhaphy were being done under spinal anesthesia. The operating surgeon was a junior consultant. The anterior vagina was cut transversely just above the portio vaginalis. The vaginal edges were held up with two Allis’ forceps. Sharp and blunt dissection was done to separate the urinary bladder from the front of the supravaginal cervix. Landon’s retractor was used to retract the urinary bladder during the dissection. Some bleeding was encountered, but it was not alarming. The uterovesical fold of peritoneum could not be identified. I was called for help at that stage.

The anterior surface of the supravaginal cervix was found to be irregularly dissected, but not bleeding significantly. The anterior and posterior leaves of the left broad ligament were torn, but the uterine artery and vein were not injured (figure 1). The ureter was not seen in the vicinity of the opening. The location of the otherwise unidentifiable uterus was demonstrated by passing a uterine sound into the uterocervical canal and palpating over it from the outside. 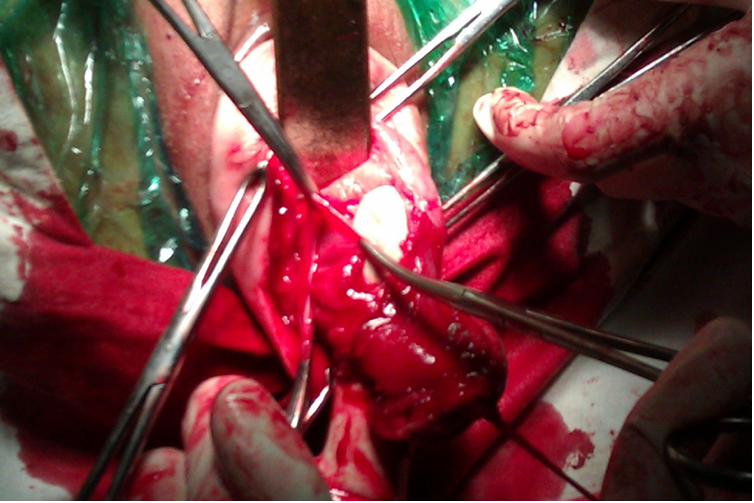 Figure 1. The cut edges of the anterior vagina are held with two Allis’ forceps (black arrows). The medial edge of the opening in the left broad ligament is held with two hemostats (blue arrows). A gloved finger (green arrow) is seen through the window in the left broad ligament, passed from behind the uterus and the ligament. The uterus (U) is on the right side of the opening. The cervix is seen below (C).

The posterior peritoneal pouch was opened first by the conventional method. An index finger was passed behind the uterus and was brought forward over the fundus of the uterus. The uterovesical fold was identified over the finger passed into it from above. It was held with two hemostats and cut open. Subsequent hysterectomy was done by the conventional method, followed by anterior colporrhaphy, vault suspension, and posterior colpoperineorrhaphy. An excretory urography done postoperatively did not reveal any injury to the left ureter. The patient made an uneventful recovery.

Visualization of the pelvic structures clearly prior to making any cuts or performing any dissection of tissues is possible while performing an abdominal hysterectomy. The uterovesical fold is clearly identifiable unless the anatomy has been distorted by pelvic adhesions or tumors. It is easily confirmed that it is indeed the uterovesical fold by its looseness over the supravaginal cervix and isthmus. Then it is cut with scissors. The situation is quite different in a vaginal hysterectomy.[1] After cutting the anterior vagina near the portio vaginalis, the pubovesicocevical fascia has to be dissected in the correct plane that can be identified only with experience, and then the peritoneal fold can be reached.[2,3,4,5,6,7] The uterus is usually identifiable by its bulk. But in case of a postmenopausal woman with uterine atrophy, the uterus is very small in size and thin anteroposteriorly. It may not be easily identifiable. That adds to the difficulty of identifying the uterovesical fold. In order to avoid an injury to the urinary bladder, the surgeon may try to catch any thin fold of tissue and cut it. In the case described, the broad ligament peritoneum lateral to the uterus was caught and dissected believing it to be the uterovesical fold. Passage of a sound into the uterocervical canal helped identify the position of the uterus. The method of opening the posterior peritoneal pouch and passing a finger from there to the uterovesical fold is shown in figure 2. 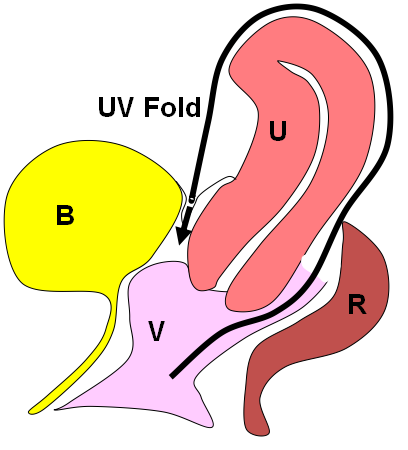 Opening the broad ligament prior to clamping and dividing the uterosacral ligaments is associated with the risk of injury to the ureter. That is so because the ureters are related to the upper surface of the uterosacral ligaments and when the ligaments are divided, the ureters fall away and are less likely to get injured during performance of the remaining steps of the hysterectomy.[3] Opening the broad ligament in this manner is also associated with the risk of hemorrhage from injury to the uterine vessels. A blind attempt at stopping this bleeding by application of hemostats and ligatures or electrocautery may further increase the risk of ureteric injury.

Blind dissection to open the uterovesical fold of peritoneum without first identifying it is risky. If the broad ligament gets opened during such a procedure, there is risk of injury to the ureter and the uterine vessels.