Hazardous Outcome of a Wrong Incision in Shirodkar’s Sling Surgery

A 29 year old woman presented in a moribund condition with hemoperitoneum following Shirodkar’s Sling surgery done through a Pfannensteil incision and a postoperative exploratory laparotomy. She had been explored at the primary hospital of the surgery and was referred in view of frank blood draining from the intraperitoneal drain. Re-exploration was done and intra-operatively the right inferior epigastric artery was found to be injured. She developed sepsis and was revived after intensive treatment for a month. This case highlights why the judgment of incisions is crucial for the outcome of the surgery and that cosmetic outcomes should never receive priority over safety.

Pfannensteil incision is now the preferred route of access for pelvic surgeries.[1] But before over-enthusiastic application of this incision, one should weigh the risks and benefits. Although the merits of the Pfannensteil incision are many, there are also several grave limitations like risk of vascular injury, increased blood loss and the inability to extend the incision if the need so arises, thereby restricting the surgical field.[1,2] Hence, it is imperative that instead of universal application of this technique for every pelvic surgery, one should make a choice specific to each case.

A 29 year old patient presented to the emergency room, transferred from a secondary care hospital, on day 2 of an exploratory laparotomy done in view of a hemoperitoneum following Shirodkar’s Sling surgery for uterovaginal prolapse. Patient was operated through a Pfannensteil incision. On day 5 of Shirodkar’s Sling surgery the patient had high grade fever and complained of acute pain in abdomen. Ultrasonography showed hemoperitoneum for which the patient was explored through the initial Pfannensteil incision in the primary hospital. Intraoperatively there was a 150 ml hematoma on the rectus sheath, clots were present over the left Psoas major muscle and 1000 ml hemoperitoneum was drained out. The two tape fixation sites of sling surgery were healthy and there was no active bleeding. Two units of whole blood were transfused. An intraperitoneal drain was kept in situ. In view of her worsening condition, she was transferred to our center.
On arrival to our tertiary care center, the patient’s general condition was poor, vital parameters were unstable with a pulse of 130/min and BP of 90/60 mm Hg. On abdominal examination there was slight tenderness in the lower abdomen. The intraperitoneal drain had drained 1520 ml of frank blood in 24 hours. Her Hb was 4.6 g/dl, white blood cell count 25,000/cmm and a platelet count of 14,000/cmm. Coagulation profile was within normal limits. Broad spectrum antibiotics were started in view of clinical picture of sepsis and blood and blood products replaced. Computerized tomography (CT) of the abdomen and pelvis was done which showed a moderate hemoperitoneum and the drain was seen to be abutting the right inferior epigastric artery. In view of increasing pain in abdomen and CT findings, a decision of re-exploration was taken. The drain was removed to prepare the abdomen for the re-exploration. Re- exploration was started by opening of sutures of the Pfannensteil incision and a vertical midline extension was required as the access to the abdomen was restricted. Intra-operatively there was hemoperitoneum of 1500 ml and a branch of the right inferior epigastric artery was found to be bleeding. Hemostasis was achieved. No other bleeding sites in the retroperitoneum, or in the peritoneal cavity or in the abdominal wall were found. Two drains were placed- one intraperitoneal and one between the rectus sheath and the muscle. In total 12 whole bloods, 18 platelets and 4 units of Fresh frozen plasma were transfused to the patient peri-operatively and in the immediate postoperative period.  Higher antibiotic (parenteral Meropenem) was started and the patient was shifted to an intensive care unit for a brief period. Complete blood count and coagulation profile were repeated periodically which showed serial gradual improvement. The patient recovered but developed acute post traumatic stress disorder and had to be started on anxiolytics.

The Pfannensteil incision was first described by the German gynecologist in 1900.[3] Since then this technique has been widely used by gynecologists and urologists for pelvic surgeries.[1] This mode of incision is now recommended as it is considered more physiological and many merits are attributed to it, which include reduced postoperative pain, better healing, good cosmetic results and reduced risk of incisional hernia formation.[4, 5, 6] However, it is advised that in cases where the extent of the surgery cannot be predicted, it is always better to opt for the midline vertical incision since it has universal application.[1, 6] Also, the vertical midline incision can be extended if required, allows access to the retroperitoneum besides the entire pelvis and abdominal cavity, and has reduced blood loss and reduced nerve injury.[1] A Pfannensteil incision on the other hand is a restricted incision and is known to cause vascular injuries; the most common being that of the inferior epigastric arteries, as was the case in this patient.[1, 2] Shirodkar’s sling surgery is a posterior compartment conservative surgery for uterovaginal descent which involves the creation of artificial uterosacral ligaments by means of polyester tape or fascia lata and fixing it to the anterior longitudinal ligament over the sacral promontory. In this procedure the tape or fascia lata is hitched to the psoas major muscle on the left side by help of a loop so as to prevent  constriction of the sigmoid colon. This procedure requires extensive dissection of the retroperitoneum and thereby holds risk of injury to the great vessels, left ureter and the vessels of the mesocolon. Hence, the vertical midline incision was recommended by Dr Shirodkar in his monogram as it provided adequate exposure to the retroperitoneum as well as the pelvis.[7]
In the present case, the source of the initial bleeding could either have been from the psoas hitch or the inferior epigastric artery which is a known complication of the Pfannensteil incision or from both the sites. Inadequate length of the Pfannensteil incision may make the exposure to the Psoas major muscle difficult and injury to a vessel or the genitofemoral nerve coursing on it can be injured. It is also a possibility that the initial bleeding was only from the Psoas hitch which was controlled during the first exploration. As the first exploration was done through the initial Pfannensteil incision, the epigastric artery could have been injured in an attempt to extend the incision for better exposure. The insertion of the drain could have caused the injury to the epigastric artery as the exit of the drain was very close to the inferior epigastric artery on the right side. The drain should have been placed more laterally. This epigastric artery injury was either overlooked during the 1st exploration or it occurred during this exploration. 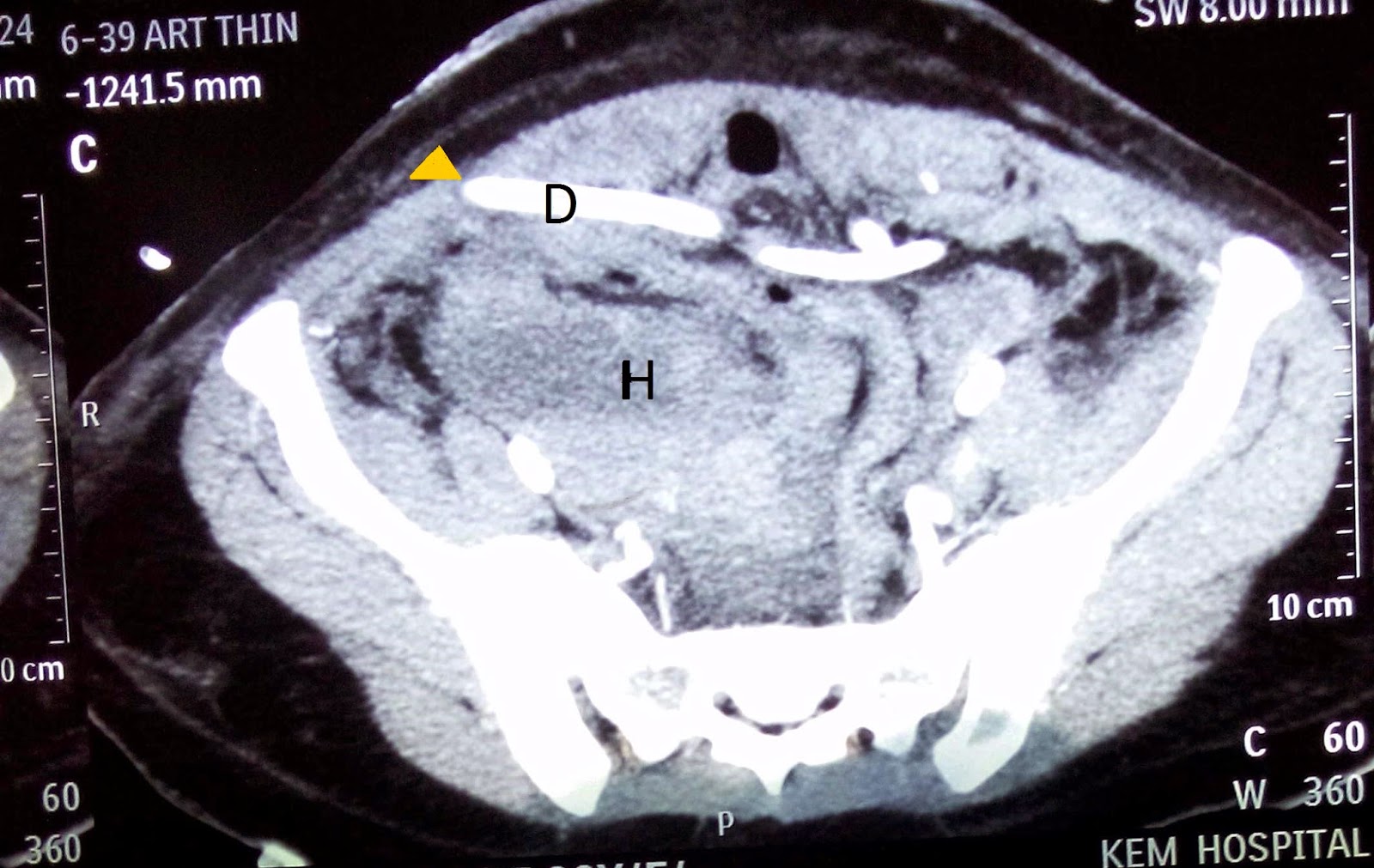 Figure 1. CT scan image. D is the drain.  H is the hemoperitoneum. Yellow arrow shows the exit of the drain.

This case highlights the reason why Pfannensteil incision is inappropriate and harmful for the purpose of Shirodkar’s Sling surgery and for an emergency exploratory laparotomy.
Although in recent times, the trend of performing Shirodkar’s Sling surgery through either of the incisions is increasing; still studies have shown that vertical midline incision is preferred, especially when the patient is short or stout.[8] However, this Such trends need to be established only after well designed case series studies establishing effectiveness and safety of either incision is confirmed and documented.  Since the number of Shirodkar’s Sling surgeries in a gynecologist’s practice is very small, gynecologists will not have sufficient training and experience to perform this highly skilled surgery. So changing an incision for the surgical approach can have dangerous repercussions that can threaten the physical and the mental health of the patient as experienced by this patient.
It is thus safe to conclude that gynecologists performing Shirodkar's sling surgery through a Pfannensteil incision are compromising the safety of the patient and should seriously reconsider prior to opting for a Pfannensteil incision for performing Shirodkar's sling surgery.

This case highlights the importance of a good choice of surgical incision. This simple yet extremely important step has the potential of deciding the outcome of the surgery as shown in this case report. A sound decision has to be made taking into account multiple variables like the diagnosis, the surgery planned, the possible complications and the patients’ physical parameters. Risk benefit ratio always has to be considered before making such choices.