Adherent placenta is a not uncommon condition at term in modern times, owing to a high incidence of cesarean section. It is much less commonly seen early in pregnancy. We report a case of placenta increta, which was diagnosed six months after a first trimester termination of pregnancy. The patient presented with symptoms suggestive of a pseudoaneurysm of a uterine artery. Investigations supported that diagnosis. However the presence of a mass and her reluctance to undergo uterine artery embolization led to performance of an abdominal hysterectomy. Pathological examination of the uterus revealed the diagnosis of a placenta increta in the upper cervical region.

A morbidly adherent placenta develops secondary to uterine scarring from past surgery like cesarean section and other uterine surgeries. A placenta previa is associated with placenta accreta in 3%, 11%, 40%, 61%, and 67% cases with prior 1, 2, 3, 4, and 5 or more cesarean sections respectively.[1] Risk of placenta accreta is 1–5% in placenta previa without previous uterine surgery. Other risk factors include advanced maternal age, multiparity, previous myomectomy, Asherman syndrome, submucous leiomyomas, endometrial thermal ablation, and uterine artery embolization.[2,3,4] It is not commonly reported after a first or second trimester pregnancy termination. When it does, the modern imaging techniques like ultrasonography (USG) and magnetic resonance imaging (MRI) help make a diagnosis quite accurately.[5,6,7] A pseudoaneurysm of a uterine artery results from trauma leading to extraluminal collection of blood with turbulent flow communicating with the lumen of the uterine vessel.[8] It causes recurrent vagina hemorrhage. A painful hematoma forms if it is surrounded by myometrium. The 3 layers of arterial wall are absent and surrounding tissues comprise the wall. We present an unusual case in which the vaginal bleeding was like that from a pseudoaneurysm, but there was a palpable mass measuring about 3 cm in diameter in the lateral part of the cervix. USG and contrast enhance CT supported this diagnosis. After hysterectomy, it turned out to be placenta increta.

A 31 years old female presented with bleeding per vaginam for one and half month with soakage of 6 to 7 pads per day and passage of clots. There was a history of termination of 3 months' pregnancy 53 days back by suction and evacuation. Her obstetric history was para1, live 1, spontaneous abortion1, and MTP 1. On examination her general condition was fair, mild pallor was present, pulse and Blood pressure were normal. Abdomen was soft and nontender, pfannensteil scar was present. On per speculum examination, fresh as well as altered coloured bleeding seen. On per vaginal examination, uterus was 8 weeks size, soft, approximately 3×3cm nontender nodule felt in the right fornix.
All routine blood investigations were within normal limits. Serum beta HCG level was less than 50 mIU/ml. Ultrasongraphy and MRI reports were suggestive of placenta increta with no obvious parametrial involvement but CT angiography showed right uterine artery pseudoaneurysm in the distal portion with surrounding hematoma. The patient was counseled about the two treatment options - uterine artery embolization (UAE) and hysterectomy. In view of possibility of the lesion being placenta increta despite a CT angiography report being to the contrary, the inability of the UAE to remove the mass present and her inability to afford UAE, she opted for hysterectomy. 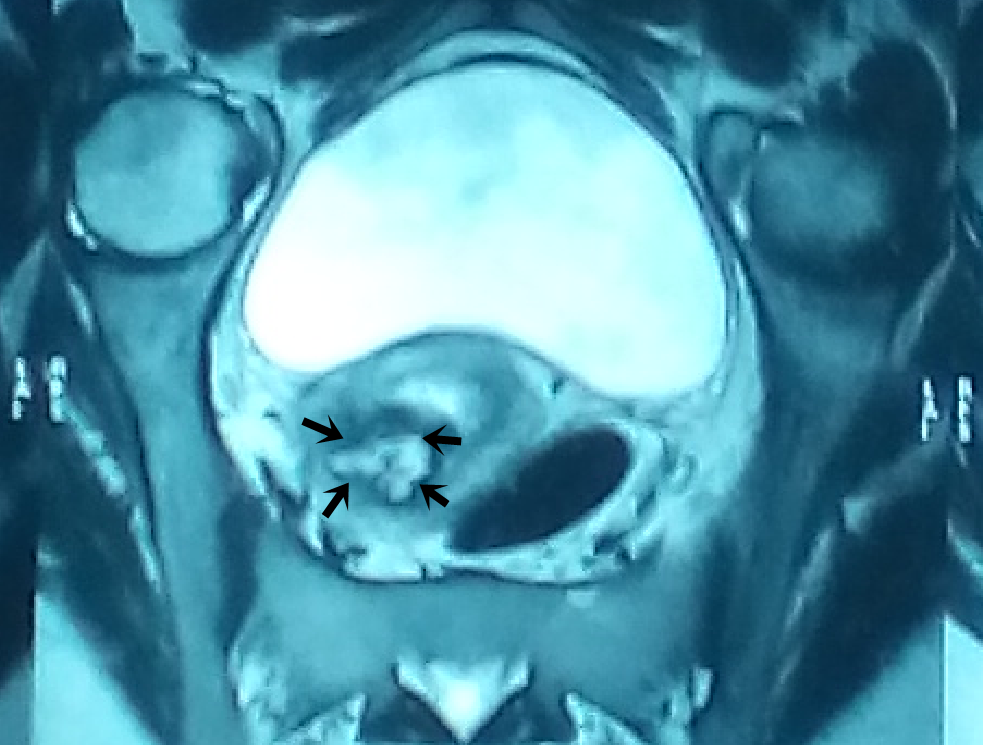 Figure 1. MRI showing the lesion in right part of the supravaginal cervix (arrows). 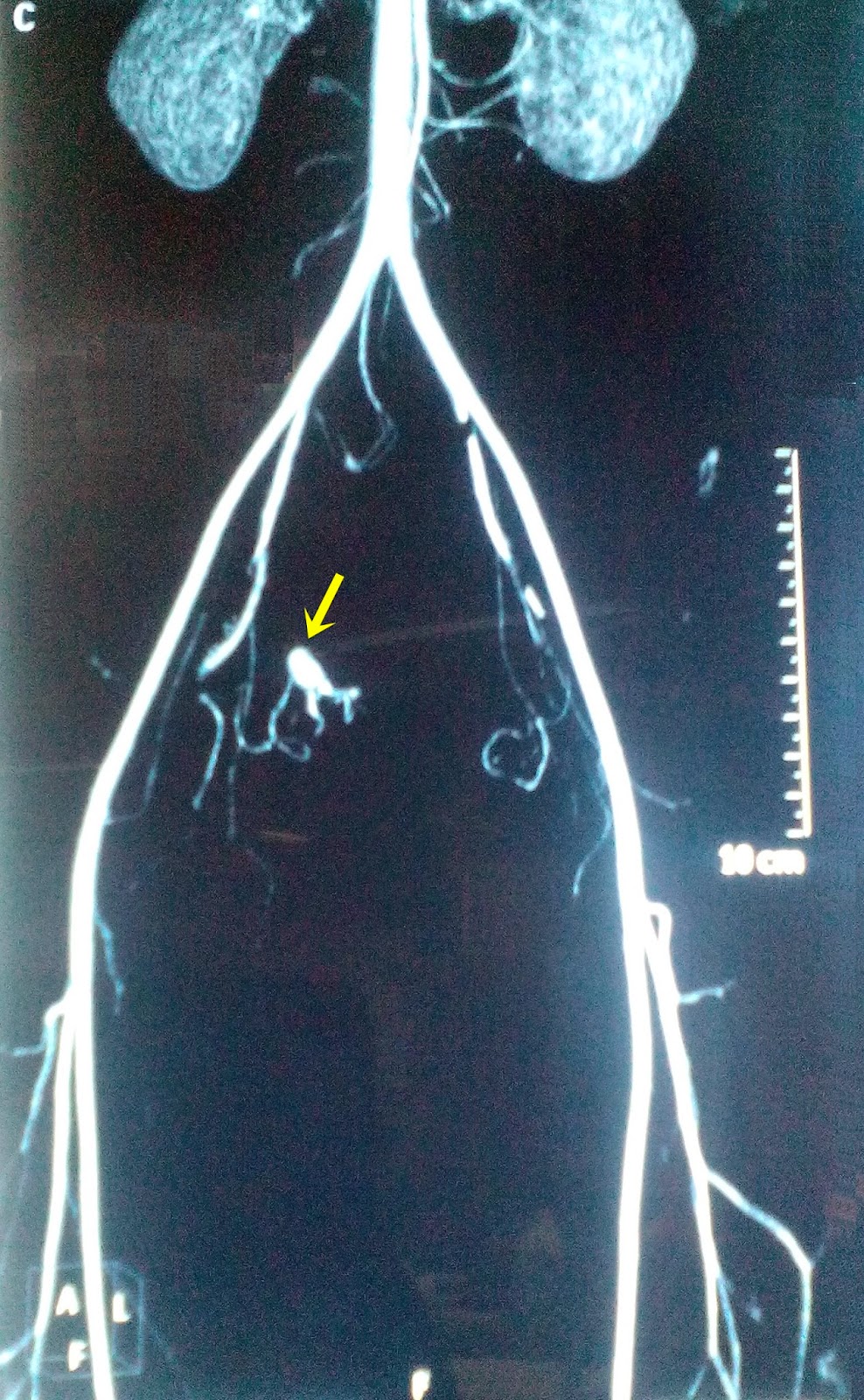 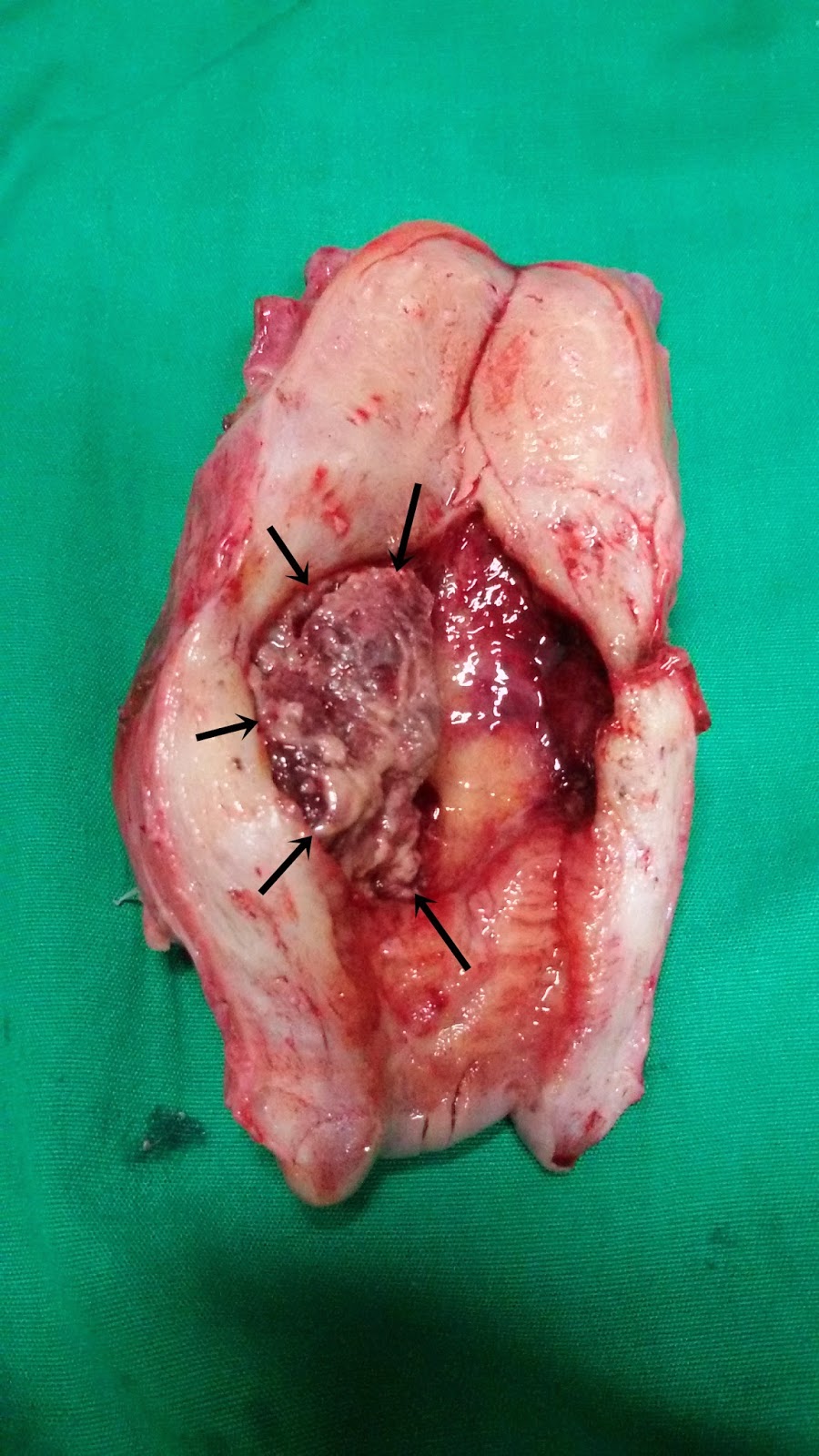 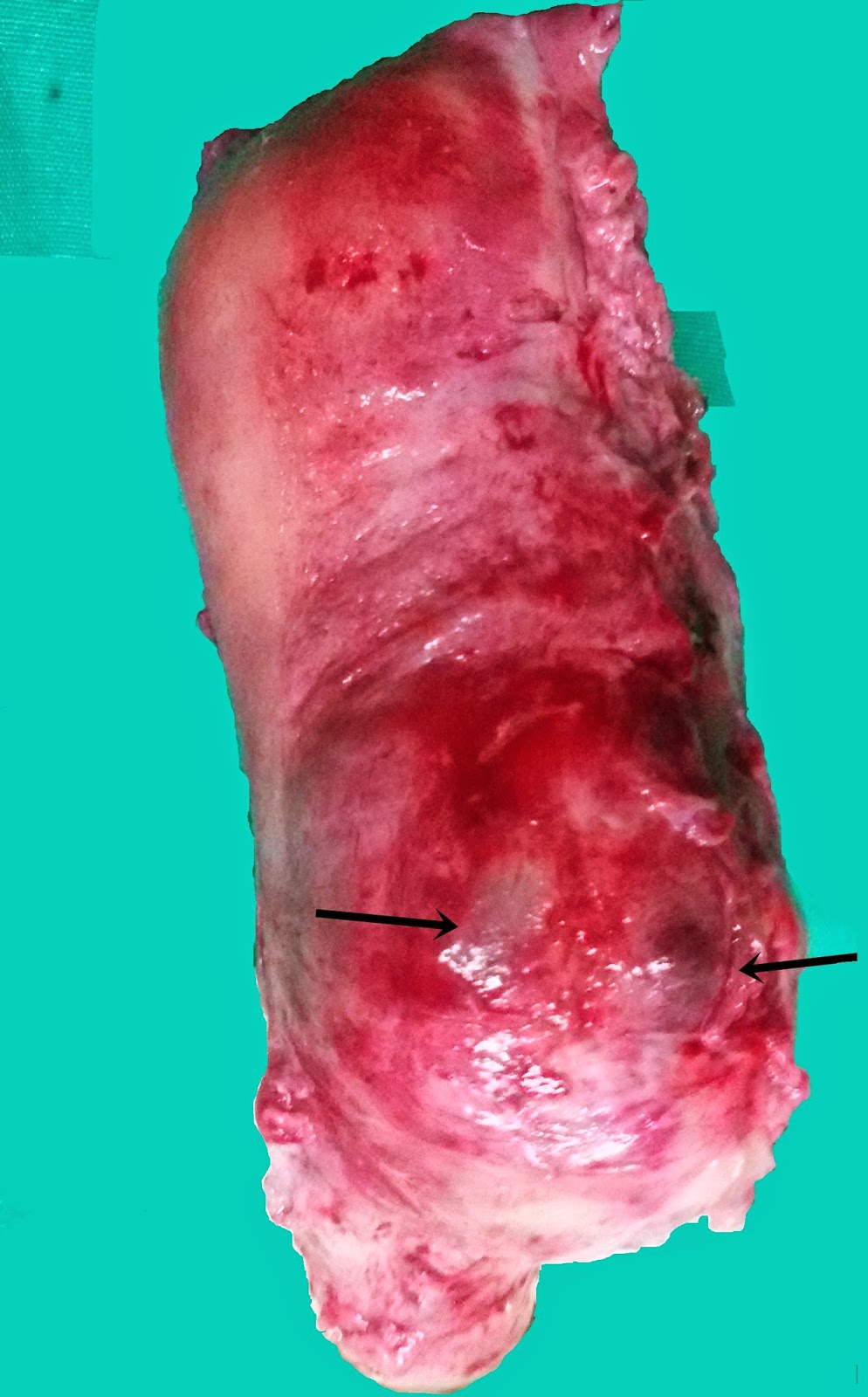 Figure 4. Dilated aneurysmal blood vessels under serosa of the right aspect of the supravaginal cervix (arrows).

A morbidly adherent placenta develops secondary to uterine scarring from past surgery like cesarean section and other uterine conditions like previous myomectomy, Asherman syndrome, submucous leiomyomas, endometrial thermal ablation, and uterine artery embolization. Usually the diagnosis is made when the patient delivers vaginally or by cesarean section, and the placenta is retained. If an attempt is made to remove it, it may lead to partial separation and severe hemorrhage. With high degree of suspicion in cases with risk factors, antenatal diagnosis is now sought with the help of USG and MRI. It is unusual for the condition to be missed after delivery or abortion. The patient in the case reported presented 53 days after a first trimester pregnancy termination. She had normal menses in between. Her USG and MRI showed uterine artery pseudoaneurysm and formation of a blood clot in the cervix. However the mass felt firm rather than soft on bimanual pelvic examination, and did not fit the diagnosis. An embolization would not have rid the patient of that mass. After counseling the patient opted to undergo a hysterectomy. Gross and microscopic examination confirmed the diagnosis of placenta increta, which had been missed at the time of the pregnancy termination. The reason the imaging tests suggested the diagnosis of a pseudoaneurysm was evident on gross inspection of the specimen (figure 3), which showed localized large dilatation vessels just under the uterine serosa, on the outer aspect of the posterior intracervical mass. A rupture of the vessel would have resulted in massive intraperitoneal hemorrhage. Attempt at surgical removal of the mass by curettage would have proved equally catastrophic.

The possibility of morbid placental adhesion must be kept in mind when a patient presents with abnormal uterine bleeding after a pregnancy and imaging techniques do not show retained products of conception. If there is a mass arising from the lower part of the uterus or upper part of the cervix, one should consider it to be a morbidly adherent placenta, even in presence of an angiography showing a pseudoaneurysm.