Meconium peritonitis is a nonbacterial, chemical inflammation of the peritoneum caused by escape of meconium into the peritoneal cavity, either in fetal life, at the time of delivery, or very shortly after delivery. This escape of meconium is due to a breach somewhere in the intestine and may be associated with bowel obstruction due to imperforate lumen, congenital bands, or other anomalies. We report a case of antenatally diagnosed meconium peritonitis without obstruction, with no definite etiology found, which resolved spontaneously; the neonate remained asymptomatic in the postnatal period.

Meconium peritonitis, a noninfectious chemical peritonitis due to perforation of small intestine and leakage of meconium into the fetal peritoneal cavity,[1,2] is seen in about 1 in 35,000 live births in the USA.[3] Its prevalence in the Indian scenario is unknown. Earlier such cases were incidentally diagnosed during X- ray pelvimetry for suspected fetal macrosomia and congenital malformations.
Meconium peritonitis may occur without any underlying cause, or the cause may be innocuous and intervention may not be required. The common bowel disorders leading to meconium peritonitis in utero are those resulting in bowel perforation due to obstruction and ischemia such as small bowel atresia, congenital bands, volvulus and meconium ileus, of which intestinal atresia appears to be the most common cause.[4] Cystic fibrosis may be a possible etiological factor in 7.7 – 40 % of cases. Therefore parents should be counseled regarding this possibility and ideally such newborns must be screened.[5]

A 23 year old primigravida, married for 1 year, presented to us with 5 months’ amenorrhea and vomiting. Routine antenatal investigations were normal, blood group was O positive; liver function test (SGOT and SGPT) were elevated. Ultrasonography (USG) showed a single live fetus of 23 weeks’ gestational age and an anterior placenta. There was evidence of moderate fetal ascites with septations and echogenic foci (calcifications) over intestinal loops. There were no cerebral or hepatic calcifications. A diagnosis of meconium peritonitis was made and the patient and her relatives were counseled about possible need of operative intervention in postnatal period. In light of these findings, TORCH titers were done which were negative. Pregnancy was supervised and serial USG done in the late second and third trimester showed persistence of the multiple calcified foci over the intestinal loops with ascites as seen in the first scan. Calcific densities also developed over liver and stomach. Bowel loops were not dilated. Fetal kidney, bladder and heart were normal. No obvious perforation was identified.
Labor was induced at 37 weeks’ gestation. She delivered a female child of 3 kg with normal Apgar score. The newborn was admitted in neonatal intensive care unit for observation. The baby’s abdomen was soft and she passed meconium spontaneously within a few hours of birth. She was given breastfeed, which was well tolerated. USG of the neonatal abdomen revealed a normal scan. Radiography of the abdomen confirmed intra-abdominal calcification consistent with meconium peritonitis. The baby was also evaluated for the possibility of cystic fibrosis; immunoreactive trypsinogen test was found to be negative. The mother and the baby were discharged on day 14 after delivery and the baby was asymptomatic at 6 weeks postpartum. 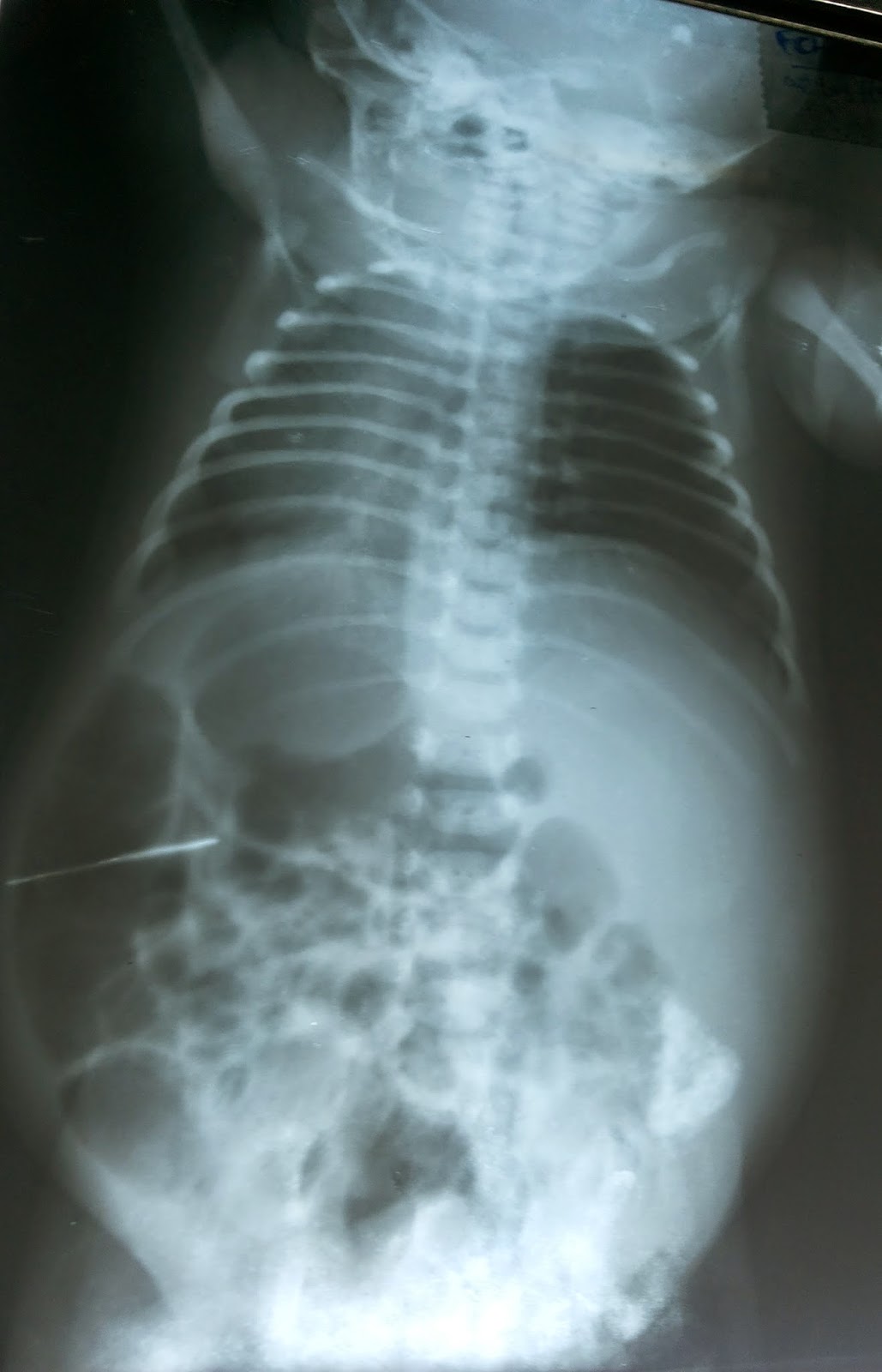 Meconium peritonitis is a sterile chemical peritonitis in which an intense inflammation results in calcification along the surface of bowel or peritoneum. Diagnosis of meconium peritonitis is rare before 20 weeks’ because peristalsis rarely commences before this time. Prenatal sonographic diagnosis of meconium peritonitis is extremely useful in postnatal management plan. Bilateral hydroceles, swollen vulvae, fetal ascites, polyhydramnios, intra-abdominal mass, bowel dilatation, snow storm appearance, highly echogenic linear or clumped foci which represent calcification may be seen. Fetal ascites tends to be echogenic. Therefore, such USG findings should be an indication for invasive procedures for fetal blood testing and parental testing for cystic fibrosis.
Meconium peritonitis is associated with a 20-30% incidence of prematurity and a 10-20% incidence of polyhydramnios. Pregnancy should be allowed to continue till term depending upon fetal growth and progression of any associated complication. Rarely, dystocia secondary to massive ascites or abdominal distension with meconium has been reported, for which cesarean section may be required. With the advent of prenatal diagnosis the outcome for this condition has improved, with survival rates up to 90%.[6,7] Mortality is high in cases where perforation persists postnatally.
Review of the literature shows that when only calcifications are present, the outcome is favorable. Once an antenatal diagnosis of complicated meconium peritonitis is reached, the mother should be referred to a tertiary care center for delivery where close monitoring and facilities for urgent perinatal intervention are available if needed.[8,9] The pediatrician should be vigilant to look for early signs of bowel obstruction in the neonate.
One of the important factors for improving outcome in such cases is anticipatory recognition of complications. Early recognition and treatment of acid base imbalance, superimposed bacterial peritonitis, and septic shock can prevent death. The timing of delivery should therefore be discussed with pediatrician and pediatric surgeon. Surgery performed within 24 hours in newborns with bowel obstruction may also improve their outcome. However, asymptomatic infants may develop bowel obstruction secondary to adhesions later in childhood which may need an urgent surgical intervention.
In conclusion, the infant in our case was asymptomatic and had an uneventful postnatal period. Probably the site of perforation got sealed spontaneously without any sequele, indicating a self- limiting process. Such favorable outcome has been described by some authors.[10,11]