The incidence of uterine leiomyomas varies from 0.3 to 7.2% during pregnancy.[1,2] The size of leiomyomas usually increases during pregnancy and causes effects such as fetal malpresentation, preterm labor and hydronephrosis. Cesarean myomectomy can be performed in selected patients. The blood loss is usually severe as the size and the blood supply of the leiomyomas are increased in pregnancy, especially at term. The risk of a hemorrhage is reportedly less with pedunculated leiomyomas as compared to that with the non-pedunculated ones.[3] We are reporting one interesting case of cesarean myomectomy.

A 38 year old female was admitted to our tertiary hospital with a diagnosis of gravida 4 para 2 living 2 medical termination of pregnancy 1, with 34 weeks and 6 days of gestation with placenta previa for safe confinement. She had previous two normal vaginal deliveries. An ultrasonography (USG) done showed a single live fetus in cephalic presentation of approximate gestational age of 33 weeks and 5 days, placenta anterior completely covering internal os, and a 5.4x3 cm size ill-defined heterogeneous lesion in sub chorionic region at superior aspect of the placenta, possibly abruption of the placenta.  Estimated fetal weight was  2141 g.
On examination, her Pulse rate was 84 beats/min and blood pressure was 110/70 mm of Hg. On per abdominal examination, the uterus was found to be 34-36 weeks in size, relaxed, with a cephalic presentation with head floating. Fetal heart rate was 145 beats/min. Per Vaginal examination was not done. Her hemoglobin was 10.6 g/dl, blood group was B positive, HIV, HBSAg and VDRL were all non-reactive. She received two doses of injection betamethasone. The USGs which were done in the second trimester and the third trimester were suggestive of low lying placenta.
She was taken for an emergency lower segment cesarean section in view of bleeding placenta previa with abruptio placenta, when she started bleeding. During the cesarean section, a submucous leiomyoma (figure 1) of size 5x5 cm was noticed in the anterior wall of the uterus, at the incision site. After the extraction of a live female baby with a weight of 2470 g, a decision to perform a myomectomy was taken because the leiomyoma was seen at the uterine incision site. Clamps were applied at the base of leiomyoma and it was excised from the base and hemostatic transfixation sutures were taken with polygalactin number 1 (figure 2). Complete hemostasis was achieved. The placenta was low lying and there was no evidence of abruptio placenta which was mentioned in USG report. The presence of the leiomyoma was misinterpreted as Abruptio placenta on USG. An oxytocin infusion was started after the delivery of the baby and it was continued for 12 hours. Broad spectrum antibiotics and analgesics were given in the post-operative period. Her post-operative period was uneventful and her post-operative hemoglobin was 9 g/dl. She did not require any blood transfusion. She was discharged on the 5th day. 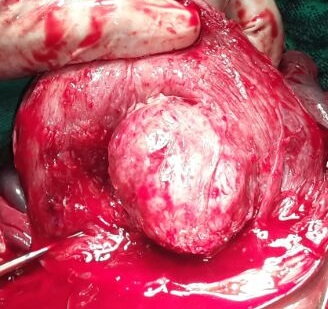 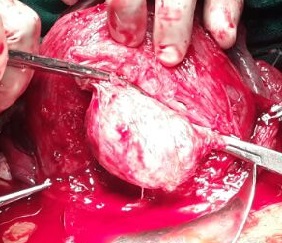 Figure 2. Clamps at the base of leiomyoma from the anterior wall of the uterus.