Endometriosis ( term coined by Sampson ) is the presence of endometrial glands and stroma outside the uterine cavity and  musculature and is a very common gynecological condition. Primary cutaneous endometriosis or umbilical endometriosis is a rare localization of extragenital endometriosis. It was first described by Villar in 1886.

Endometriosis ( term coined by Sampson ) is the presence of endometrial glands and stroma outside the uterine cavity and  musculature and is a  very common gynecological condition. The  Common sites of occurrence of endometriosis are pelvic organs especially ovaries , uterosacral ligaments and pouch of . Its average  incidence  is 7 to 10% in the reproductive age. Patients usually present with dysmenorrhea ,  menorrhagia , pelvic pain and infertility.[1] Primary cutaneous endometriosis or umbilical endometriosis is a rare localization of extragenital endometriosis .It was first described by Villar in 1886.

A 38 year old parous lady presented to the gynecology outpatient with abdominal pain and severe dysmenorrhea for a duration of nine months. She also had menorrhagia for  the last six months. The lady also described a  slow progressive, tender bluish umbilical swelling that had been growing over ten years. She complained that serosanguinous discharge from the nodule coincident with her menstrual period and tenderness around the nodule increased during this time. She attained menarche at 12 years and had previous regular menstrual cycles, with spasmodic dysmenorrhea, which was relieved after consuming analgesics and rest. Her obstetric, past medical and surgical history was unremarkable.
On examination it was seen that she had  2x2 cm nodule at the umbilical ring, which had a blackish blue hue and was  firm, tender  and nonreducible. Surface of the nodule was smooth and there was no cough impulse. The lesion appeared to be attached to the anterior abdominal wall. Her uterus was enlarged to the size of a 24 week gravid uterus and was  irregular and firm. 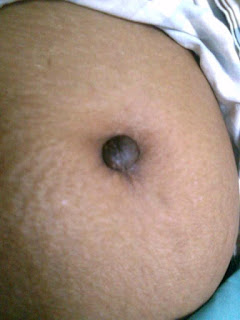 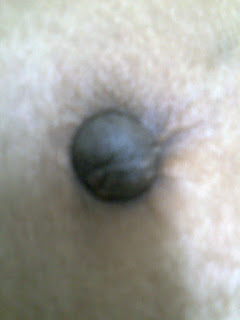 On further investigation an ultrasound revealed an echogenic subcutaneous nodule associated with multiple uterine fibroids intrabdominally. A fine needle aspiration cytology (FNAC) of the lesion  was done and the cytology smears revealed the smears to be cellular and with clusters and  sheets of hyperchromatic cells. The background of the smear showed plenty of hemosiderin laden macrophages. This finding of hemosiderin laden macrophages was highly suggestive of endometriosis. 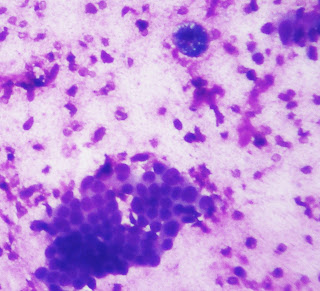 Surgical removal of the lesion, umbilical reconstruction and a  total abdominal hysterectomy with a bilateral salphingo oophorectomy  were done. Post operative  course of the patient was uneventful.
When a Histopatholgical examination of the excised nodule was done, it showed fragmented endometrial glands with sub epithelial stroma. It confirmed the diagnosis of umbilical endometriosis. The histopathology of the specimen of the uterus showed adenomyosis 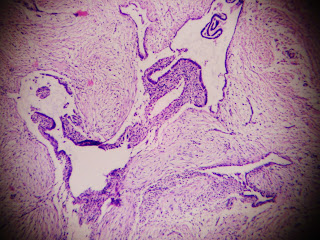 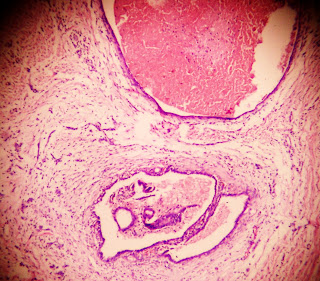 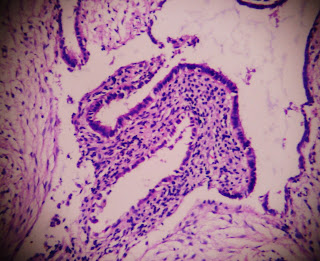 The following protocol is suggested in differential diagnosis of an umbilical nodule.[5]
If an umbilical nodule is found, the following investigations are of relevance in diagnosis: magnetic resonance imaging, epiluminescence microscopy, histology (features of irregular gland lumina in stroma – functional endometrium) and or dermascopy (shows homogeneous red coloration, regularly distributed, fading to the periphery, characteristically called red atolls).[6] The only treatment for the Villar’s nodule is  surgical excision of the umbilical nodule, which is universally recommended. The complications of umbilical endometriosis are recurrence after excision (rare) and  malignant transformation of the umbilical endometriotic nodule into endometrial carcinoma.

Umbilical endometriosis is a rare surgical entity. It should  be considered in the differential diagnosis for an umbilical lesion  and also in the diagnosis  for cyclical pain, emanating in the vicinity of the umbilicus. The key to diagnosis  is the temporal association of bleeding  from the umbilical  lesion, that is related to the menstrual period.