True Knot in a Nuchal Cord : A Dual fetal tragedy

There are many maternal and fetal causes for intra uterine fetal demise. Presence of tight loop of cord around the neck or presence of knot in the cord is one amongst those multiple causes. When these two conditions are simultaneously present the chances of fetal compromise increase tremendously. We hereby present a rare case of intrauterine fetal demise due to two tight loops of cord around the fetal neck with a co existing true knot.

A 34 years old woman married since 8years G3P2L1IUFD1 with previous lower segment caesarean section with 35 weeks of gestation came with a ultrasound (USG) scan suggestive of intrauterine fetal demise. The cause of her previous intrauterine fetal demise was undetermined.  Her serological and biochemical tests were within normal range. Pre-induction ripening of the cervix with Foley’s catheter was done followed by oxytocin augmentation. Patient delivered vaginally after 18 hours of induction. She delivered a female fetus of 2.5kg with two tight loops of cord around the neck and also the presence of a true knot in the nuchal umbilical cord as shown in figure 1. 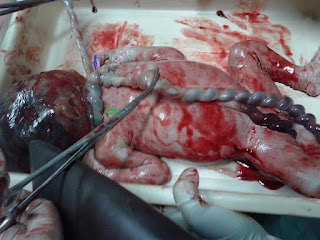 Figure1: Fresh still birth with the true knot (blue arrow) of umbilical cord and the two loops of cord around the neck (green arrow).

Umbilical cord (Funis) is the connecting link between the fetus and placenta through which fetal blood flows to and fro from the placenta. In general the cord diameter is about 1.5cm and its length varies from 30-100 cm[3]. An average umbilical cord is 55cm long and approximately 1-2 cm in diameter.  When this umbilical cord passes around the neck 360 degrees it is called nuchal cord[4]. Umbilical cord has nodes or swelling like structure at places. These swellings may be due to accumulation of Wharton’s jelly (false knots) or may be due to actual twisting of the cord upon itself (true knots). True knot is the type B pattern of nuchal cord which is described as a hitch, which can’t be removed. True knots are most likely to develop in early pregnancy when there is more liquor and are common in cases of mono-amniotic twins, advanced maternal age, long umbilical cord and fetal movements[5]. Due to the true knot, the blood flow to the fetus is compromised as the knot tightens due to either fetal movements or during labor at the time of descent. Decreased venous return from the placenta leads to asphyxia and sometimes intra uterine fetal demise. Perinatal morbidity and mortality in the form of stillbirth is increased four to ten times in case of true knot of umbilical cord[2]. Prenatal detection of cord knot is very challenging and not always possible. However detection of true knot antenatally by ultrasonography and four dimensional color doppler and its vigilant management in the form of elective caesarean section if required, can reduce the perinatal loss[6]. A medline, google, MD consult, Pubmed search did not yield any case reports documenting a nuchal cord having a true knot. Case reports with true knots or nuchal cords are well documented but this unfortunate dual tragedy is not yet reported.