Uterine leiomyoma are the most common pelvic tumors in women of reproductive age. Pregnancy can take place in spite of the presence of fibroids and can continue uneventfully. However, when the fibroids are multiple, large or if they are located in the lower uterine segment or cervix, they can adversely affect the obstetric outcome as described in our case of colporrhexis during cesarean section. The objective of this case report is to highlight the importance of surgical preparedness in multiple uterine fibroids with malpresentation of fetus.

Incidence of uterine fibroids is 20 - 25% and 2% of pregnant women have fibroids.[1,2] Most fibroids are asymptomatic but complications may be found in 10 - 30% of women with uterine fibroids.[3] Severe localized abdominal pain may occur if a fibroid undergoes "red degeneration", torsion (most commonly seen with a pedunculated subserosal fibroid), or impaction.[4] Uterine fibroids are associated with increase rate of spontaneous miscarriage, preterm delivery, placental abruption, malpresentation, labor dystocia, cesarean delivery, postpartum haemorrhage, obstetric hysterectomy and rarely colporrhexis.[5,6]

A 32 year old primigravida with 38 weeks of gestational age was taken for elective cesarean section in view of multiple uterine fibroids with fetus in transverse lie. On clinical examination uterus was 36 weeks size with a left lateral fibroid measuring 7 x 6 cm. Fetus was in transverse lie with breech felt in right flank. On per speculum examination, vagina was healthy and cervix could not be seen. On per vaginum examination, fetal parts could not be felt and 7 x 7 cm posterior lower uterine segment fibroid extending to cervix was felt. Ultrasound suggested multiple fibroids with fundal fibroid measuring 73 x 71 mm and lower segment posterior fibroid measuring 52 x 50 mm.
Intra-operative findings were multiple uterine fibroids with levorotated uterus. Levorotation was corrected and incision was taken on lower uterine segment. The uterine incision was inadvertently extended towards right lateral fornix and posterior vaginal wall. Baby delivery was difficult due to both left lateral fibroid and head on that side; and was delivered by breech extraction. While trying to look for uterine angles and lower edge of incision, it was realised that cervix was avulsed and incision was at posterior vagina. Hence colporrhexis was immediately diagnosed. With the help of senior obstetrician, right-sided uterine incision was sutured with polyglactin no.1 in continuous interlocking fashion. Avulsed cervix was sutured with polyglactin no. 2-0 in simple interrupted fashion. Bleeding was promptly controlled with uterotonics and patient received one unit blood transfusion. Post-operative course was uneventful, mother and baby went home on day 7 of cesarean section. 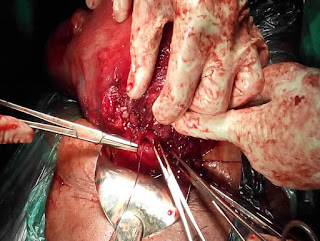 Figure 1. Colporrhexis diagnosed intraoperatively. Avulsed cervix can be seen through the uterine incision. 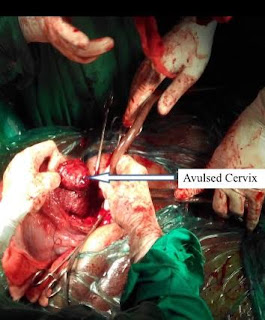 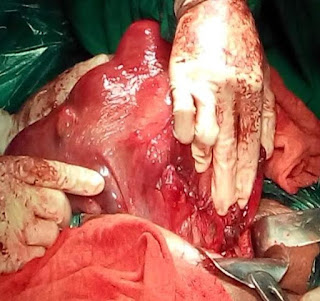 Figure 3. Uterus after suturing of colporrhexis and uterine incision.

Colporrhexis is a laceration causing separation of the cervix from the vaginal fornix.[7] It can be primary or secondary. Primary colporrhexis is a vaginal vault tear which is not associated with cervical or uterine extension while secondary colporrhexis cannot be differentiated from a rupture originating in the uterus and then extending to involve the vagina.[8] Incomplete colporrhexis involves rupture of the vaginal epithelium and the muscularis, whereas complete rupture includes the overlying peritoneum as well.[8] Colporrhexis is known to occur both in non-pregnant and pregnant state. In non-pregnant state, forceful coitus and foreign bodies are known to cause such injuries. These are more common in an already weakened vagina because of postmenopausal atrophy and previous surgery. Those related to pregnancy mostly occur during labor, spontaneously or due to trauma.[9,10] The traumatic varieties are usually the result of complications of forceps or manual removal of placenta.[10] Our case fits the description of secondary traumatic complete colporrhexis. The cause of colporrhexis in this case can be inferred to be the multiple fibroids, which distorted the uterine anatomy and led to levorotation.

Localization of the fibroids and fetal lie in a pregnant uterus are the key steps in deciding the mode of delivery. Also, fetal malpresentation should be expected in a case of multiple uterine fibroids. During cesarean section, it is important to restore the uterus to its normal anatomy, by correcting any rotation, before taking an incision on the uterus. The diagnosis of low-lying placenta and multiple uterine fibroids enabled us to anticipate blood loss. Blood and blood  products were thus kept ready for this patient and helped save precious time when the patient had postpartum hemorrhage. Iatrogenic complications, such as this case, can occur with anybody, especially with young surgeons. However the important learning point is to diagnose such complications promptly and to immediately call for help.