The broad ligament is the commonest extrauterine site for the occurance of a leiomyoma. We report a case of a 30 year old woman with a 26 weeks’ size broad ligament leiomyoma. At laparotomy it was found to be multilobulated, measuring 33x19x10 cm  and weighing 3200 g.

A 30 year old woman, para 1 living 0, presented with a chief complaint of pain in abdomen for3 days. She had no history of any bladder or bowel complaints. Her menstrual cycles were regular with moderate flow and mild pain. She had a normal delivery 12 years ago. Her general and systemic examination revealed no abnormality. Abdominal examination showed a soft, nontender mass of 26 weeks’ size arising from the pelvis. On speculum examination the cervix was high up in position. The anterior cervical lip was effaced out. A mass was arising from the posterior lip of cervix measuring 7 cm in length, and 5 cm in diameter, projecting downward into the vagina. It was continuous with the abdominal mass which had also filled the pouch of Douglas. Abdominopelvic ultrasonography showed a  large heterogenous lesion of 20x18 cm in the uterine fundus, suggestive of a leiomyoma. A computed tomography of the abdomen and pelvis showed the presence of multiple leiomyomas in the uterine fundus and body of the uterus, ranging in size from 8.3 to 11 cm (figure 1). Excretory urography showed a lateral displacement of the  left ureter and normal functioning kidneys. There was no hydronephrosis. Her hemogram showed hemoglobin to be 9.5 g/dl. Her urinalysis, plasma sugars, renal and liver function tests, chest radiograph and electrocardiogram showed no abnormality. The patient opted to undergo a myomectomy. One unit of packed red cells was transfused. At laparotomy a multilobulated  mass measuring 33x19x10 cm was seen in the left broad ligament, arising from the myometrium on the left side (figure 2). The left fallopian tube, left ovary and left infundibulopelvic ligament were stretched over its upper surface. The mass extended laterally into the iliac fossa, and posteriorly behind the cervix occupying pouch of Douglas. The sigmoid colon was adherent to the broad ligament covering the leiomyoma laterally. The uterus was normal size, elevated and displaced to the right side. The right tube and ovary were normal. The left broad ligament was opened by dividing the left round ligament between clamps. The pseudocapsule of the leiomyoma was divided on its upper surface and the leiomyoma was enucleated by sharp and blunt dissection. The sigmoid colon got separated from the mass without any harm when the pseudocapsule and overlying broad ligament were separated from the mass. The left fallopian tube and the left infundibulopelvic ligament were slipped posteriorly off the surface of the mass. The leiomyoma was found to be passing to the right side of the uterus behind the cervix, and inferiorly. It was pushed to the left during dissection, and when it was removed, it was found to include the part of the mass that had presented vaginally. There was no need to push the vaginal mass upward during the dissection. The left ureter was found to be below and lateral to the mass, unharmed due to dissection entirely within the pseudocapsule of the leiomyoma. The left broad ligament was closed and the divided left round ligament was reconstructed. The surgically resected mass weighed 3.2 kg. Cut surface showed multiple large masses with cystic areas with few areas of hemorrhage. On histopathological examination, a leiomyoma with cystic and hyaline degeneration was seen. The patient made an uneventful recovery. 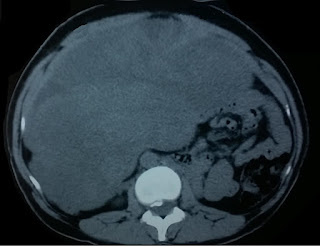 Figure 1. CT scan of abdomen-pelvis –suggestive of multiple leiomyomas in the fundus and body of uterus. 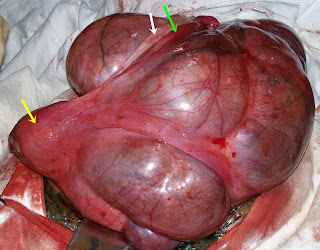 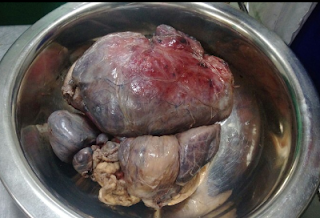 A tumors in the broad ligament sometimes attains a  large size because it is often asymptomatic. It distends the broad ligament so that the fallopian tube is stretched and lies on their upper surface. It sometimes pushes its way upwards stripping the peritonium of the  lateral wall of pelvis and iliac fossa and on left side it may burrow between the layers of the sigmoid mesocolon, the  bowel itself lying upon the tumor. The ureter can be in danger and great care is necessary not to damage this structure during surgery. A pseudo broad ligament leiomyoma arises from the lateral wall of the uterine corpus. Hence the ureter is displaced downward and laterally. A true broad ligament leiomyoma can develop anywhere in relation to the ureter, and hence must be localized before any structure is cut. Preoperative assessment of the location of the leiomyoma with contrast enhance computed tomography or excretory urography is useful for this purpose. Preoperative catheterization of the ureter is also recommended for localizing the ureter during surgery.
Our patient had some unique features. The leiomyoma was unusually large. Though it was arising on the left side, it had grown to the right side behind the supravaginal cervix, so that it appeared to be in the right broad ligament too during laparotomy. It had grown downward too, so that it appeared in the vagina like a polyp, but actually had its surface covered by vagina of the posterior fornix, which had stretched over its surface. The distortion of the normal anatomy was quite unusual, and careful attention to detail helped restoration of normal anatomy after myomectomy and reconstruction.

A diagnosis of extrauterine fibroid should be considered  in a case of pelvic masses with the normal uterus. During surgery one should be careful about the ureteric course and surrounding organs.

We thank Dr Sreshthha Mahanti for taking the intraoperative pictures.