A 39 year old G1P1L0 patient with previous one cesarean section (LSCS) presented with pain over abdominal scar site during menses and hardness along the scar. A 7x5 cm mass was present in the abdominal parietes. Fine needle aspiration cytology (FNAC) showed endometriosis. Exploration and wide excision of the endometriotic implants along with meshplasty was done. Histopathology report confirmed parietal endometriosis.

Endometriosis is the presence of endometrial glands and stroma outside the uterus, the prevalence of which is 3 to 10 % in reproductive aged women.[1, 2] Pelvis is the most common site but the ectopic endometrial tissue can be seen anywhere in the body. In surgeries, there is a possibility of direct transplantation of the endometrial glands or tissue which serves as an explanation for endometriosis found in abdominal or perineal scars.[1] The association of abdominal wall endometriosis following cesarean sections and hysterectomy was 57 % and 11% respectively.[3] Due to intrinsic abnormalities and defects in cellular immune mechanisms, refluxed and transplanted cells are probably resistant to apoptosis and macrophage mediated immune surveillance and clearance. This results in persistence of ectopic endometrial cells which can exhibit high local hormone production.[1]

A 39 year old G1P1L0 patient married since 5 years with previous one LSCS presented with pain over scar site, hardness along the scar site and dysmenorrhea since 1 year. The pain over the scar site was present only during menses. There was no associated fever, vomiting or irregular menstrual cycles. Two years back patient underwent an emergency preterm LSCS in view of bleeding placenta previa. Surgical notes were reviewed and a right lateral tear in the lower segment extending towards the body of uterus was noted. There was no previous history of any other medical, surgical illness or other operative procedures.
The patient was conscious, oriented and stable. Local examination of the abdomen showed a Pfannenstiel scar.  On palpation a large mass was present in the abdominal parietes about 7 cm in width and 5 cm in height. A 3x3 cm superficial nodule was felt at right angle of the scar. There was no guarding or rigidity present but mild tenderness was present over the scar. Cervix and vagina were healthy on speculum examination and on the uterus was retroverted, normal in size and mobile on bimanual examination. No nodularity or cervical motion tenderness was felt. Serological and biochemical investigations done were all within normal limits.
Multi Detector Computed Tomography (MDCT)  showed two ill defined enhancing soft tissue density lesions in the rectus abdominis muscle in the anterior abdominal wall. The size was approximately 5.0x3.9x2.7 cm on the right side near the right superior iliac spine and 7.0x4.2x2.6 cm in the anterior aspect in the intermuscular plane. It was extending upto the pubic symphysis. It was suggestive of endometriotic deposit/ inflammatory lesions (figure 1). Patient presented to us with these reports and patient was given medical treatment in the form of parenteral Leuprolide ( GnRH antagonist ) 3.75 mg intra muscular for three cycles. Patient was comfortable during these three months period. But patient again started complaining of pain of the same intensity at these same sites after the treatment three cycles.
Therefore along with general surgeons, exploration and excision of the endometriotic implants was performed. On exploration, intraoperative findings showed a localized hard indurated mass of size 3x3 cm at right angle of the scar (figure 2) and one large extensive indurated mass of size 10x4x1 cm was felt extending from umbilicus involving the rectus sheath and rectus muscle up to the pubic symphysis.
A wide excision of the mass along with free margins was done and the large (approximately 10x5 cm) defect of the rectus sheath was repaired with meshplasty (figure 3).
Around 0.5x1 cm lesion could not be excised since it seemed adherent to the bladder below. Superficial cauterization was done. A polypropylene mesh of 15x15 cm was sutured to the defect. Subcutaneous drains were kept bilaterally and the abdomen was closed. Drain output after the first 24 hours was 200 ml which then gradually decreased and stopped and hence on post operative day 5  the drain was removed.
On histopathological examination, sections from the subcutaneous tissue as well as from the skeletal muscle showed multiple foci of endometriotic tissue with florid fibrosis and lymphocytic infiltrate surrounding the foci. The endometriotic foci were composed of endometrial glands and stroma. Hemosiderin laden macrophages clusters were also seen. The overall impression was of endometriosis with extensive fibrosis and inflammatory pathology (figures 4 and 5). 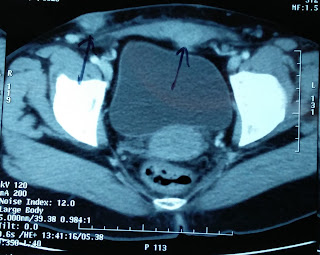 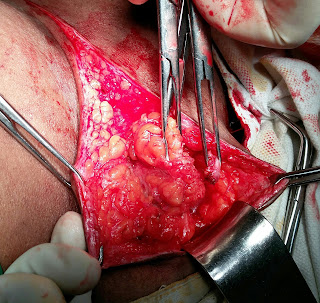 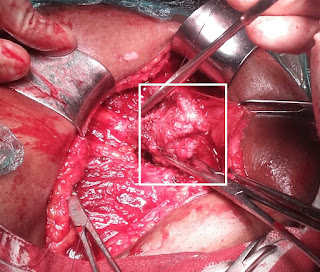 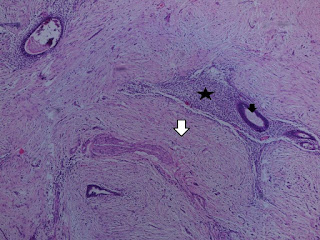 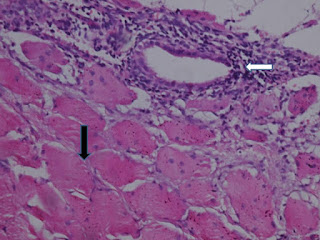 Patient was reassured postoperatively and decision was taken for three monthly intramuscular  depo provera (depot medroxy progesterone) injections of 50 mg each, which would provide reduction and suppression of the remaining mass and also have contraceptive effect as she did not desire future childbearing.

A treating physician should know that such rare presentations of endometriosis do exist and abdominal wall endometriosis (AWE) should be included in the differential diagnosis.[2] Also the diagnosis can be challenging if a high index of suspicion doesn’t exist. The correct diagnosis can often be missed.[4] Ultrasound, magnetic resonance imaging and CT can be used in the diagnosis.
Nowadays, ultrasound-guided percutaneous cryoablation seems to be promising, but wide surgical excision till date proves to be the mainstay of treatment.[3,4] In surgical treatment for endometriosis, the objectives are to excise and remove all visible disease. To prevent recurrence and proliferation of endometriosis, complete excision of the mass along with a clear margin is very important.[5] In cases where the aponeurosis is involved, we can perform a wide resection of the lesion along with free margins and if the defect is quite large, polypropylene mesh closure is done. The outcome, post surgery is successful.[4]
When the primary objective is relief from pain, post operative medical treatment can be used, particularly in women with residual disease that could not be completely excised as is done in our case as it would have involved excising a part of the urinary bladder.
Our aim is to raise the awareness of extensive endometriosis and the importance of complete excision of the lesion  and adequate closure of the abdominal wall, if needed, with meshplasty.