Paraovarian cysts are adnexal masses usually derived from the mesothelium lining the peritoneum of broad ligament. They are also thought to be arising from remnants of paramesonephric duct (lined by ciliated columnar cells) or rarely, mesonephric duct (lined by flattened cells).[1, 2] They account for about 10-33% of all adnexal masses and are usually small and asymptomatic.[1, 2] Only occasionally do they become large enough to cause pressure symptoms or undergo torsion or rupture.[1] Although laparoscopy has been used successfully for management of small to moderate sized adnexal cysts, many surgeons still prefer laparotomy for removal of giant paraovarian cysts.[3] Presented herewith is a case of a giant paraovarian cyst in an adolescent female managed laparoscopically.

A 16 year old, unmarried girl presented to the outpatient department with complaints of dull aching abdominal pain and distension since last 3-4 months. There was no history of fever, gastrointestinal or urinary complaints, anorexia, loss of weight. Patient had attained menarche at 12 years of age followed by regular menses every 30 days with average amount and duration of blood flow.  Her last menstrual period was 7 days ago. No other significant medical/ surgical history was obtained. On examination, all vital parameters were within normal limits. Abdomen was distended with a huge mass of size corresponding to 34 weeks uterus (Figure 1A), cystic in consistency, restricted mobility. Lower pole of the mass could not be reached suggesting a pelvic origin. Ultrasonography and Computed Tomography revealed a 26x18 cm left ovarian simple cyst, unilocular with smooth surface and absence of any septations or solid areas. Uterus and right ovary were normal. Laboratory investigations including tumor markers (CA-125, β HCG, α fetoprotein & lactate dehydrogenase) were within normal limits. A diagnosis of a benign left ovarian cyst was arrived upon and laparoscopic cyst excision was planned.
A supra-umbilical 10mm primary port was created using direct trocar entry technique. Two 6 mm ports were then placed under vision in left upper and lower quadrants, taking care not to puncture the cyst. Findings at laparoscopy showed large smooth walled paraovarian cyst. The cyst had reached underneath the liver (Figure 1B). Both the ovaries were seen separate from the cyst. A small linear incision was made over the cyst at an area away from the fallopian tube using scissors. The cyst wall was punctured and around 2 liters of clear fluid was drained using a suction cannula, taking care not to cause spillage. Cyst wall was held with a blunt grasper and traction applied upwards to facilitate peeling off from the broad ligament (Figure 1C). Simultaneous coagulation of vessels in the bed of the cyst was performed using bipolar diathermy. Completely excised cyst wall was retrieved through the left lower side port. Thorough peritoneal wash was given with 1 liter of warm normal saline and hemostasis was confirmed (Figure 1D). There were no intra operative complications. Postoperative course was uneventful and patient was discharged on day 3. 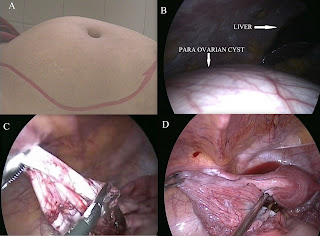 Paraovarian cysts are more commonly diagnosed in women in their 3rd – 4th decade of life, possibly because they remain small and asymptomatic for many years before being diagnosed.[1, 2] Occasionally, they may undergo massive enlargement, rupture, hemorrhage or torsion.[2] Reports of giant paraovarian cysts, especially in young females are sparse and there are no strict numerical criteria to define ‘giant/ huge’ paraovarian cysts.[4] We searched the literature on huge paraovarian cysts in young adolescent females using different terms like ‘huge’, ‘giant’, ‘voluminous’ etc. and found eight such reports in females aged between 14- 19 years,[3-10], two case reports in elderly females aged 74  and 40 years,[11, 12] and one report during  pregnancy. [13] Maximum diameter of the paraovarian cysts in these reports ranged from 20 cm to 40 cm.
Paraovarian cysts are often misdiagnosed as ovarian cysts on preoperative imaging using ultrasonography, CT scan and/ or MRI, as with our case.[2] The most probable reason being difficulty in visualizing the ovaries separately from the mass, more so with huge masses.  It is only during surgery that the diagnosis becomes evident.[1, 2] Although these cysts are usually benign, occasional borderline and rarely, malignant tumors have been reported to occur in these cysts.[1] Hence, a complete preoperative workup to rule out malignancy, including serum tumor markers, is mandatory. In the present case, the preoperative workup suggested a benign cyst, hence decision of laparoscopic cystectomy was taken.
Decision of laparotomy vs laparoscopy depends on many factors like size of the cyst, nature of the cyst (benign or malignant), availability of good instruments and expertise for laparoscopic surgery. Most authors opt for standard laparotomy with vertical midline incisions extending above the umbilicus for giant paraovarian cysts.[3, 5-7, 11] Most common reasons of preferring laparotomy over laparoscopy for giant paraovarian cysts is limited space within the abdomen and risk of cyst rupture during laparoscopy.[4] Three case reports advocate minilaparotomy with smaller incisions followed by cyst aspiration to reduce the size of the cyst.[4, 8-9] One author advocated ultrasonography guided cyst aspiration followed by laparoscopic excision of the cyst wall.[12] Only two case reports describe pure laparoscopic excision of giant paraovarian cysts. Rouzi et al  achieved complete cyst excision of a 20 cm paraovarian cyst in a pregnant patient at 20 weeks of gestation.[13] Leanza et al described laparoscopic excision of a huge paraovarian cyst (diameter 30 cm) in a 14 year old obese girl.[10] The surgical techniques and other details of these two cases are given in Table 1. In both cases, there were no reported intra/ post operative complications and ipsilateral ovary and fallopian tube were well preserved, which was true for our patient too.
The two most important aspects of laparoscopic surgery in patients with huge paraovarian cyst are techniques of abdominal entry and tissue retrieval. A supra-umbilical site for primary trocar placement is recommended, as it allows greater degree of freedom for manipulation, gives a better vision and also reduces the chances of injury to the cyst.[14] Entry via Palmer’s point (a point 3 cm below the left subcostal margin in the midclavicular line) or the Lee Huang point (a point over the midline, midway between the xiphoid process and the umbilicus) may also be considered as alternatives to umbilical entry for the same advantages as cited above.[15] The open method (Hasson’s technique), where peritoneum is opened and trocar is placed under vision, is especially useful in patients with suspected intra peritoneal adhesions and may also prevent cyst rupture in cases with huge ovarian/ paraovarian cysts. As far as the use of Veress needle for primary port placement is concerned, the recent Cochrane review states that while the risk of visceral and solid organ injury remains the same, the risk of vascular injuries and failed insertions is definitely decreased with the direct trocar insertion technique as compared to Veress/ trocar insertion.[16] Thus, no one method can be recommended as superior to the other and we believe that a surgeon should choose the method of entry depending on his expertise and the patient characteristics. In the present case, the author utilized a direct supra umbilical trocar entry. For retrieval of the cyst, cyst fluid had to be aspirated to decrease the size followed by complete excision of the cyst wall. The risk of inadvertent spillage of cyst fluid and spread of malignant cells remains a concern; however, with proper patient selection to exclude cases of malignancy, this approach appears to be safe even in huge cysts.[17] Smaller cysts may be completely enucleated, placed in an endobag and then decompressed to avoid spillage of cyst fluid in the peritoneal cavity and also avoid contamination of port site that can occur while retrieving the tissue. However, the endobags have there own disadvantages (they are costly, available in predetermined sizes, difficult to manipulate and may rupture intraoperatively), hence there use should be individualized.[18]
Laparoscopy has well known advantages over traditional laparotomy like shorter hospital stay, rapid recovery, better cosmesis (desirable especially in adolescent females).[10, 13] Laparoscopy may also allow a better chance to preserve ovary and fallopian tube due to its excellent magnification power.[10] Hence, in our opinion, in cases of giant paraovarian cysts where malignancy is excluded, by detailed preoperative workup and intra operative inspection of cyst, laparoscopy may be safely employed for their excision, provided adequate expertise is available.

Paraovarian cysts as a differential diagnosis should be kept in mind in women presenting with adnexal masses. A complete preoperative workup is a must to rule out rare possibility of malignancy in these cysts. Laparoscopic excision of these cysts appears to be safe and effective in properly selected cases and in expert hands despite their huge sizes.