Paraganglioma of the urinary bladder is found not commonly during pregnancy. Its management often involves excision of the urinary bladder, which may require an augmentation cystoplasty at a later date. Management of pregnancies after an augmentation cystoplasty can be quite challenging. We present such a case managed successfully.

Though pregnancies following urological procedures have increased significantly, little information is available regarding pregnancy outcome in women who have undergone augmentation cystoplasty.[1] We report a case of previous Lower Segment Caesarean section (LSCS) with augmentation cystoplasty done after paraganglioma excision which had resulted in Vesicoaginal Fistula (VVF).VVF was then corrected at a later date by Martius flap after which the symptoms  had subsided but not completely resolved .Our patient underwent emergency LSCS for previous LSCS with previous VVF repair surgery at term. The obstetrician should work along with urologists in management of such cases.

A 27 year old , Gravida 3 Para2 Living 1 IUFD1 with 38 weeks’ gestation was admitted for safe confinement. She was a known case of paraganglioma excision with partial cystectomy with augmentation cystoplasty followed by VVF repair. She was diagnosed with bladder paraganglioma 2 years ago when she was pregnant with her second child. Ultrasonography (USG)  and  magnetic resonance imaging (MRI) of the abdomen and pelvis had revealed a 6.5 x 5.5 cm mass in inferior wall of bladder, a 10.8 x 5.6 cm hematoma within the bladder with intrauterine gestation of 12 weeks. Partial cystectomy with paraganglioma exicion was done at 3rd month of gestation after transurethral biposy of tumor showed a paraganglioma of the bladder. She made an uneventful recovery thereafter though she continued to dribble some urine all the time. She underwent LSCS at 38 weeks for breech presentation, delivering a 2.8 kg baby.  Patient had continuous dribbling of urine, 6 months after the LSCS, due to small capacity of bladder for which she underwent augmentation cystoplasty using ileal segment. Her symptoms had not relieved  and perspeculum examination showed leakage of urine along left anterolateral wall of the vagina about 4 cm from introitus suggestive of a vesocovaginal fistula (VVF).VVF repair with Martius flap interposition was done by vaginal approach. One month following VVF repair, she conceived and she was advised medical termination of pregnancy(MTP) in view of  recent major VVF repair, possibility of injury to augmented bowel, intestinal obstruction during delivery, and recurrence of VVF after delivery. She deferred her decision for some time after which she was beyond the legal limit for termination and she continued her pregnancy. She followed up regularly in the antenatal and urology clinics. Her renal function tests (RFT), urine routine microscopy and culture sensitivity were regularly monitored. Her plasma free normetanephrine level was also normal. She was  admitted for safe confinement at term. Her RFT, urine routine microscopy and urine culture sensitivity were within normal limits. She  underwent emergency LSCS in view of previous LSCS with previous VVF repair surgery. Urologist were informed and kept standby. A liberal infraumblical vertical incision was given. Intraoperatively uterovesical fold was seen densely adherent to the lower uterine segment.A segment of ileal loop was seen near the lower segment of uterus. A transverse incision was taken 3 cm above the uterovesical fold without dissecting adherent uterovesical fold and disturbing augmentation cystoplasty and its blood supply. Exteriorizing the uterus revealed a bicornuate uterus with rudimentary left horn. LSCS was uneventful and she delivered female child of 2.4 kg. Postoperative course of the patient was uneventful and on discharge she was advised to follow up in postnatal and urology clinics. 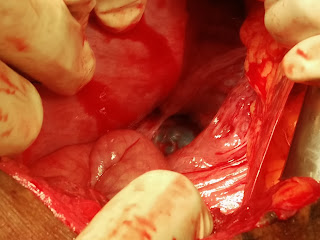 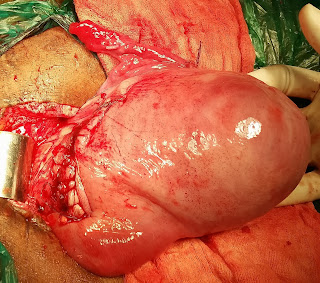 VVF is still one of the common uro-gynecological problems in developing countries. Though obstetric causes commonly result in VVF in developing countries, our case was following an elective urological procedure of partial cystectomy for excision of a paraganglioma of the urinary bladder. Pregnant women with VVF or history of VVF repair should be managed in a tertiary center where facilities of LSCS, senior consultants and urologists are available. All patients with history of VVF repair should be posted for elective LSCS or an emergency LSCS, in case patient is in labor. There are very few case reports of pregnancy following abdominal cystoplasty procedure.[2,3] There are some anatomical changes occurring after bladder augmentation. Ileo-cystoplasty involves fixing it cranially by the mesentery, laterally by ureter, and caudally by the trigone and urethra.[1] When the uterus enlarges, mesentery shifts to one side reaching the anterior abdominal wall. There is possibility of damage to augmentation or its blood supply in a cesarean section. Previous pelvic surgery may also lead to dense adhesions. For these reasons, some authors recommend the upper-segment cesarean section rather than the LSCS in such cases.[4] A urologist should be kept standby before the LSCS is started as they are well versed with an augmented bladder. In the case presented, as no dense adhesions were found near the lower uterine segment after taking a liberal midline infraumbilical vertical incision, a decision to go ahead with a LSCS was taken. The bladder dissection away from the lower uterine segment which is a standard step in a routine LSCS can be avoided if possible as it may disrupt the repair already done. As the ileum is mobilized for maintaining the vascularity, risk of bowel injury during LSCS should be kept in mind. The cesarean section should be performed by senior consultants not only to prevent such injuries but also to detect them in case inadvertent injury occurs. Proper antenatal care should be given to all women who have undergone augmentation cystoplasty. Early registration, identification of high risk factors like urinary tract infection(UTI) and its aggressive management, and monitoring of renal function, diagnosing hydronephrosis on USG is important in optimum management of these patients.[5]

The goal of management of patients with augmentation cystoplasty is safe delivery resulting in a healthy baby, while preserving of urinary tract integrity and renal function. The problems frequently encountered in these patients are urinary infections, hydronephrosis, or deterioration in renal function. The obstetrician and the urologist should work in unison in managing the problems of such women, preferably in a tertiary center.