Vaginal leiomyoma is an extremely rare benign smooth muscle tumor in the vagina. The etiology is unknown. It arises most commonly in smooth muscle layer of midline anterior vaginal wall. Patients are asymptomatic initially. Symptoms start with the growth of the leiomyoma due to compression when it grows larger in size. Most vaginal leiomyomas are not diagnosed clinically but only on histopathology. Sometimes they can be associated with leiomyomas at other locations in the body. The imaging findings are that of a well-defined enhancing soft tissue mass arising from the vagina. They may be confused with other vaginal tumors and even urethrocoele. A preoperative diagnosis is essential to decide the surgical plane and surgical route. We report a case of primary leiomyoma of the vagina arising from its anterior wall and presenting with complaints of lower abdominal pain and something coming out per vaginum.

The vaginal mucosa is a nonkeratinized, stratified squamous epithelium. Vaginal submucosa is composed of connective tissue with elastic fibers, lymphatics and venous plexus. The submucosa is surrounded by muscularis having a circular layer of muscle overlaid by a longitudinal layer. A layer consisting of loose connective tissue covers the muscularis. Tumors arising from the vaginal tissue include papilloma, haemangioma, polyp and rarely leiomyoma.
Leiomyomas are the most frequent gynaecological tumors that are seen in about 20-40% of women after 35 years of age. Commonly leiomyomas arise from uterus, however they may arise from extrauterine sites including cervix, vagina, round ligament, ovary, fallopian tubes, and uterosacral ligament. A firm single, globular or polypoidal mass appearing in the vagina is usually a leiomyomatous polyp arising from the cervix or from within the uterine cavity. Other conditions mimicking a vaginal leiomyoma include urethral diverticulum, cystocele, Skene duct abscess or vaginal malignancy. Vaginal leiomyomas are benign, solitary, smooth muscle masses, and when they enlarge in size, symptoms may include vaginal discharge, intermenstrual bleeding, dyspareunia, something coming out of vagina and urinary retention.[1] Diagnosis is usually difficult preoperatively but can be confirmed with the help of better imaging techniques such as magnetic resonance imaging (MRI). Diagnosis also can be confirmed either by frozen section or postoperative histopathology.

A 40 year old female reported to our OPD for something coming out of vagina since six months. She had previous three full term vaginal deliveries and last delivery was 10 years back. She gave history of something coming out of vagina since six months, dyspareunia, white watery discharge since 6 months.  On examination, a mass of 8 x 8 cm was felt from the vagina anteriorly extending from urethral meatus to external os of cervix. It was single, non tender, firm to hard in consistency with a decubitus ulcer on it. The uterus could be felt separate from the mass and cervix could be visualized separately. Diagnosis of vaginal wall cyst or anterior vaginal wall leiomyoma was made. 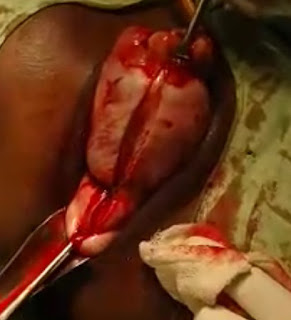 Her routine biochemical and hematological investigations were within normal limits. Excision of vaginal leiomyoma under spinal anesthesia was planned. Bladder was catheterized and vaginally the extent of bladder was assessed by bladder sound. Vertical incision was made on the mass after infiltration with adrenaline and normal saline. Plane of cleavage was good with a defined capsule and the mass could be enucleated completely. The mass looked like a leiomyoma and was sent for histopathological examination. 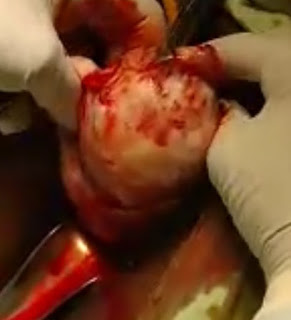 A leiomyoma of vagina is a rare condition. Majority of leiomyomas arise from the body of the uterus and sometimes from the cervix. Extrauterine sites include round ligament, uterosacral ligament, ovary and very rarely vagina and vulva.  Most of these cases are not diagnosed primarily as leiomyomas, and diagnosis can be established only by histopathology.
In the vagina, a leiomyoma usually presents as a single, intramural or pedunculated, solid or cystic, well-circumscribed mass arising most commonly from the midline anterior wall and less commonly from the posterior or  lateral walls  in women between 35-50 years of age. Ultrasonography usually diagnoses it to be a cervical leiomyoma. MRI shows it as a well-delineated solid lesion of low signal intensity in T1- and T2-weighted images, with homogenous contrast enhancement similar to myometrium.[2]
These rare lesions are asymptomatic initially. Symptoms may arise due to compression from the growing tumor varying with the size and location of leiomyoma. Leiomyomas of vagina commonly are slow in growth and solitary in number. Presentation can be as urinary symptoms like increased frequency, urge and urinary retention due to pressure on the urinary bladder.[3] Other symptoms include dyspareunia and pelvic pain. Low back pain occurs due to pressure on the pelvic ligaments. If situated superiorly, they can involve the distal ureters to cause hydronephrosis, which can be assessed by intravenous urography. Large lesions may interfere with vaginal delivery. Though the lesion is usually benign, sarcomatous changes have been reported. There are case reports of leiomyosarcoma in the posterior wall of vagina.[4] Histopathology is the gold standard of diagnosis to rule out malignant change.
On gross examination, it is firm, well circumscribed homogenous mass resembling its uterine counterpart. On cut section it is white to tan with a whorled pattern like any other leiomyoma. On microscopy, it consists of fascicles of uniform smooth muscle cells having a typical spindle shape with less prominent cell borders and pale eosinophilic cytoplasm. Cystic degeneration visualized as watery collection in the interstitium is seen in larger tumors.
Surgical management is always indicated, the only problem being the most effective approach. Excision and enucleation is the treatment of choice. Surgical removal of the tumor through vaginal route, preferably with urethral catheterization, is usually preferred as there is availability of good surgical plane. Sometimes vaginal approach may cause severe hemorrhage if the whole leiomyoma  is not approachable. It is advisable to choose abdominal route for such cases. For huge tumors, an abdominoperineal approach is needed to perform complete excision. Preoperative embolization may be helpful in reducing vascularity of such tumors before excision as these tumors at times present with life-threatening hemorrhage due to hypervascular nature.
Recurrences have been reported. Patients need to be followed up after surgery for chance of recurrence. The tumor is hormone-dependent and usually regresses after menopause. Though location of a leiomyoma in the vagina is rare, it should be considered in the differential diagnosis of a vaginal swelling.