A 24 year old unregistered, full term primigravida, came with complaint of minimal abdominal pain. On per abdominal examination the uterus was full term and irritable, the presentation was cephalic, and the fetal heart sounds were normal. On per vaginal examination a 10 x 10 cm hard, immobile, non tender mass was found, arising from the right anterolateral pelvic wall. The cervix was 2 cm dilated, 60% effaced and was pushed to the left posterolateral side. Fetal head was high up and the mass was preventing the head from entering the pelvis. The membranes were intact. Ultrasonography (USG) showed 10x8 cm sized bladder stone. CBC and serum creatinine were within normal limit. HIV, and HbsAg were negative. The patient was advised cesarean section. She went home and came on the next day with increased pain in abdomen. Her examination showed the cervix was 3 cm dilated and thick. There was minimal caput, station was high, and membranes were absent. Emergency cesarean section was done with a urosurgeon stand by. Healthy male baby was delivered. Diagnosis of bladder stone was confirmed intraoperatively. The stone was not removed. It was hard, mobile, 12x 12 cm in size inside the bladder (figures 1 and 2). Postoperative course was uneventful. 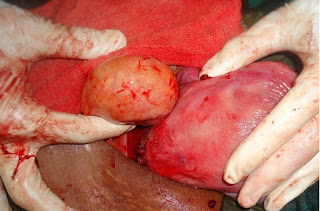 Figure 1. Vesical calculus lifted out of the pelvis. 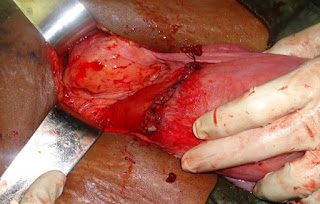 Figure 2 Vesical stone in the pelvis.

Previously totally asymptomatic bladder stone obstructing labor has been a very rarely reported entity. Bladder stones are mostly formed of calcium phosphate. Congenital and acquired diverticuli of the urinary bladder may be a reason for stasis and development of calculi. Contrary to past teaching, a low-calcium diet promotes stone formation. There is no evidence to state that pregnancy increases the risk of stone formation. Prevention can be done with hydration and diet low in sodium and protein. Dysuria, frequency, hesitancy, and terminal hematuria are symptoms of vesicle calculus. High index of suspicion is needed for diagnosis of a bladder stone. In general during pregnancy urinary obstruction, recurrent severe infection, intractable suprapubic pain and heavy bleeding are indications for stone removal. The early diagnosis and appropriate surgical management of a large vesical calculus prevent complications like recurrent urinary tract infections and obstructed labor.[1] The differential diagnosis of hard mass felt on vaginal examination and obstructing labor is broad ligament fibroid, carcinoma cervix or carcinoma of rectum invading the parametrium, a giant fecolith, ovarian tumor, hydatid cyst, and a lesion from lateral bony pelvic wall. In my case diagnosis was confirmed by ultrasonography, but radiography can also be a good diagnostic tool. Otherwise in other suspicious cases CT scan (not recommended in pregnancy) and MRI can also be helpful according to availability. Rarely PET scan can be done. If the patient is first seen in labor it may be possible to displace the calculus above the presenting part and allow spontaneous vaginal delivery.[2] But if this is difficult, cesarean section should be performed. In my case displacement of the stone above the presenting part was not possible so I decided to do cesarean section. I kept a urosurgeon as standby. Intraoperatively there was no difficulty in delivery of the baby. The stone was not removed simultaneously as there was high chance of fistula formation as there is marked congestion with hypertrophy of the muscles and elastic tissue of the bladder wall.[3] Particularly in a nulligravida woman in late pregnancy in whom the presenting part often engages before labor, the entire base of the bladder is pushed forward and upward, converting the normal convex surface into a concavity. As a result, difficulties in diagnostic and therapeutic procedures are greatly increased. In addition the pressure of the presenting part impairs the drainage of the blood and lymph from the bladder base, often rendering the area edematous, easily traumatized, and probably more susceptible to infection.[4] The stone can be removed less invasively by cystolithotripsy later on. Unfortunately patient did not come for follow up. So further management of the bladder stone could not be done.