Müllerian anomalies represent a vast range of structural abnormalities resulting from the improper development of the embryological müllerian ducts. Use of magnetic resonance imaging is very helpful to diagnose such anomalies. A nulligravida was diagnosed to have a septate uterus with double cervix and a vagina with partial longitudinal vaginal septum.  A rare developmental version is a septate uterus with cervical duplication and a complete longitudinal vaginal septum. The existence of this anomaly challenges classical müllerian developmental theory.

Congenital uterine anomalies in the population are estimated to have an incidence of 0.001-10%.[1] A rare developmental anomaly is a septate uterus with cervical duplication and a complete longitudinal vaginal septum. The presence of this malformation challenges classical müllerian developmental theory. Fusion defects of the müllerian ducts have been described by the American Fertility Society.[2] But, septate uterus with cervical duplication and longitudinal vaginal septum is not detailed by this classification. This paper outlines description of such a case. Only six  such cases have been reported in the world literature.[1] This report should help understand the embryogenesis of the female genital tract better and also improve the existing classification systems.

A 22-year-old woman, married for 4 years, presented with a complaint of oligomenorrhea and primary infertility. She reported menarche at age 13. Her past menstrual cycles were regular. Gynecological examination revealed a phenotypic female, breast development of Tanner stage IV, normal external genitalia, a longitudinal vaginal septum  and two normal appearing cervices (figure 1). A 3D ultrasound was suggestive of septate uterus (figure2). There were no anomalies of the urinary tract. Her reports of investigations for fitness for anesthesia were normal. Hysteroscopy showed incomplete uterine septum in the uterine cavity. The continuity of the uterine cavity below the lower edge of the septum and above the internal of each of the cervix was demonstrated by a curious phenomenon of the uterine distension fluid spurting out of the right cervix when a hysteroscope was passed into the left cervix and distension medium (Ringer's lactate) was injected under pressure (figure 3). It was visualized by passing a uterine sound through the right side cervix and visualizing it through the left cervix using the hysteroscope, from below the lower edge of the cervix.. Laparoscopy revealed a single uterus with broad fundus (figure 4) and bilateral hydrosalpinx (figure 5). The ovaries were normal.  The patient's postoperative course was uneventful. 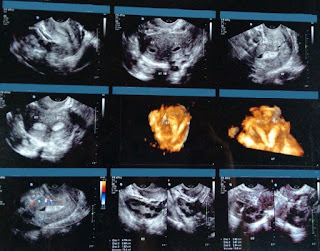 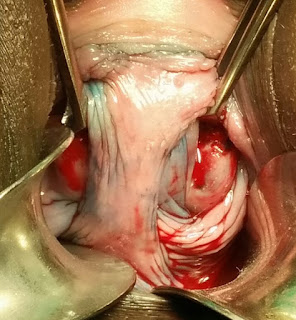 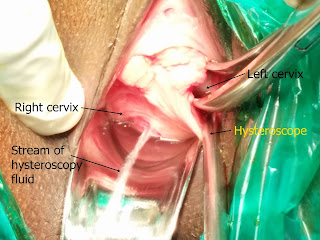 Figure 3. Hysteroscopy fluid spurting out of the right cervix when hysteroscope was passed through the left cervix. 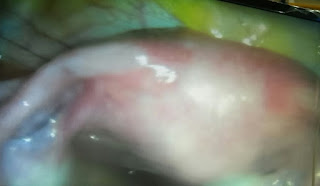 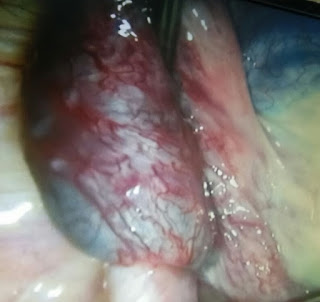 This interesting müllerian anomaly of a partial uterine septum, dual cervices and longitudinal vaginal septum cannot be explained by the commonly used classification of anomalies suggested by Buttram.[3] Review of the literature reveals this to be an uncommonly reported anomaly.[4,5] These anomalies are contradictory with the theory of linear caudal to cephalad müllerian fusion as described by Crosby and Hill in 1962.[3] Specifically, this theory supports that uterine development is the result of the fusion of the müllerian ducts during the embryonic life in an early stage of development, starting at the most caudal aspect known as the müllerian tubercle and moving in a cranial direction. Septal resorption was thought to follow shortly thereafter, starting at any point of fusion and going in either or both directions. The case reported here cannot be made clear by this theory, because a dual vagina-cervix complex expresses failure of caudad fusion while a septate uterus indicates normal cephalad fusion with unsuccessful septal resorption. The present case is explained better by the hypothesis suggested by Musset et al. and advocated by McBean and Brumsted when they described one more similar anomaly.[4] Musset put forward an alternative, three-stage series of process in which the medial aspects of the müllerian ducts begin to fuse in the middle and continue in both the cephalad as well as caudal directions simultaneously. This is then accompanied by fast cellular proliferation between the ducts, configuring the uterine corpus and cervix, and septal resorption, all of which occur in either directions simultaneously. According to this supposition, the dual vagina/cervix complex could be described by failed fusion of the müllerian ducts in the caudal direction starting towards  the uterine isthmus. The septate uterus plus vagina could then be explained by complete failure of normal septal resorption after  normal fusion. This anomaly is classified by Toaff as a Type 1A uterine communication and further approves Musset's theory of embryologic development.[5] Parulekar’s EAC classification of congenital malformations of the female genital tract covers this anomaly.[6] Its description is as follows: FAR-hydrosalpinx,  FAL-hydrosalpinx, UtR1-5 cm Fn NoObst, UtR2-5 mm Fn NoObst, UtL1-5 cm Fn NoObst, UtL2-5 mm Fn NoObst, Ut longitudinal septum 4 cm, CxR1 1 cm Fn NoObst, CxR2 1.5 cm Fn NoObst, CxL1 1 cm Fn NoObst, CxL2 1.5 cm Fn NoObst, VgR 9 cm NoObst, VgL 9 cm NoObst, Vg longitudinal septum.

We thank Dr Neha Agrawal for taking photographs in figures 1, 2, 4, and 5) and Dr Vibhav Manjrekar for figure 3.