Vaginal birth after caesarean section (VBAC) is well accepted with proper patient selection. Uterine rupture during VBAC is one of the most dreadful complications. Rupture can occur at a site away from that of previous scar. If there are no prominent signs and the rupture goes undetected, it may have catastrophic consequences. A high index of suspicion is of paramount importance. Fortunately , such cases of atypical uterine rupture are extremely rare. We present a case of atypical uterine rupture of the posterior uterine wall, incidentally detected during cesarean section for fetal distress.

Uterine rupture is a known complication of vaginal birth after cesarean section (VBAC) with a rate of 0.22-0.74%, with serious maternal and perinatal outcomes. It is conventionally believed to be due to compromised integrity of the scarred muscle. The incidence of rupture during VBAC is the lowest with spontaneous onset of labor as compared to induction or augmentation of labor. Prostaglandins used for cervical ripening  and oxytocin for induction and augmentation of labor increase the risk of uterine rupture by 2-3 fold. Uterine rupture in an unscarred uterus occurs in around once in 10,000 deliveries.[1] Atypical uterine rupture occurring at a site away from the previous scar is extremely rare.

A 25 year old second gravida with previous one LSCS with 40 weeks and 4 days gestation was admitted in early labor. The patient had regular antenatal visits in this pregnancy. Previous section was done in view of anhydramnios at a private hospital at term gestation 3 years ago. There was no other high risk factor. Patient did not give any other relevant history, nor was there documentation of any other obstetric intervention. Mode of delivery with risks and benefits associated with VBAC were discussed with her and the partner. They had opted for vaginal delivery. Ultrasonography had revealed an upper segment placenta. Liquor was adequate. Estimated baby weight was approximately 2.5 kg.
The patient had a normal labor progression and was fully dilated without oxytocin. However, after full dilatation of cervix for one hour, the patient developed fetal distress with late decelerations up to 80 beats per minute. Her vital parameters were stable. There was no scar tenderness. On vaginal examination os was fully dilated, fully effaced with vertex presentation, station was at 0 and had not receded, occiput was at 9 o’ clock, membranes were absent, liquor was clear. Decision for emergency LSCS in view of fetal distress in second stage of labor was taken.
Surgery commenced under spinal anesthesia. On laparotomy, a small amount of blood was noticed anterior to uterovesical peritoneum. Scar of previous LSCS was intact. Baby’s Apgar score at 1 min and 5 min was 9/10. Placenta and membranes were removed and the uterus was closed in situ. After closure, blood was seen pooling in the paracolic gutters. Hence the uterus was exteriorized and a posterior full thickness oblique uterine rupture of 6 cm in lower uterine segment was seen extending to the cervico-vaginal junction on the left side with active bleeding. The lacerated left uterine artery was seen bleeding. The rupture was repaired in one layer with polygalactic acid suture in continuous locking stitch. Left uterine artery was ligated and hemostasis was achieved. The ureters were traced and found to be away from sutures.
Estimated blood loss was 2800 ml. Intraoperatively 3 units of packed cells and 4 units of fresh frozen plasma were transfused. Intraperitoneal drain was placed and abdomen was closed after confirming hemostasis. Per speculum examination was done after the procedure to rule out any unnoticed vaginal extension of uterine tear. Anterior cervical lip was seen. Posterior lip was pulled up due to suturing. A centimeter long posterior vaginal wall laceration was noted away from the cervix, which was sutured. The patient was stable in the postoperative period. Later on further enquiry, she revealed history of dilatation and curettage for incomplete abortion 2 years before this pregnancy. She was discharged on day 7 with a 2.6 kg male child. 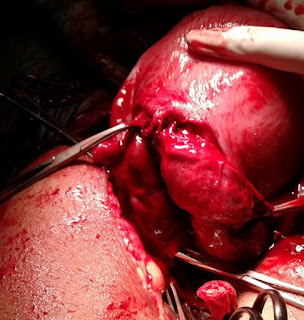 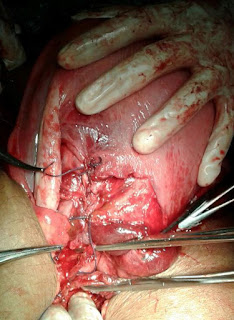 In a scarred uterus, the vast majority of uterine dehiscence and ruptures involve the previous uterine scar due to fibrosis and lack of elasticity. In some cases, the posterior wall of the uterus may be excessively stretched and thinned due to the rigid anterior uterine scar that prevents equal stretching, and may cause atypical uterine rupture of healthy tissue. The site of uterine rupture in such situations is unpredictable.[2] This is comparable to sacculation  in which a part of the posterior uterine wall softens and bulges like an aneurysm allowing growth of the fetus into the abdomen with increased risk of uterine rupture.
Prior unrecognized uterine perforation during dilatation and curettage or during insertion of IUCD, may magnify the risk for atypical uterine rupture especially in the setting of excessive uterine distension as myometrium is focally weakened. Previous curettage and myometrial injury were probably the cause of rupture in our case; however patient had not revealed history of curettage.
Factors which predispose to uterine rupture during VBAC are induction of labor, augmentation of labor, multiparity, uterine anomalies, endometritis, prolonged labor, incoordinate action, fetal malpresentation or malposition, very early repeat cesarean section (less than 2 years) and morbid adherence of placenta. [1]
In cases of posterior uterine rupture in patients of VBAC published between 1997 and 2007 [3–7]  a case of previous twin pregnancy was included.[7] It is possible that uterine hyperdistension predisposes weak thinned out musculature to atypical uterine rupture. Hawe et al and. Figueroa et al reported two cases of posterior uterine rupture with the use of prostaglandin for induction of labor.[3,5] However in our case there was no use of oxytocics or prostaglandins. Singhal et al and Majumdar et al attributed atypical uterine rupture to fetal malposition and malpresentation with prolonged labor.[6,7] Malposition may alter the distribution of the contractile forces in labor and may cause  dystocia; while certain malpresentations can cause incoordinate uterine action and obstruction, which may also precipitate atypical uterine rupture.[2]
The ﬁrst sign of posterior uterine rupture in our case was an abnormal cardiotocogram (CTG) with persistent fetal bradycardia and  arrest of labor; however there was no suspicion of rupture. CTG abnormalities are associated with 55–87% of uterine ruptures.[8] Other recognizable signs of uterine rupture include receding of the presenting part and inefficient contractility.[1] In our  case maternal vital parameters were stable despite massive uterine rupture, which may have been due to the presenting part compressing the rupture site and in turn acting as a temporary tamponade with active bleeding occurring only after delivery of the baby.