Mullerian anomalies form a spectrum of developmental anomalies of the female reproductive system ranging from lateral and vertical fusion defects to partial or complete absence of reproductive  structures embryologically derived from these. Here we present a case of agenesis of the upper vagina and cervix with bilateral rudimentary horns in a bicornuate uterus with a well differentiated and functioning endometrium causing endometriosis and cyclical pain. There was an asymptomatic Meckel’s diverticulum too. The diagnostic dilemma and management options  of such cases are discussed..

Mullerian anomalies of the female reproductive tract can range between 1 in 4000 to 10000. Meyer Rokitasky Kuster Hauser syndrome occurs in 1:4000 to 1:5000 women.[1] The diagnosis represents a challenge and clinical examination is the first step in arriving at a provisional diagnosis. The presentation is usually that of primary amenorrhoea, cryptomenorrhoea, dysmenorrhoea, chronic pelvic pain, dyspareunia and difficulty in sexual function. When there is absence or cervix and upper vagina there can be hematometra without hematocolpos. Meckel’s diverticulum occurs in 2% of population.[2]

An eighteen-year-old unmarried girl came to the outpatient department with a history of primary amenorrhea and cyclical lower abdominal and lower back pain on fixed days of the month for 2 years. The pain was of spasmodic nature, lasting for 6-7 days every month. She had no other gynecological complaints. She had attained thelarche at the age of 12 years and pubarche at the age of 13 years. She had no sister. Her mother had attained menarche at the age of 13 years. There was no history of tuberculosis, excessive weight gain, hirsutism, galactorrhoea or headache and blurring of vision and no history of bowel or bladder complaints. On examination she was moderately built and nourished. Her vital parameters were in normal limits. There was no thyroid enlargement. Breast development and secondary sexual characters were Tanner’s stage V. There was no galactorrhea. Hirsutism was not seen.  There were no skeletal anomalies. Her abdomen was soft and external genitalia were normal in appearance. There was a blind pouch of vagina of 1cm depth. Uterus was not palpable per rectally and no other pelvic masses were felt. A provisional diagnosis of mullerian agenesis was made. Her ultrasonography showed an absence of internal genital organs. The kidneys were normal. Magnetic resonance imaging showed two rudimentary uterine horns in both the adnexae with adjacent ovaries showing follicles within. Both horns showed well differentiated endometrium and myometrium. The right horn measured 2.2x1.3x2.4 and the left horn is 2.1x2.1x2.3. Cervix and upper vagina were absent. Her investigations for fitness for anesthesia showed normal results. A laparoscopy was done under general anesthesia. It showed bilateral rudimentary uterine horns each about 2x3x3 cm, right one larger than the left, with normal attached fallopian tubes and ovaries. Cervix was not visualized but a communicating fibrous ridge was seen between the two horns. Few endometriotic spots were seen over the peritoneum covering the pouch of Douglas and bilateral uterosacral ligaments and bladder peritoneum (figure 1). In view of laparoscopy findings showing pelvic endometriosis, bilateral hematometra in bilateral rudimentary horns with functioning endometrium and cervical agenesis a decision for made to excise the two horns of a bicornuate uterus. An exploratory laparotomy was done and excision of bilateral horns was carried out.  The ovaries and fallopian tubes being normal were left behind. Maeckel’s diverticulum was identified as an incidental finding (figure 2). A surgical reference was taken. As the diverticulum had a broad base it was left undisturbed. The postoperative course was uneventful and she was discharged on 5th postoperative day. In view of the presence of pelvic endometriosis, 3.75 mg leuprolide depot was given intramuscularly once a month for three months. She was asymptomatic for three months subsequently. 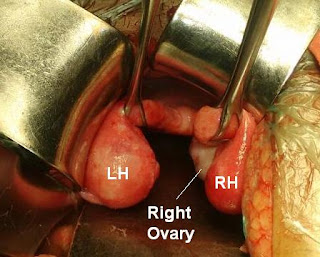 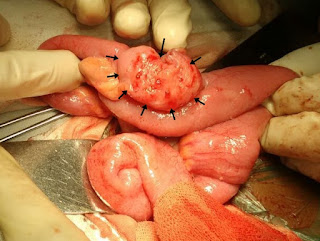 MRKH syndroe can be associated with anomalies of the urinary system and skeletal system.[3] Association with gastrointestinal anomalies is rare. Its association with Meckel’s diverticulum has not been reported so far.[4,5] The presence of Meckel’s diverticulum in our case was diagnosed incidentally. The patient had never been symptomatic for it.
The management of MRKH syndrome is creation of a neovagina when the patient is ready to be sexually active. If there is a functioning uterus, though rudimentary, the treatment cannot be delayed, as that can lead to endometriosis and its complications. If there is a functional cervix, the treatment is creation of a new vagina and anastomosis of the cervix to the apex of the new vagina. However, the absence of cervix makes this choice of treatment not desirable. Repeated efforts at creating a new cervical opening often fail, necessitating a hysterectomy at the end.[6,7]
In the case presented, there were two rudimentary uterine horns at the level of the pelvic brim. The cervix was absent, and the distance from the apex of a new vagina to great to be bridged despite mobilization of the horns. Hence a hysterectomy had to be performed. A vaginoplasty for permitting sexual function was planned at a later date .

Though conventional treatment of MRKH syndrome is creation of a new vagina for permitting sexual function, it needs to be modified if there is hematometra of the rudimentary iterine horns and pelvic endometriosis. Absence of functional cervix in the horns necessitates hysterectomy to prevent progressiveenlargement of hematometra and associated pain. One needs to look for not only urinary tract and skeletal anomalies, but also gastrointestinal anomalies, because only then one may be able to say with convition whether gastrointestinal anomalies are or are not associated with MRKS syndrome.
A case of primary amenorrhea when encountered needs complete and thorough evaluation keeping in mind functional and structural causes for it. A plan should be formulated after proper counseling of the patient and her relatives. A radiologist and a plastic/reconstructive surgeon should also be involved in the decision making process . renal and axial skeletal anomalies should always be looked for and kept in mind prior to performing any invasive procedure. The management of such conditions should be done with an individualized approach .