Previous laparoscopic myomectomy with use of a power morcellator is being identified as an important risk factor for development of parasitic leiomyomas. With increasing use of laparoscopy, the incidence of this rare complication is on the rise. We present a 28 year old nulliparous female who came 3 years after a laparoscopic myomectomy with a large left adnexal mass, mimicking a pedunculated exophytic uterine fibroid. On laparoscopy, however, a large parasitic mass was found in pouch of Douglas, separate from the uterus, along with many scattered masses all of which were carefully removed; histopathological examination confirmed leiomyomas.  This case report is presented to increase the awareness of this rare entity among laparoscopic surgeons which will allow them to take appropriate measures to prevent its occurrence.

Parasitic leiomyoma is a rare benign variant of uterine leiomyoma which has lost its connection to the uterus and is dependent on another organ or tissue for its main blood supply.[1] In recent years, there have been increasing reports of parasitic leiomyomas developing after laparoscopic hysterectomies and myomectomies involving the use of electric power morcellator, believed to arise from the small tissue fragments that are left behind after morcellation.[1-3] Literature on these ‘iatrogenic parasitic myomas’ is limited to case reports and few small case series. This case report is an attempt to further elaborate on the etiopathogenesis, clinical presentation, diagnosis and management of this rare complication and to contribute to the growing body of literature.

A 28 year old nulligravida, married since 5 years with history of primary infertility presented to the outpatient department with complaints of recent onset mild to moderate dull aching pain in lower abdomen. Her menstrual cycles were regular with average blood flow. There was no history of leucorrhea, fever, associated urinary or gastrointestinal complaints. Patient had undergone a laparoscopic myomectomy three years ago for a right lateral wall large intramural fibroid (8 x 6cm). Electric power morcellator was used to retrieve the fibroid and histopathology had confirmed benign leiomyoma. Post operatively, patient had an uneventful recovery.
General and systemic examination revealed no significant abnormality. Per abdomen and per speculum examination were within normal limits. On per vaginal examination, a firm mass with restricted mobility, approximately 6 cm in size was noted in the posterior and left fornix. On trans-abdominal ultrasonography, there was a 7 x 6 cm left adnexal lesion, predominantly hypoechoic with central cystic change. Findings were confirmed on transvaginal sonography (TVS) and a diagnosis of pedunculated exophytic uterine fibroid with central degenerative changes was made. No other masses or lesions were identified.
After obtaining informed written consent, laparoscopy was performed with three ports: one primary supra umbilical port (10mm) and two accessory 6 mm ports on left side. At laparoscopy, multiple masses (total seven in number) with sizes ranging from 1 to 5 cm, grossly resembling leiomyomas, were seen attached to the anterior abdominal wall (Figure 1A),  omentum (Figure 1B) and the peritoneal adhesion bands (Figure 1C and D). 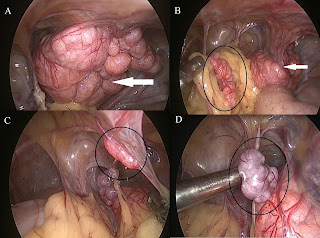 A large (approximately 6.5 cm) multilobulated mass was found in the pouch of Douglas, separate from the uterus and lateral to the left uterosacral ligament. The mass was firmly attached to the posterior leaf of broad ligament and was deriving its blood supply from left uterine artery (Figure 2A and B). Uterus appeared normal without any evidence of leiomyoma.

All the masses were carefully dissected off their respective attachments using bipolar electrocautery and scissors. Retrieval was achieved by morcellation of the masses in an endobag to avoid scattering of particles into the peritoneal cavity. Abdominal cavity was irrigated with around 3 liters of warm normal saline to ensure no particle was left behind. There were no intra/post operative complications. Diagnosis of parasitic leiomyoma was established after histopathologic confirmation. Patient was discharged on the third post operative day and is currently under treatment for infertility.

Parasitic leiomyomas were first described by Kelly and Cullen in 1909. They were thought to be spontaneously arising from pedunculated subserosal fibroids which have outgrown their uterine blood supply and have become dependent on other organs and tissues for nourishment.[3] In recent years, it is postulated that seeding of peritoneal cavity with multiple small fragments of uterine and/or myoma tissue during morcellation may lead to implantation of these fragments over abdomino-pelvic organs, omentum, peritoneum etc. which develop into parasitic myomas, also termed as ‘iatrogenic parasitic myomas’.[1-3] Molecular genetic analyses have also confirmed that these iatrogenic parasitic myomas originate from the same leiomyomas of the uterus that were resected at the primary surgery.[4]
The true incidence of iatrogenic parasitic myomas developing after laparoscopic morcellation procedures is unknown. Leren [5] has reported an incidence of 0.12%, whereas Cucinella[6] reported a prevalence of 0.9%. Many patients with iatrogenic parasitic myomas remain asymptomatic; others present with non specific symptoms such as abdominal pain, mass sensation, deep dyspareunia, abdominal distension.[1, 2] Depending on the site of occurrence, they may present with constipation, dyschezia (sigmoid colon); urinary frequency (bladder); or right lower quadrant pain (appendix).[3] Narsimhulu reported a case of torsion of an iatrogenic parasitic myoma presenting with acute abdomen.[7]  Dan reported a case of iatrogenic parasitic myoma presenting with generalized peritonitis and sepsis.[8] The only symptom attributable to parasitic fibroids in our patient was mild to moderate lower abdominal pain.
In the present case, the patient presented 3 years after the initial surgery. In various studies, the time interval between the initial laparoscopic surgery and the detection of parasitic myomas at second surgery ranges from 2- 108 months. This variability could be attributed to differences in circulating hormone levels and receptor status of the myomas which affect onset of clinical symptoms and potential growth patterns.[1, 2]
The location of iatrogenic parasitic myomas is variable, but are more commonly located in the pelvis which is the dependent part of the abdomen.[7] They are also found in various other sites such as port entry site in the anterior abdominal wall, peritoneum, omentum, bowel, mesentery, appendix, bladder, rectus abdominis muscle, or subcutaneous tissue.[1,2] These are also the sites where small fragments of tissue formed during morcellation are likely to lodge and be missed.
Because of their rarity and non specific symptoms, diagnosis of parasitic myomas is mostly incidental at the time of surgery for other indications.[3] Ultrasonography is a useful imaging modality for diagnosis. Trans-vaginal ultrasonography (TVS) is of great help in case of parasitic myomas in the cul de sac and broad ligament, as it permits clear visual distinction between the mass and the uterus and ovaries. In our case, however, TVS could not identify the myoma separately, probably due to a low index of suspicion. MRI seems particularly valuable in the diagnosis of parasitic myomas due to its superb contrast resolution and multiplanar capabilities and hence should be done in cases with high index of suspicion. [9]
Dilemmas exist regarding the treatment of iatrogenic parasitic myomas. According to few authors, surgical treatment is mandatory in symptomatic cases, in cases with progressive growth of lesions and asymptomatic myomas identified incidentally during surgical procedures for other indications.[6] However, there have been reports of parasitic myomas requiring extensive and complicated surgeries, especially where they are firmly attached to bowel or mesentery leading to intestinal perforation.[5, 8] Medical treatment in the form of intramuscular gonadotropin releasing hormone has been tried by Kumar et al. which relieved symptoms but was not effective in reducing the size of the parasitic myoma.[10] Thus, further research is necessary to determine the optimum line of management of iatrogenic parasitic myomas.
For prevention of this rare complication of tissue morcellation during laparoscopic surgeries, several authors insist on identification and complete removal of all tissue fragments from the abdomino-pelvic cavity, altering the patient position from Trendelenburg to reverse Trendelenburg and copious irrigation of abdomen and pelvis with normal saline.[2-8] Morcellating the tissue in an endobag should be considered as this may prevent the scattering of small fragments.[7] In the present case too, morcellation was carried out in an endobag followed by irrigation of abdominopelvic cavity to ensure that no fragment was left behind.

The present case reinforces the belief that prior laparoscopic uterine surgery with tissue morcellation using power morcellator is a risk factor for development of parasitic myomas. Clinicians should be aware of this entity and all measures necessary to prevent this rare complication must be taken during initial surgery.