Ewing’s sarcoma is a primary malignancy of the flat bones and truncal skeleton affecting young adults. Very few cases of Ewing’s sarcoma in a pregnant patient have been reported so far and hence the data regarding its management during pregnancy is limited. Here we report a rare case of extra skeletal Ewing’s sarcoma of the chest wall detected in the third trimester of pregnancy.

As compared to the past; incidence of cancer during pregnancy is increasing. This may be due to the current trend of postponement of pregnancy to later life. Most common cancer diagnosed in pregnancy at present is breast cancer followed by ovarian and cervical carcinoma.[1] Bone and soft tissue sarcomas are rare and present infrequently during pregnancy.[2]
Ewing’s sarcoma is a part of Primitive Neuro Ectodermal Tumors (PNET) that arises mainly from bones or rarely from soft tissues. All Primitive Neuro Ectodermal Tumors together constitute the Ewing’s sarcoma family of tumors. Ewing’s sarcoma usually arises from the diaphysis of long flat bones affecting young adults and children in their second or third decades. Extra skeletal Ewing’s sarcoma though rare is found to arise from the chest wall which is known as the Askin’s tumor. Other sites affected are para-vertebral muscles, retro-peritoneal space, extremities and buttocks.[3]

A 24 year old G2P1L1 was referred to our tertiary care center from the nearest oncology center at 30.3 weeks of gestation with a diagnosis of thoracic wall Ewing’s sarcoma for delivery of the fetus in order to start early chemotherapy. She had complaints of right sided chest pain, breathlessness, cough and fever on and off since 2 months for which she had consulted a nearby private physician. On evaluation ultrasound of chest was done which was suggestive of a 16x12 cm size complex mass in the right thoracic cavity separate from the lung and part of it was seen attached to the pleura.
Trucut needle biopsy of chest wall mass showed small round blue sarcoma cells with positive immunostaining for CD99 suggestive of peripheral primitive neuro ectodermal tumor/ Askin’s tumor. Magnetic resonance imaging of chest, abdomen and pelvis was done which was suggestive of a large 14.5x11.7x23.1 cm heterogeneous hemorrhagic solid/ cystic mass in right hemithorax with collapse of the underlying lung and mediastinal shift to the left along with a gravid uterus. Her chest radiograph showed complete opacification of the right hemithorax, with mediastinal shift. And abrupt cut off of the right bronchus was also seen.( Figure 1). Hence the she was referred to a specialized oncology center for further management.
The oncologist referred her to our tertiary care center for urgent delivery of the fetus as the tumor was of an aggressive nature. They planned to give chemotherapy followed by radiation or surgery. Routine antenatal workup was done. On admission her general condition was fair, pulse was 100 beats/ minute, blood pressure was 110/70 mm of Hg, both heart sounds were normal and on auscultation of the chest air entry was reduced on the right side. On inspection the chest skin had edema and dilated veins were seen on the right side of the chest. Tenderness was elicited on palpation. Pallor was present. On obstetric examination the uterus was corresponding to 30 weeks of gestation,  live fetus in longitudinal lie with vertex presentation was felt and on per vaginum examination the bishop’s score was favorable for induction. She was diagnosed to have severe anemia. Her hemoglobin was 6 gm % and hence 2 units of packed cell volume were transfused. Antenatal steroids for fetal lung maturation were given.
Her hemoglobin then increased to 7.8 g/dL, total leucocyte count was 12,600/ cmm and platelet count was 1.75 lac/cmm, liver and renal function tests and coagulation studies were normal. One more unit of packed cell volume was transfused. Dinoprostone gel 0.5 mg was then instilled in the cervix to further ripen the cervix so as to allow induction of labor to be done.
She delivered a female child of 1.470 kg with a 5 minute APGAR score of 9/10. Baby was kept in neonatal intensive care unit in view of low birth weight and discharged on day 15 of birth after adequate weight gain. She was transferred back on the second day post delivery to the specialized oncology center for further management. There she was given 2 cycles of chemotherapy, vincristine, adriamycin, cyclophosphamide (VAC). On day 12 post delivery her condition started deteriorating. She had an episode of generalized tonic clonic convulsion and was then shifted to the intensive care unit. Her plain CT scan of the brain that was done was normal. A contrast CT scan of the thorax and the abdomen showed a  large  mass occupying the entire right hemithorax with extension into the mediastinum and involvement of the lower intercostal spaces with complete collapse of the underlying lung. A cm sized sub solid nodule in the lateral basal segment of left lower lobe, of indeterminate significance was seen. Left renal vein thrombus extending into the inferior vena cava (IVC) and gonadal vein with decreased left renal function suggestive of a bland thrombus was reported. Thrombus was also seen in internal jugular vein (IJV). Ascites was present. Later her condition further deteriorated and hence further radiotherapy and chemotherapy was deferred. She was on ventilatory support and later on ionotropic support, but she succumbed due to cardiac arrest on day 38 postpartum. 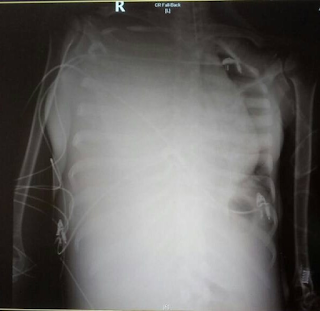 Complete opacification of the right hemithorax, with mediastinal shift due to the lung mass with effusion.

Various studies and literature show that the incidence of cancer during pregnancy is as low as 0.07-0.1 %.[4] But there are certain tumors that show an accelerated growth during pregnancy such as Ewing’s sarcoma, malignant melanoma, meningiomas, malignant fibrous histiocytoma, osteosarcoma,leiomyomatosis peritonealis disseminata, anaplastic mesenchymal chondrosarcoma,  dermatofibrosarcoma protuberans, high-grade synovial sarcoma, aggressive angiomyxoma, and liposarcoma.[5] The hormonal, physiological and the mechanical changes that occur during or after pregnancy induce or accelerate the growth of tumors and their spread.
Literature also suggests that at times few tumors in the pelvic region might as well occupy the space of the enlarging uterus or the fetus, such as pubic osteosarcoma or Ewing’s sarcoma or may even spread to placenta and fetus in extremely rare instances.[1]
The Ewing’s family of tumors is a rare group of bone and soft tissue tumors with a prevalence of 1.9 per million. These tumors have a rapid growth and frequent distant metastases and individuals present with chief complaints of persistent pain and a palpable mass later on. Askin’s tumor is highly aggressive with a tendency to spread into the thorax anteriorly, spinal area posteriorly and also into the retroperitoneal region. It can also cause rib destruction. Ewing’s tumor is highly chemo sensitive and hence treatment of choice is chemotherapy, but sometimes radiotherapy is also given. In pregnancy chemotherapy and radiotherapy given in the first trimester have an increased risk of fetal congenital malformations, intrauterine growth retardation or intrauterine fetal death. When chemotherapy is administered in the second trimester maternal survival is much better than delaying the treatment to post delivery. However, in our case the referral note of the oncologist mentioned the need to deliver the patient as the tumor was very aggressive and deferring delivery the tumor would remain aggressive and not respond very well. They planned to repeat PET CT after induction of chemotherapy (VAC) and were also considering local therapy (surgery followed by radiotherapy or radiotherapy alone if the mass was non resectable). The oncologist felt that deferring definitive treatment would worsen her prognosis. The CT scan that was eventually done pre chemotherapy and post 2 cycles of chemotherapy had shown no change in the size of the tumor.
As per the available literature, the modality of treatment is decided on the basis of a multidisciplinary approach, considering both mother and fetus, avoiding excessive toxicity to the fetus with adequate treatment to the mother.