Tubo-ovarain masses can arise from congenital malformations, infections or tumors. In the reproductive age group, tubo-ovarian abscesses are usually a complication of pelvic inflammatory disease (PID). The incidence of PID in the age group of 15-39 years is 10-13% with a peak of 20% in the 20-24 years age group.[2] One third of the patients with PID may develop a tubo-ovarian abscess.[3]

A 20 year old unmarried girl with history of surgery for bladder outlet obstruction in neonatal period presented with complaints of acute onset lower abdominal pain. Pain was persistent, gradually increasing in intensity over one month but was not associated with menstruation. There were no menstrual complaints. There was occasional history of vaginal white discharge. There was no history of fever or urinary complaints. On examination midline scar of previous surgery was seen and vague minimal tenderness and an ill defined mass was felt in the lower abdomen. Ultrasonography (USG) revealed two right ovarian complex cysts measuring 7.6 x 5.2 cm and another of 4.3 x 3.1 cm. Both cysts showed dense internal echoes without septations or mural nodules. Vascularity was preserved. Bladder showed mild diffuse thickening of its walls with no vesical calculus or mass. Provisional diagnosis on USG was endometriotic cyst.
She was also recently diagnosed as being HbsAg positive and she was not on any treatment for the same. She had no history of jaundice or blood transfusions. There was no history of pulmonary tuberculosis in the past or history of Koch’s contact. X-Ray chest was done which was normal. All laboratory investigations and tumor markers were done which were within the normal range.
She underwent exploratory laparotomy. Intraoperatively adhesions were noted in the pelvis extending from the uterus to the anterior abdominal wall and lateral pelvic walls. Uterus visualized after adhesiolysis was normal in size and shape. The right adnexa showed 4x5 cm thick walled ovarian cyst containing caseous material with fallopian tube was stretched across it. Cystectomy was done and specimen was sent for histopathology. Caseous fluid that was aspirated was sent for MGIT (mycobacterium growth inference tube), and aerobic culture and sensitivity, GeneXpert, AFB (acid fast bacilli) smear and staining, cytology and for TB-PCR. Cyst wall and a full thickness ovarian biopsy was sent for histopathology. No tubercles were seen in the pelvis. No endometriotic spots were seen. Left ovary was normal though left tube also had caseous collection. Bowel and upper abdomen was normal. Ovarian reconstruction was done and the abdomen was closed in layers. Postoperatively she recovered well and had no complaints. GeneXpert was negative for mycobacterium tuberculosis, on TB-PCR there was no mycobacterium genus detected, AFB staining was negative and culture sensitivity showed no growth. Histopathology of the cyst wall showed dense lymphocytic infiltration. Though all tests for tuberculosis were negative first line antikochs drugs (AKT) were started in view of intraoperative findings and the histopathology finding of dense lymphocytic infiltration. 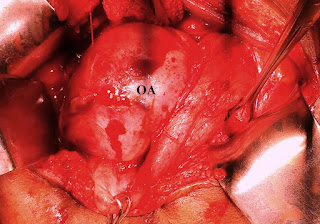 Figure 1. Ovarian Abscess (OA). Babcock’s forceps are holding the round ligament and the ipsilateral fallopian tube.

Figure 2. Aspiration of the ovarian abscess. Syringe has the aspirated caseous material. 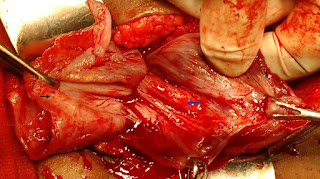 Tubo ovarian masses comprises a broad spectrum of masses right from pelvic endometriosis, hydrosalpinx, hemorrhagic cysts, hematomas, malignancies to complex diverticular abscesses or appendicular masses. The clinical signs and imaging may not be definitive to diagnose the etiology and many times the diagnosis is done with intra-operative findings and histopathology.
A tubo-ovarian abscess usually arises from local spread of ascending infection affecting the upper genital and adjacent pelvic organs or rarely hematogenous spread. The risk factors for a tubo-ovarian abscess are history of PID, multiple sexual partners and age between 15 and 40 years.[2] In the study conducted by Habboub, 20% of patients were adolescent or young adults, 18% were not sexually active and 11% patients had recent pelvic surgery/intervention.[4] Rarely  in unmarried girls they occur as a result of blood borne or genitourinary infection or may mimic ovarian tumors.[5,6] Other causes reported are manifestations of Crohn’s disease, recurrent urinary tract infection,[7] or infection by rare organisms.[1] Up to 95% of cases present with abdominal pain, while other complaints are palpable adnexal mass, cervical motion tenderness, fevers or vaginal discharge.[4] Our patient only had abdominal pain with no overt signs or symptoms of abdominal abscess.

In India the prevalence of genital tuberculosis in female population is nearly 12-20 % and in 20 % of these cases ovaries are affected.[8] Thus many of the inflammatory conditions affecting the ovaries, fallopian tubes and endometrium can be attributed to tuberculosis.
Although definitive diagnosis of genital tuberculosis requires definitive histopathological confirmation but this can be proven in only 11% of cases. Hence RNTCP Guidelines 2016 allows use of other less sensitive tests or high clinical suspicion for provisional diagnosis and starting treatment of genital TB.[9] The tests suggested are AFB staining, culture, PCR and histopathology. All of these are 100% specific however their sensitivity is 24%, 48%, 87% and 88% respectively. AFB staining has also a high false negative rate of 75% followed by 51% for culture and 12 % for PCR.[10] Thus in our case though the histopathological diagnosis and other tests were not confirmatory, we started AKT due to high clinical suspicion.
Hence in a high prevalence setting like India, a tubo-ovarian mass occurring in a sexually naive girl should generate a high degree of suspicion for genital tuberculosis.

One of the most common diseases affecting the genital tract in a high prevalence region like India is genitourinary tuberculosis. Sensitivity of diagnostic tests available limit the diagnosis of this condition. However id there is high clinical suspicion, signs and symptoms and clinical findings suggestive of tuberculosis, treatment should not be delayed for the same.