Most of the primary ovarian abscesses are unexpected findings at laparotomy for tuboovarian mass or endometrioma. Clinical signs and symptoms of ovarian abscess are nonspecific and tubal involvement cannot be ruled out. Our case was detected on pelvic ultrasonography during investigation for recurrent fever when all other causes were ruled out. Neither microscopy nor culture showed microorganisms. TB PCR was negative.

Primary sterile ovarian abscess is a rare phenomenon. Clinical presentation ranges from asymptomatic abscess to diffuse peritonitis. The longer the delay in operative treatment, greater is the morbidity and mortality. Modern imaging modalities including ultrasound (USG) and magnetic resonance imaging (MRI) may help in making an early diagnosis. We describe an interesting case of a 36 year old parous woman with low grade fever and occasional pain in abdomen with ovarian abscess.

A 36 year old woman came to medicine OPD with complains of fever since 15 days, with occasional pain in abdomen. There were no complaints of menstrual irregularities, dysmenorrhea and vaginal discharge. There were no bowel and bladder complaints. She had no history suggestive of past medical or surgical illnesses. She had one cesarean section. She did not report any contraception use. Her vital parameters were normal except for low grade fever. There were no specific abdominal signs.  Empirical treatment with antimalarials and broad spectrum antibiotics was given.  Complete blood count was suggestive of neutrophilic leucocytosis. Investigations including malarial antigen, leptospirosis and dengue antigen antibody tests, Widal and urine culture were negative. Abdominopelvic sonography done for abdominal pain was suggestive of left hemorrhagic ovarian cyst with pyosalpinx. She was referred to gynecology department. On abdominal examination there was no guarding tenderness and rigidity, a soft cystic mass could be palpated. On vaginal examination mass of about 8 cms in diameter was palpated posterolateral to the uterus on the right side. The uterus was normal in size. Computerized tomography scan (CT scan) showed cystic lesion in the pouch of Douglas of size 9x8 cm arising from the right ovary and causing mild ipsilateral hydro ureter, and hydronephrosis due to mass effect. The ipsilateral fallopian tube and contralateral tube and ovary were normal. There was no lymphadenopathy or ascites. In her tumor markers alfa feto protein was 1.03 ng/ml, carcinoembryogenic antigen was 0.83 ng/ml, LDH was 146 U/L and CA125 was 87.0 U/ml. She underwent exploratory laparotomy. Intraoperative findings showed a cystic thick walled ovarian mass of 10x12 cm on the right side adherent to the rectosigmoid and posterior wall of the uterus, obliterating the pouch of Douglas. Right fallopian tube was normal in caliber. Left fallopian tube and ovary were normal. The ovarian mass was separated from rectosigmoid and posterior wall of uterus by blunt and sharp dissection and oophorectomy was done.  Intraabdominal drain in pelvis was kept due to oozing. Postoperatively patient received one unit of blood. Postoperative  course was uneventful. Drain was removed on day 3 after surgery. Aspirated pus was sent for culture and TB PCR which came out to be negative. The culture was negative for microorganisms after 48 hours. Microscopy showed pus cells with no organisms or granulomas.  She was discharged on the 6th postoperative day. Sutures were removed on day 14 and the wound was healthy. 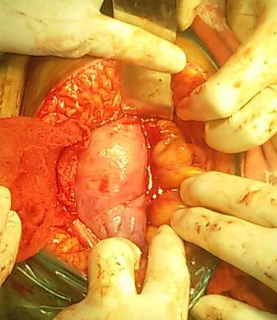 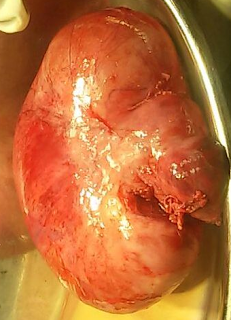 Ovarian abscess was first described by Aitken in 1869. Since then various cases of such abscesses have been documented.
It is classified as
• Primary abscess occurs due to disruption of ovarian capsule, which is seen in ovulation or surgical intervention, which gives bacteria access to ovarian stroma. It can also occur due to hematogenus and lymphatic spread.
• Secondary abscess occurs due to spread of infection from surrounding structures. It may be associated with tuboovarian abscess, salpingitis, pelvic inflammatory disease or Gastro intestinal (GI) infections (diverticulitis and appendicitis).[1]

Ovarian abscesses are rare and for this reason their etiology remains poorly understood.
Wetchler and Dunn [2] considered three possibilities to explain infection of the ovary.
1. The entry of bacteria into the parenchyma when the ovarian capsule is punctured.
2. Contamination via the blood stream.
3. Contamination via the lymphatic system.

The most common mechanism is considered to be breach or alteration of the ovarian capsule at the time of ovulation, or by penetration during surgery or surgical procedures. The type of bacterium, its virulence, number of bacteria inoculated, spread through devitalized tissue and whether the infection occurred secondary to direct contamination at surgery, determines the clinical presentation, its severity and time of presentation (early or late). This complication has been reported to occur after vaginal hysterectomy, ovarian cystectomy, and cesarean section. Furthermore, transvaginal or percutaneous needle aspiration of an endometrioma have been considered in the causation of this rare phenomenon.[3] Ultrasonically guided vaginal oocyte collection is also a cause for ovarian abscess.[4] In our case the etiology of primary ovarian abscess remains unknown, it is possible that lymphatic spread occurred from some infective focus that was responsible for fever with which the patient presented. It is plausible that broad spectrum antibiotics sterilized the pus.
Primary ovarian abscess is mainly caused by organisms like salmonella, tuberculosis and actinomycoses Israeli which is associated with intrauterine contraceptive device users.[5,6] In our case aspirated pus was sent for culture and TB PCR which came out to be negative. TB PCR is considered to have high sensitivity.[7] There was neutrophilic infiltrate as shown in the photograph and the patient had neutrophilic leucocytosis, hence tuberculosis was ruled out. Hence tests like Mycobacteria growth indicator tube (MGIT), smear for AFB, Gene Xpert investigations were not done. In our case patient received broad spectrum antibiotics for seven days which probably sterilized the pus.
Diagnosis of unruptured primary ovarian abscess is difficult because of variable clinical presentation and may remain silent before it causes pelvic pain, fever, pelvic tenderness or mass. Ultrasound at times can miss an ovarian abscess. MRI and CT scan may be helpful for confirmation of diagnosis
Treatment is surgical with unilateral salpingooophorectomy or oophorectomy may be performed under broad spectrum antibiotic coverage followed by specific antibiotics according to culture report.[8]  In this case, oophorectomy was done.  If the ovarian abscess ruptures, the clinical picture is much the same as that of a rupture of tubo-ovarian abscess, with abdominal distension, tachycardia, rebound tenderness, ileus and sometimes septic shock which may increase morbidity and mortality.

The prognosis after surgical management of a large unruptured primary ovarian abscess is good. In absence of tubal involvement, oophorectomy should be done.