A cesarean scar ectopic pregnancy, albeit a rare finding, has a rising incidence, due to increasing cesarean and repeat cesarean delivery rates. In addition to this, the diagnosis is often difficult, and a missed diagnosis may lead to major complications, including severe hemorrhage, uterine rupture and hysterectomy.

A cesarean scar ectopic pregnancy refers to implantation of the gestational sac within the myometrium of a previous cesarean delivery scar. There are various theories for explaining its occurrence, but the most plausible one seems to be that the blastocyst enters into the myometrium through a microscopic dehiscent tract, created through the trauma of cesarean section.[1] The incidence ranges at about 1:1800 to 1:2216 normal pregnancies. The mean gestational age at diagnosis is 7.5 ± 2.5 weeks, and the most frequent symptom is painless vaginal bleeding.[2] We present a case which complied with the above mentioned diagnostic symptom, but in which the diagnosis was missed, leading to complications of uterine rupture and formation of an organized hematoma in the pelvis containing fetal parts. The patient eventually required a hysterectomy.

A 27-year-old woman, married for 4 years, with previous 1 lower segment cesarean section done 1 year ago, came with complaints of pain in abdomen and bleeding per vaginum for 1 month. The pain in abdomen was continuous in nature, more in the right lower abdomen.
The patient has no other significant medical or surgical history, no bowel or bladder complaints, no complaints of hematuria. The patient’s last menstrual period was on 13th February, 2017.
When she did not get menses in March, she did a urine pregnancy test (UPT) at home, which was positive. The patient gave a history of taking oral combination contraceptive pills regularly prior to that pregnancy, in spite of which she had conceived. She consumed MTP pills (mifepristone followed by misoprostol), procured without a check-up from a local private clinic on 18th March 2017. She started bleeding per vaginum and getting pain in abdomen from beginning of April. An emergency check curettage was done at a private hospital on 17th April 2017. Ultrasonography (USG) was not done prior to the procedure. Her complaints of pain in abdomen and bleeding per vaginum persisted after the curettage. UPT done in early May was positive, and repeat check curettage was done on 20th May 2017. Vaginal bleeding and pain in the right lower abdomen persisted post procedure. The patient got a USG done which was suggestive of uterine dehiscence with macerated fetal parts with a collection/hematoma in the abdominal cavity with hemoperitoneum. The uterus was bulky,11.2 x 6.5x 4.2 cm with a breach in the anterior myometrium of the uterus at the scar site with hypoechoic heterogeneous collection of 10.9 x 4.7 cm with fetal spine and limbs seen within it extending to the right adnexa. At that time she presented to our hospital. On examination her general condition was fair, and vital parameters normal. Abdominal examination showed tenderness in the right iliac fossa. On vaginal examination, a 10 x 12 cm tender mass was felt in the right fornix. The uterus was bulky and the cervical os was closed. Mild bleeding was seen from the os. Her hemoglobin was 8.8, total leucocyte count 11700/cmm. Coagulation profile was normal. Intravenous administration of amoxy-clav, gentamycin and metronidazole was started. One unit of packed cell transfusion was given, and then the patient was taken up for an emergency exploration with consent for obstetric hysterectomy if required.

Intraoperatively, a foul-smelling mass of 10 x 8 cm with a long limb bone and spine of the fetus was seen over the right anterolateral part of the uterus and right adnexa, with omentum and cecum adherent over it. The hematoma and mass with fetal parts was evacuated, and sent for culture sensitivity and histopathology. Uterine rent of approximately 3 cm was seen over the right anterolateral wall of the uterus, with necrotic thick fibrosed edges. A necrotic mass was seen at base of the cecum. Bowel and omentum were separated by the general surgeons’ team. Rest of the bowel was normal. Left anterior surface of uterus was adherent to the anterior abdominal wall, which was separated by sharp dissection. Adhesions between anterior uterine wall and posterior wall of bladder were present. Bladder was pushed down slightly, but could not be separated further due to adhesions. Subtotal obstetric hysterectomy was done. Part of the rent in the lower segment that could not be removed with the specimen was sutured by figure of 8 stitches with vicryl no 0. There was no evidence of any injury to or leak from the bladder or the ureters. Intraoperative estimated blood loss was 2.3 liters. Intraoperatively, 2 units blood and 2 units fresh frozen plasma were transfused. An intraperitoneal drain was kept in the pouch of Douglas, which was removed on the 5th postoperative day. Postoperatively, the patient was vitally stable, and received 3 units of blood transfusion. The specimen sent for culture, grew E coli sensitive to gentamycin. She was given injectable gentamycin for a total of 7 days. She made an uneventful recovery. A computerized tomography (CT) was done prior to discharge from the hospital. It confirmed that intraabdominal structures were normal and no fetal parts were left behind. Histopathology of the hysterectomy specimen confirmed the diagnosis of cesarean scar ectopic pregnancy. 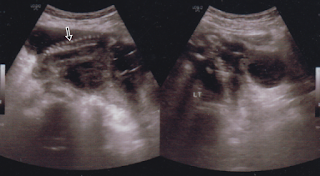 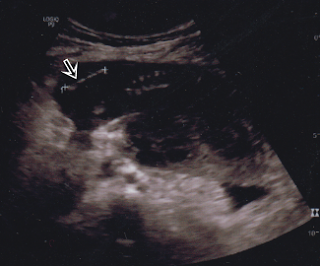 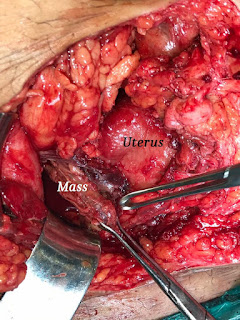 Figure 3. Operative findings: a mass is seen anterior and to the right of the uterus.

A cesarean scar pregnancy may be misdiagnosed as a threatened abortion; or incomplete abortion, as in this case. Differentiating features include a greater volume of bleeding in an abortion, and cramp like abdominal pain.[3] Transvaginal USG is the first line tool for diagnosis of a cesarean scar ectopic pregnancy. Magnetic resonance imaging should be done if the USG results are equivocal or inconclusive.[4] Sonographic criteria include an empty uterus, empty cervical canal, development of the gestational sac in the anterior part of the lower uterine segment or uterine isthmus and an absence of healthy myometrium or presence of thinned out myometrium between the bladder wall and the gestational sac.[5] Additional criteria are presence of placenta or gestational sac embedded in the uterine scar, a triangular (< 8 weeks) or rounded or oval (> 8 weeks) gestational sac that fills the niche of the scar, a closed and empty cervical canal, the presence of a prominent or rich vascular pattern at or in the area of the scar in the presence of a positive pregnancy test.[6]
Treatment guidelines are lacking. Hysterectomy is the first line of management in patients not wishing to preserve fertility, or with heavy uncontrolled bleeding. For patients wishing to preserve fertility, systemic or locally injected methotrexate is used; or procedures such as visually guided suction curettage or transvaginal aspiration, hysteroscopic removal or isthmic resection are done. Medical and surgical options may be carried out in conjugation with each other or alone. Uterine artery embolization may also be done with any of the above procedures.[4] Some believe that USG-guided methotrexate injection is the treatment of choice to terminate cesarean scar pregnancy.[3]
The case presented was intriguing. The patient took MTP pills without a check-up and prescription, which could have resulted in the rupture of the cesarean scar ectopic pregnancy. It is possible that there was not disruption of the site of implantation sufficient to cause fetal demise, so that it continued to grow. It is also possible that the scar gave way with the use of the drugs, and the pregnancy got extruded through the rent and continued to grow in the disrupted scar. The curettage that was done subsequently was not preceded by an USG. Hence the diagnosis was missed. It appears that it missed the scar ectopic pregnancy too, and the fetus continued to grow. The second curettage was also done without a prior USG. In case repeated curettages are required, it is essential that one obtains a pelvic USG first, so that unusual conditions like a scar ectopic pregnancy are not missed. It is probable that removal of most of the fetus was done at this time, so that only the fetal vertebral column and a long limb bone were left behind. An infection was inevitable due to repeated surgeries and incomplete removal of the products of conception. The size of the fetal spine and the limb bone were suggestive of a fetal age of about 10-12 weeks. That fits the probable clinical course described.
A differential diagnosis is that there could have been a uterine perforation during the curettage, following which the pregnancy grew outside the uterine cavity, with or without secondary implantation. A third possibility is that the patient may have mistaken dates, and a late first or early second trimester suction curettage resulted in uterine perforation, with an incomplete curettage and partial extrusion of the foetal parts through the defect in the uterine wall. The incidence of uterine perforations during elective first trimester abortions is 0.08%. [7] The foetal spine and limb bones were found, which indicates that the gestational age of the fetus would have been at least 10-12 weeks. [8]
This incident cannot emphasize enough the need for routine USG before medical or surgical MTP to make the procedure safer for the woman.

We thank Dr Durga Valvi for performing the operation.