An Unusual Case Of Placenta Increta

Morbidly adherent placenta (MAP) is a terminology given to placenta accreta, increta or percreta wherein there is partial or complete invasion of the uterine myometrium by placental tissue. It is of clinical significance as it can lead to antenatal, intrapartum or postpartum hemorrhage leading to massive blood transfusion and obstetric hysterectomies. The incidence of maternal morbidity and mortality also increases in these cases. Higher suspicion of MAP should be held in cases of previous cesarean sections, myomectomies, uterine curettage when dealing with in subsequent pregnancies. We present a case of placenta increta in a previous case of cesarean section with the adherent placenta found at a site away from the cesarean scar.

Morbidly adherent placenta is a potentially life threatening obstetric condition that requires multidisciplinary approach for its management. MAP is an abnormal invasion of the uterine myometrium by placental tissue. It is called as accreta, increta or percreta when the placenta is adherent to the myometrium, when it has invaded the myometrium but not the uterine serosa, and when it has invated the serosa respectively.[1] Antenatal ultrasonography (USG) can be used to establish the diagnosis and guide clinical management.[2]Here, we present a case of placenta increta in a previous cesarean section at a site away from the cesarean scar area leading to postpartum hemorrhage and eventually emergency obstetric hysterectomy.
Case Report

A 42 year old woman gravida 3 para 1 abortion 1 with term gestation presented to us in early labor. She had one previous lower segment cesarean section done 3 years ago in view of breech presentation and one check curettage done one year ago in view of an incomplete abortion. She gave no history of any complication during either of the procedures. She was diagnosed with gestational hypertension 15 days ago and started on oral Labetalol 100 mg thrice daily. She had no other medical or surgical history. All investigations for fitness for anesthesia were within normal limits. On USG, placenta was posterior. She was given trial of vaginal birth after due consent. She progressed spontaneously and delivered by outlet forceps due to fetal distress in the second stage of labor. The placenta did not separate spontaneously. On abdominal palpation, uterus was contracted. On vaginal examination, signs of placental separation were not seen. The patient was shifted to the operation theater. Manual removal of placenta was attempted but about 5 cm of placental area was found to be adherent to the left upper anterior uterine wall and no plane of separation could be found. Placenta was not adherent to the previous cesarean scar site. Bleeding from the os continued and local causes of bleeding were ruled out. Decision for exploratory laparotomy and obstetric hysterectomy was taken. During laparotomy omentum was found to be adherent to the uterus on the left fundolateral region (figure 1). A subtotal hysterectomy was done. Intraoperatively, the patient received 2 units of packed cells. On opening the uterus, the placenta was found to have separated from its bed from all sites except an area of 5 cm in diameter in the left fundolateral region corresponding to the omental adhesions on the exterior of the uterus (figure 2). Postoperative recovery was uneventful. Histopathology report confirmed it to be placenta increta. 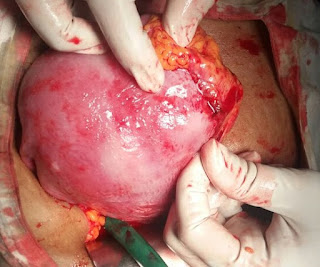 Figure 1. Omental adhesion to the uterus. 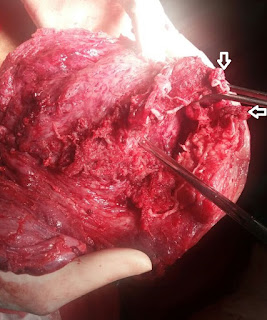 MAP is a life-threatening complication of pregnancy characterized by complete or partial absence of the decidua basalis and imperfect development of the Nitabuch layer. Placenta accreta is the abnormality of placental implantation in which the anchoring placental villi attach to myometrium rather than decidua, resulting in a morbidly adherent placenta leading to difficult separation and hemorrhage. Placenta increta (chorionic villi penetrate into the myometrium) and placenta percreta (chorionic villi penetrate through the myometrium to the uterine serosa or adjacent organs) are severe abnormalities of placental implantation. More the number of previous cesarean deliveries, more is the risk of developing MAP. Risk factors other than a previous cesarean include submucous myoma, previous curettage, Asherman's syndrome, advanced maternal age, grand multiparity, smoking and chronic hypertension.[3] The manifestations such as bleeding, uterine rupture, invasion of the bladder and uterine inversion depend on the site of implantation, depth of myometrial penetration and the extent of abnormally adherent placenta.[4]Placenta accreta and increta usually present as hemorrhage during difficult placental removal. It may also complicate early pregnancy causing hemorrhage.[5] Most cases of placenta accreta and increta have no preceding symptoms; a higher degree of suspicion based on history is essential for making an early diagnosis .

USG in prenatal diagnosis of an asymptomatic placenta increta is useful but its accuracy is uncertain. USG findings of MAP are loss of placental homogenecity, presence of multiple intraplacental lakes adjacent to the involved myometrium, retroplacental myometrial thinning (<1 mm), disruption of the continuous white line representing the bladder wall-uterine serosa interface, bulging of the placenta into the posterior wall of the bladder and exophytic mass breaking through the uterine serosa, usually extending into the bladder.[6] It has a positive predictive value of 78% and a negative predictive value of 94% as cited by Finberg et al.[7] Others suggested that USG may detect only 33% of cases of placenta accreta/increta.[8] This could be the reason in this case for missing the diagnosis. Magnetic resonance imaging (MRI) has also been proposed as a diagnostic tool, but no additional advantage has been found over USG.[9] MRI diagnosis is based on findings of uterine bulging into the bladder, heterogeneous signal intensity within the placenta, presence of intraplacental bands on the T2W imaging, abnormal placental vascularity and focal interruption of the myometrium.[10]
As USG mentioned a posterior uterine wall placenta in our case, further evaluation with MRI was not done as the degree of suspicion of MAP with regards to the cesarean scar was low. This woman was screened negative for adherent placenta antenatally, but unexpected adherent placenta was noted at a site away from the previous scar after delivery. This highlights the need to consider other causes of adherent placenta. She had a history of previous uterine curettage which is also a risk factor for adherent placenta. As there was a part of placenta adherent to the left fundolateral region with an area of omental adhesions corresponding to the adherent placenta on the serosal surface indicating a possibility of uterine musculature trauma or perforation during previous curettage. A detailed history and documentation of previous procedure with any aforesaid complication would have aided in the prompt antenatal diagnosis of the condition.
Keeping in mind a probable diagnosis of MAP helps in saving maternal lives. This not only helps in counseling but also monitoring of high risk patients for MAP on the basis of history and USG. Efforts should be made to reduce primary cesarean sections so that morbidity and mortality related to MAP can be reduced. If cesarean section rates continue to increase, the incidence of morbidly adherent placenta will also rise substantially.[11] Previous gynecological procedures like curettage also favor such an occurrence which should also be kept in mind when managing cases with such a history.[3]

The incidence of MAP is increasing due to higher cesarean section rate and other uterine procedures. Antenatal diagnosis is possible using USG and color Doppler imaging. Preoperative counseling, planning followed by well planned cesarean hysterectomy and multidisciplinary approach are necessary to reduce morbidity and mortality associated with MAP. Our case suggests that in women at risk for invasive placentation who have had not only cesarean section but also procedures like uterine evacuation or curettage, possibility of morbidly adherent placenta should be considered and appropriate management should be done for early diagnosis and treatment to avoid massive hemorrhage, unplanned emergency hysterectomies and thus associated morbidity and mortality.