Approximately 11% of women will undergo pelvic reconstructive surgery for pelvic organ prolapse and/or urinary incontinence during their lifetime. Cystocele in women is one of the common problems associated with uterovaginal prolapse. It occurs when the fascia between urinary bladder and vagina is weakened allowing the bladder to herniate into the vagina. While usually not lifethreatening, cystocele is often associated with deterioration in quality of life and may contribute to bladder and sexual dysfunction. It was conventionally repaired by plication of the pubovesicocervical fascia from the right and left sides in the midline. The next step in its evolution was site specific repair, in which the type of defect in the fascia was repair instead of plicating the fascia indiscriminately. The third step was use of biological and synthetic meshes. However the meshes have their own problems and complications. A novel approach of using the uterosacral ligaments to perform a cystocele repair after a vaginal hysterectomy is described here.

Genital prolapse in women was known to Hippocrates and Galen. Heming first operated on the anterior vaginal wall in 1831. Howard Kelly of Baltimore championed the concept of plication of pubovesicocervical fascia in the midline for repair of a cystocele.[1] In 1909, George R. White of Georgia published an account of cystocele repair using a transvaginal paravaginal approach.[1,2] A. Cullen Richardson and associates of Georgia developed the concept of classifying fascial defects as proximal, distal, central, and lateral.[2,3] This encouraged gynecologists to identify and repair each vaginal defect and to return support attachments to their original anatomic location. Emphasis was focused on he hernial nature of prolapse and led to the abandonment of absorbable suture in favor of permanent suture in repairs.[4-8] The results of site specific repair of a cystocele are far superior to those of plication of the fascia.[9-12] Postoperative complications and urinary disturbances are also much less. Subsequently the trend has been moving towards use of biological or synthetic meshes for the repair. Meshes behave differently in the subvaginal space than in the abdominal wall. Infection, erosion and extrusion rates are higher and so is the risk of litigation. We prefer a site specific repair to the use of a mesh. In case the fascia is too weak to be repaired adequately to provide a satisfactory repair, the uterosacral ligaments may be used to provide the required support to the urinary bladder. A novel approach of using the uterosacral ligaments to perform a cystocele repair after a vaginal hysterectomy is described here. 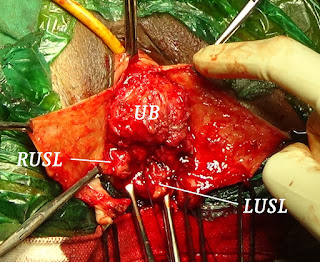 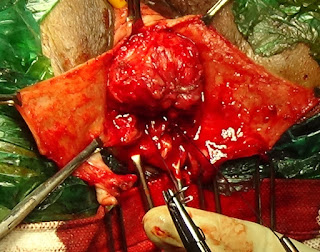 Figure 2. No. 1 polyglactin ligature on the RUSL is threaded on a curved needle. 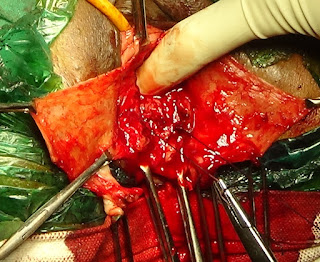 Figure 3. The cystocele is reduced by pressure of a finger. 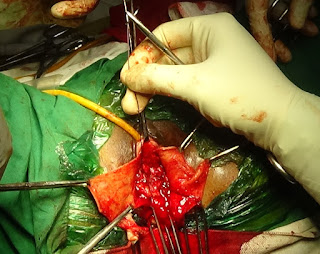 Figure 4. The RUSL ligament is drawn forward along the right side of the urethra. 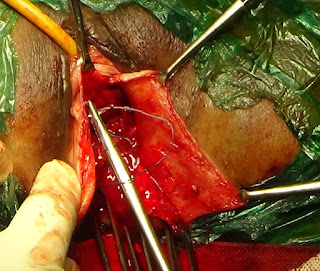 Figure 5. The needle is passed through the right flap of the vaginal mucosa, from inside out, at the level a little posterior to the external urinary meatus. 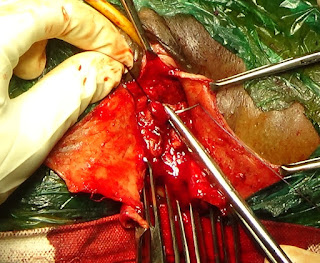 Figure 6. Another suture of No. 1 polyglactin suture is passed through the terminal part of the RUSL and tied. 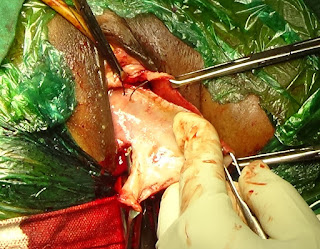 Figure 7. The suture is passed through the right flap of the vaginal mucosa, from inside out, 5 mm away from the first suture. 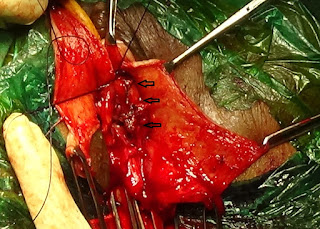 Figure 8. The LUSL ligament (arrows) is drawn forward along the left side of the urethra. 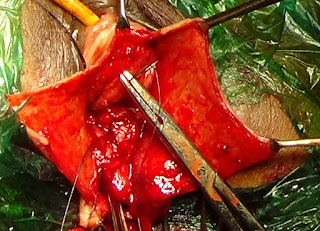 Figure 9. No. 1 polyglactin ligature on the LUSL is threaded on a curved needle. 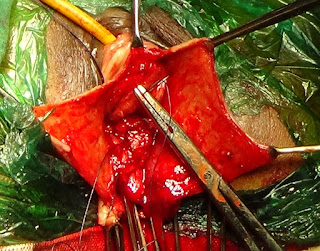 Figure 10. The needle is passed through the left flap of the vaginal mucosa, from inside out, at the same level as the first suture on the right side. 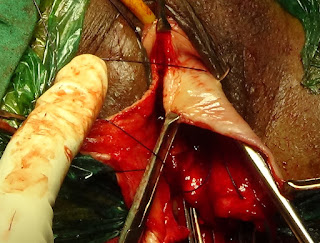 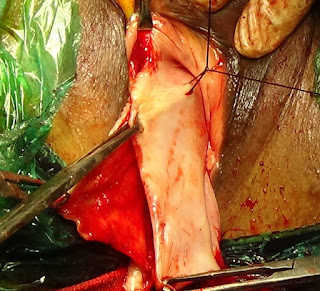 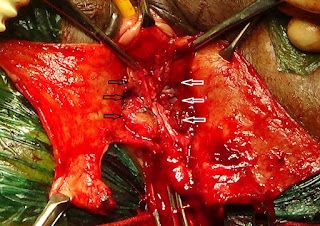 Figure 13. The RUSL (black arrows) and LUSL (white arrows) are seen to be drawn forwards under the base of the urinary bladder. 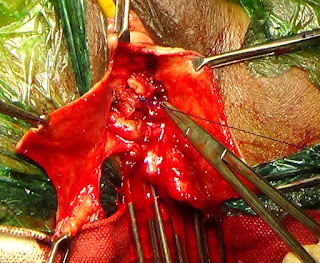 Figure 14. The two uterosacral ligaments are approximated in the midline with interrupted sutures of No. 1-0 polypropylene. 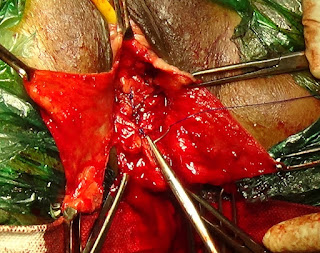 Figure 15. Approximation of the two uterosacral ligaments in the midline is complete. 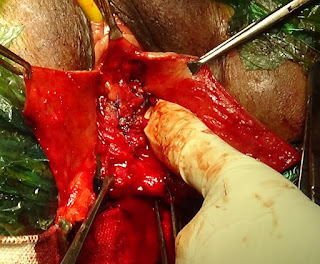 Figure 16. The gap between the LUSL and left lateral pelvic wall is demonstrated by passing a finger between the two. 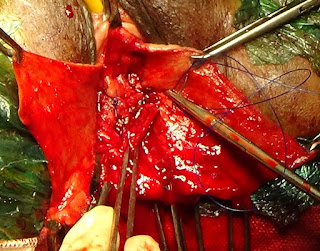 Figure 17. The left edge of the LUSL is sutured to the left white line with interrupted sutures of No. 1-0 polypropylene. 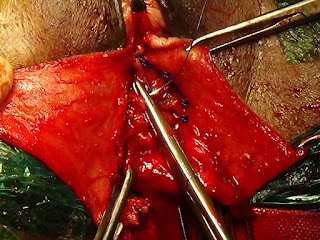 Figure 18. The right edge of the RUSL is sutured to the right white line with interrupted sutures of No. 1-0 polypropylene. 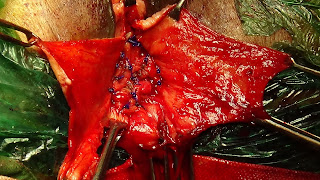 Figure 19. The end result: the two uterosacral ligaments have been sutured to each other in midline, and each one has been sutured to the white line of the respective side laterally.

Pelvic endopelvic fascia is fibroelastic connective tissue matrix with varying amounts of smooth muscle. It covers all the pelvic organs It fills the space between the pelvic diaphragm, the pelvic sidewall, and the visceral peritoneum. The endopelvic fascia covering the obturator internus is called as the obturator fascia. It is well defined in the arcus tendineus fascia pelvis (white line). It is condensed to form the pubocervical ligaments, which are attached to the under surface of the superior pubic ramus, the arcus tendineus fascia pelvis and the pericervical ring. This insertion is continuous with and forms part of the pericervical ring. The pubovesicocervical fascia is attached to the pubic tubercles, the pubic arch, the urogenital diaphragm, the white line, the pericervical ring and the cardinal ligaments. It is continuous with the fascia over the urinary bladder and the vagina. Continuity of the fascia, the uterosacral-cardinal ligament complex and vesical fascia is essential for keeping the bladder supported.[1,2] If the fascia gets detached from the white line, a lateral cystocele develops.[9] If it gets separated from the pericervical ring and the uterosacral-cardinal cardinal ligament complex, a central transverse type of cystocele develops.[9] Identification of these defects is easy clinically and during anterior colporrhaphy.
If the endopelvic fascia is too weak, a site specific repair does not often work because there is no specific defect located at any particular site, but all the fascia is weak. In such situation, if the uterosacral-cardinal ligaments are thick, they can be used to support the urinary bladder. In the new operation described here, the uterosacral ligaments are carried forward in the same direction in which they are present normally. That becomes possible because they are lengthened due to genital prolapse. Since they originate from the same endopelvic fascia, being its condensed parts, they can be used effectively for the repair of the cystocele. When they are joined to each other in the midline and fixed under the urinary bladder, they provide a strong and wide shelf for the urinary bladder to rest on. There are gaps between the sides of the ligaments and the obturator fascia, and if these are not occluded, the patient may present with uni- or bilateral cystocele. These gaps are closed by suturing the lateral edges of the uterosacral ligaments to the white lines of the respective sides. This results in reestablishment of continuity of fascia between the white lines laterally and uterosacral ligaments posteriorly. Provision of such a strong support with endogenous tissue does away with the need for synthetic meshes and possibility of complications associated with their use.