Adnexal torsion is the total or partial rotation of the adnexa around its vascular axis. Complete torsion causes venous and lymphatic blockade leading to stasis and venous congestion, hemorrhage and necrosis due to continued arterial flow without venous outflow. Clinical presentation and findings are nonspecific, hence delay in management may occur. Patient classically presents with acute abdomen and on pelvic examination a tender cystic mass separate from the uterus may be felt. The risk of adnexal torsion rises by 5-fold during pregnancy. Incidence is 5 per 10,000 pregnancies.[ 1,2]

A 30 year old Gravida 3 para 2 living 2 with 10 weeks of amenorrhea came with a new onset of severe abdominal pain, nausea and vomiting (1 episode, containing food material, non-projectile) for one day. She described the pain as sharp non-radiating type, more in the right iliac fossa with a sudden onset, and with no relieving factors. Abdominal pain was not relived with analgesics. She gave no history of vaginal bleeding or discharge. There was no history of fever, diarrhea, constipation, urinary complaints or any recent illness. No history of any risk factors for adnexal torsion such as ovarian hyperstimulation, ovarian cysts, and previous history of torsion. On general examination, she was conscious, with pulse rate of 96/ minute, temperature of 37.4 °C, blood pressure of 110/70 mm of Hg, cardiovascular and respiratory systems were normal, but pallor was present. On abdominal examination tenderness was elicited in the right illiac fossa, and a 24 week size mass was palpable in the right iliac fossa which was firm in consistency. There were no signs of peritoneal irritation. On pelvic examination there was no vaginal discharge, uterus was soft, 12 week in size, os was closed, no cervical motion tenderness could be elicited, bilateral forniceal were full and tender. In her blood investigations Hb was 7.7 gm%, WBC count was 26,300/ mm3 and platelet count was 3 lakh/ mm3. Coagulation profile was normal. Tumor marker’s were within normal limits. One unit of packed cells was transfused, parenteral antibiotics and analgesics were administered. Transabdominal sonography and Doppler visualized a single live intrauterine gestation with a gestational age of 11 weeks 1 day. Right ovary showed 13×9×11 cm with multiple peripherally arranged hemorrhagic follicles with echogenic central stroma, absent vascularity and evidence of twist anteriorly towards the left and the umbilicus, suggestive of right ovarian torsion. A bulky left ovary of size 7×4.4×8 cm with multiple simple cysts with maintained vascular stroma was seen. Mild hemoperitoneum was also seen. She and her relatives were counseled concerning the risk of abortion and the possibility of adnexal torsion, and informed consent for abdominal exploration with the possible need for salpingo-oophorectomy was obtained. An emergency exploratory laparotomy under general anesthesia through midline vertical infraumblical incision was performed, demonstrating an enlarged, 15×15 cm, hemorrhagic, irregular, ruptured, gangrenous right ovary and lateral 2/3rd of right fallopian tube, twisted twice at the infundibulo-pelvic ligament. (Figure 1s). Hemoperitoneum of around 250 cc and clots of around 50 gm were present. Left ovary was bulky and showed multiple simple cysts with maintained vascularity. Detorsion was carefully performed, but no improvement in color or decrease in edema was noted even after 20 minutes. A right salpingo-oophorectomy was then performed. Some left ovarian cysts were aspirated and some were enucleated and left ovarian reconstruction was done. Left fallopian tube was normal. 1 unit blood was transfused postoperatively. Injection depot hydroxyprogesterone caproate was given. Parenteral  antibiotics were continued. The postoperative course was uneventful, and a live intrauterine pregnancy was confirmed after 3 days, postoperatively. She was discharged on day 5 with Hb of 9.6 gm% and WBC count of 9300/ mm3.The histopathology report was suggestive of hemorrhagic infarct secondary to torsion of right ovary, right tube was markedly congested. 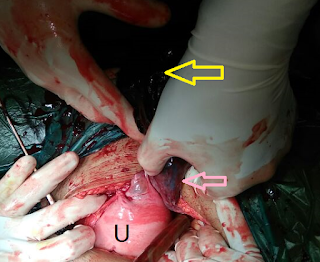 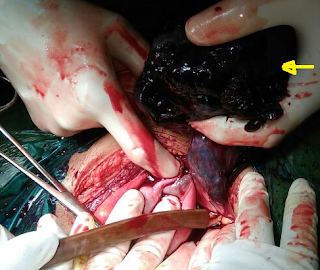 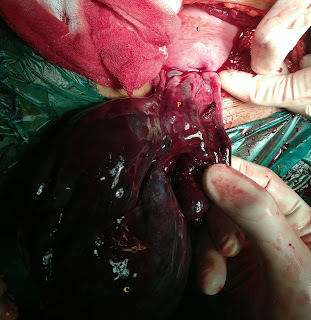 Figure 3. Pedicle (P) untwisted to check viability of the cyst (C). U is the gravid uterus

Adnexal torsion during pregnancy is a rare condition. Ovarian torsion occurs more on right side, presumably because the sigmoid colon limits the mobility of the left ovary.[3] It is mostly associated with ovarian stimulation for in vitro fertilization (IVF) or with ovarian masses, mainly of functional origin. Moderate size, free mobility and long pedicle are predisposing factors. The exact etiology is obscure. Torsion occurs mostly when the ovary is enlarged either due to cysts or neoplasms. The majority of cysts are functional. The most frequent nonfunctional neoplasms are serous or mucinous cystadenomas, benign cystic teratomas ("dermoids"), and ovarian fibromas. The incidence of ovarian torsion rises 5-fold during pregnancy to approximately 5 per 10,000 pregnancies.[1,2] Most common cause in pregnancy is a corpus luteum cyst, which usually regresses spontaneously by the second trimester. Hence, ovarian torsion in pregnancy occurs most commonly in the first trimester, occasionally in the second, and rarely in the third.[4] Differential diagnosis could be other acute abdominal conditions such as appendicitis, ureteral or renal colic, cholecystitis and bowel obstruction, non preganant horn of bicornuate uterus, appendiceal abscess and ectopic pregnancy. The presence of an ovarian mass on ultrasound may indicate an adnexal torsion. Management of adnexal torsion in pregnancy remains controversial. In the first trimester, the risk of fetal loss is the smallest with modern anesthetic techniques. In second and third trimester, surgery is associated with the risk of premature labor. During the first trimester of pregnancy, it can be approached laparoscopically.[5]  In the second or third trimester, laparotomy is the choice of approach, due to enlarged ovary and size of pregnant uterus. Since long time adnexal torsion has been treated by excision of the affected parts without untwisting, because of the fear of emboli injecting from the thrombosed ovarian veins.[6] However, by untwisting the ovarian pedicle and reestablishing ovarian circulation has recently been shown to result in viable ovarian tissue on the affected side, with no systemic complications.[5,7] Conservative treatment is warranted to preserve fertility, even for adnexa that initially appear nonviable and purple or black in color.[8,9]

Ovarian torsion in pregnancy is a rare condition. Diagnosis depends on clinical presentation and ultrasound evidence of an enlarged adnexal mass. Surgery when required, can be approached either laparoscopically or by laparotomy.