Bartter Syndrome – a Rare Cause Of Maternal Polyhydramnios

Polyhydramnios is pathological increase in the amount of amniotic fluid. There are various maternal and fetal causes of polyhydramnios. Bartter syndrome is a renal salt wasting disorder causing fetal polyuria that can result in polyhydramnios.

A 28 year old woman married since 8 years G2P1L1A0  with  spontaneous conception and a non consanguineous marriage, registered with a private practitioner and was on regular follow up. Her previous pregnancy was uneventful. She delivered vaginally a healthy male child 6 years back. Her hemoglobin was 12.3 gm% , serology for HIV,  HbsAg  and  VDRL were negative . Fasting blood sugar was 79 mg% and blood group was O positive. First trimester ultrasound (USG) at 9 weeks of gestation and quadruple marker test at 16 weeks were normal. However, ultrasonography at 20 weeks showed elevated liquor with amniotic fluid index ( AFI) of 21 cm. There were no structural anomalies. USG scan done two weeks after this showed a rise in liquor volume with an AFI of 31 cm. Hence, she was referred to a higher center for further management.
In our hospital, she presented at 25 weeks of gestation. Examination showed over distended abdomen with full flanks, and uterus of 30 weeks size and presence of polyhydramnios. Fetal heart rates were regular and there was no appreciable uterine activity. Cervical internal os was closed . Abdominal girth was 114 cm and fundal height was 50 cm. Since she was asymptomatic and respiratory rate was within normal limits, she was considered for outpatient management and was advised serum TSH, OGTT and to follow up with reports, or whenever she becomes symptomatic. However, she presented to the emergency department 2 weeks later with complaints  of  abdominal pain. There was no leaking or bleeding per vaginum. Examination parameters were within normal limits and fundal height was 52 cm and abdominal girth was 116 cm. Uterus was relaxed. On per speculum examination there was no leak. On per vaginal  examination os was closed and uneffaced. OGTT with 75gm of glucose showed values of 78 mg%, 142 mg%, 124 mg% and 103 mg% as fasting, end of first hour, second hour and third hour respectively. Serum TSH was 2.6 uIU /ml and HbA1C was 4.5%.  Fetal echocardiogram was normal.  In view of no obvious detectable cause, she was managed as a case of idiopathic polyhydramnios. Tablet indomethacin was started with an initial dose of 50 mg followed by 25 mg four times. Her pain subsided. Ultrasound done showed  AFI of 70 cm .
Serial fetal 2 D echo was done weekly to monitor ductus arteriosus. Indomethacin was to be continued till there were signs of narrowing of ductus arteriosus. Fortunately there was no narrowing of ductus arteriosus.  Injection  Dexamethasone  6 mg 12 hourly,  total 4 doses were  given, hematinics and calcium were continued.  Blood sugar was repeated which was also normal. Daily fundal height and abdominal girth was monitored which was almost constant at 52 cm and 115 cm respectively. During her stay in hospital she never developed respiratory distress, hence therapeutic amniocentesis was not considered for this patient. At 33 weeks and 6 days, due to technical reasons fetal 2D echo could not be done further and hence decision to stop oral indomethacin was taken.  Just one day later at 34 weeks of gestation she developed preterm premature rupture of membranes. Urgent ultrasound showed breech presentation, hence she underwent an emergency cesarean section. Intraoperatively almost 7 liters of amniotic fluid was  drained Four suction bottles of 2 liter capacity each almost filled up (figure 1).  A female neonate of 1.9 kg was delivered with APGAR score of  9/10. Neonate was shifted to NICU in view of low birth weight.  There was no abruption or postpartum hemorrhage.
In its course in NICU as neonate was losing her weight and had salt wasting polyuria an electrolyte report was sent on day one of life. Serum sodium and potassium were 126 meq/l 2.3 meq/l respectively. A sample sent few hours later for reconfirmation showed values of serum sodium, potassium and chloride as 122 meq/l,  2.8 meq/l and 95 meq/l respectively. Her serum sodium level were in range of 118 mEQ/l. Sodium correction was done. On clinical basis and investigations baby was diagnosed to have Bartter’s syndrome. Neonate received electrolyte and fluid correction. She was started on indomethacin at the dose of 1mg/kg. Neonate was discharged on indomethacin, syrup potassium chloride and follow up. Follow up would be for weight gain and electrolyte balance. Genetic testing for confirmation was offered, however due to financial constraints it was not carried out. 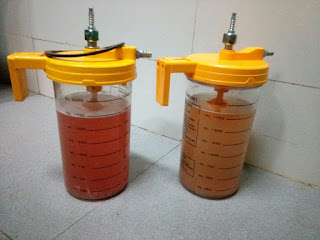 Polyhydramnios, a condition characterized by excess of amniotic fluid is associated with significant fetal morbidity and mortality.[1,2]  It requires a thorough antenatal workup and meticulous monitoring.  Even the rare causes need to be anticipated. BS is an autosomal recessive disorder where the chloride transport is defective across the thick ascending loop of Henle and or distal convoluted tube.[3,4]  It results in loss of Na+, K+, Cl- and Ca++ ions and excess water loss. Clinical features include fetal polyuria causing polyhydramnios, preterm delivery, postnatal polyuria, failure to thrive. Biochemical parameters show hypokalemia, metabolic alkalosis and hyperaldosteronism.[3,4]
Antenataly this condition can be diagnosed by biochemical analysis of amniotic fluid which shows high chloride levels.[5]  Postnatally electrolyte and fluid correction are the mainstay of  treatment. Recommended treatment is Indomethacin in the dose of 1-5 mg/kg/day.[6,7,8]  It inhibits prostaglandin synthatase, decreases renal salt loss and hence reduce urine output. If diagnosis is made antenatally then indomethacin is the drug of choice. By decreasing fetal urine output it controls polyhydramnios. However it can cause closure of ductus arteriosus, hence its use mandates frequent monitoring of fetal ductus arteriosus for signs of narrowing. In our case we had started indometthacin to control polyhydramnios. Just one day after indomethacin was stopped  patient had preterm premature rupture of membranes, thus proving the tocolytic effect of indomethacin .
Long term complications involve nephrocalinosis, growth failure, renal insufficiency. Parents need to be educated  regarding treatment and need of follow up for best outcome. Being autosomal recessive there is 25% risk of recurring in the subsequent pregnancy and prenatal diagnostic tests should be offered to the parents.

Unexplained  polyhydramnios is a real challenge for the treating obstetrician. A high index of suspicion  of  this entity is warranted  in case of  increasing polyhydramnios  without apparent fetal abnormalities or maternal  factors. Antenatal diagnosis of this syndrome is possible by subjecting the amniotic fluid to biochemical analysis. Its treatment with indomethacin and therapeutic amniocentesis if required can prolong pregnancy and improve the fetal outcome. It is recommended that parents should be offered prenatal diagnosis in subsequent pregnancies.