Laparoscopic Excision Of A Huge Ovarian Cyst In A Teenager

Ovarian cysts were conventionally managed by laparotomy or minilaparotomy incisions. Laparoscopic management of ovarian cysts is gaining importance due to the various benefits and minimal invasive approach, especially in younger patients. Here we present a case of an 18 year old girl with a 20×20×15 cm size ovarian cyst treated laparoscopically.

Ovarian cysts are common and symptomatic if large in size and pose a risk of rupture or torsion. Although studies have compared small to medium size cysts managed by laparotomy, minilaparotomy or laparoscopy, there aren’t many similar cases reported for large cysts.[1] Managing large ovarian cysts, extending supraumbilically, poses a challenge in terms of trocar entry and specimen retrieval. Below case presented is such of a 32 weeks size simple ovarian cyst operated by endoscopy.

An 18 year old unmarried nulligravid female presented with dull aching pain and lump in abdomen progressing over two years. She had attained menarche at 14 years age and had regular cycles. There were no bowel or bladder disturbances, no acute excruciating pain or vomiting, no fever, loss of appetite or loss of weight or family history of ovarian or breast cancer. Per abdomen a 36 weeks size mass was palpated which was cystic, non-tender and had side to side mobility. Trans abdominal ultrasound reveled a 20×20×15 cm size simple ovarian cyst. CA-125 levels were 14 IU/ml. Provisional diagnosis was of a benign ovarian cyst. 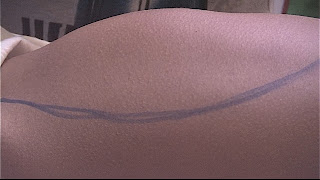 She was taken for surgery under general anesthesia. A supraumbilical 10 mm trocar was inserted by direct entry technique and two 6 mm accessory ports were taken under vision on the left lower and upper abdomen respectively. Intraoperative findings showed a large left ovarian cyst with a smooth regular outer surface reaching up to the under surface of the liver with the left fallopian tube stretched over its surface. There was no ascites or adhesions. The uterus and the right adnexa appeared normal. 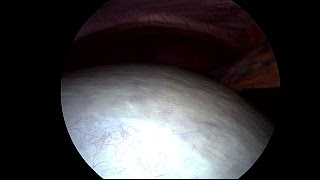 Figure 2. Cyst reaching up to the liver.

Cyst was punctured and 6.5 liters clear fluid was aspirated under vision while preventing spillage. No septae or solid areas were encountered. Thin cyst wall remained without any identifiable ovarian tissue at the hilum. A unilateral salpingo-ovariectomy was done by lifting up the cyst wall and coagulating its base and ovarian and infundibulopelvic ligaments using bipolar cautery and cutting with harmonic scalpel. Specimen was retrieved through the left lower port after enlarging it to 1.5 cm. Peritoneal irrigation was done with 2 liters normal saline and hemostasis was confirmed. The procedure lasted 70 minutes. Postoperative condition of the was good and she was discharged on day 2. Histopathology reported benign serous cystadenoma. 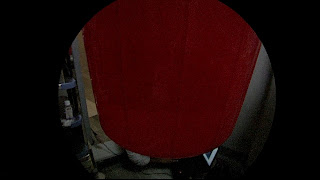 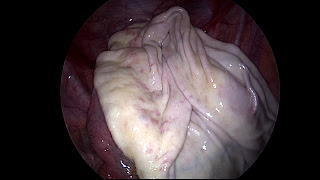 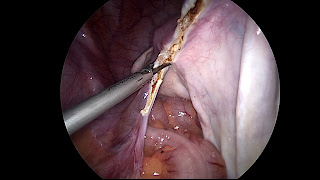 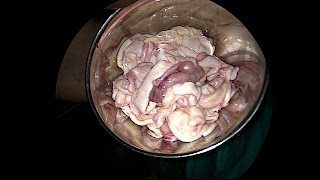 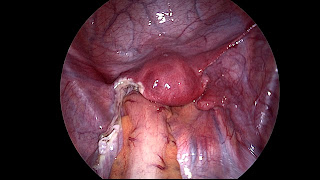 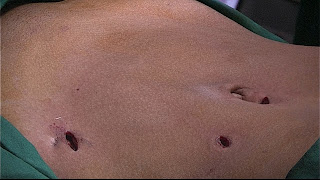 Ovarian cysts are common pelvic masses in patients of fertile age (27.5% incidence), most are benign, serous cystadenoma being the most common variety (40.2%).[2)] Large ovarian tumors (> 10 cm) are more common in the extremes of the reproductive age.[3]
A rapid increase in size, a poor general condition of patient or a positive family history prompts towards malignancy. Cases should be evaluated further by an abdominopelvic imaging and serum tumor markers before planning the surgery.[3]
The earliest study by Salem et al in 2002 mentioned 15 large ovarian cysts managed laparoscopically through the Palmer point entry, cyst puncture and conventional specimen retrieval.[4] Study by Eltabbakh et al in 2008 of 33 large benign cysts resulted in two cases being converted to laparotomy. Unilateral salpingo-ovariectomy was done in 16 cases and bilateral in 4, cystectomy in 2 and hysterectomy with bilateral adnexectomy in 9 cases. Cysts were removed vaginally after aspiration through vagina in 11 cases, by a lower quadrant incision in 5 and through the umbilical incision in 15 cases.[5]
A similar case described by Rabbani et al used Veress intraumbilical needle to first aspirate the cyst followed by reinsertion and insufflation.[6] Whereas 5 cases reported in 2013 used open method for trocar entry and aspiration under vision followed by oophorectomy.[7]
Two technical difficulties for the endoscopist are inadvertent rupture and specimen retrieval. Entry can be facilitated by direct trocar entry or Veress insufflation. This can be intraumbilical, supraumbilical, via Palmer’s point or Lee Huang point or an open blunt trocar entry by Hasson’s technique. A Cochrane review update of 2015 found no advantage of either technique over the other.[8]
In multivariate analysis of epithelial ovarian cancer intraoperative spillage demonstrated no adverse effect on prognosis. Nevertheless, spillage should be avoided and thorough wash should be given.[9] Endobag extraction is the best method accepted unanimously although these are retrospective studies.[10] In a large study conducted by Lim S et al in 2012 for large malignant ovarian cysts treated laparoscopically in 81 patients, it was found that tumor size was not a limiting factor even in malignancies.[11]
A review of 20 articles encompassing 852 cases by Eltabbakh in 2016 estimated complication rates as 1.9 %. Laparoscopic conversion was in 3.9 %  cases. Borderline ovarian tumors and ovarian cancers were  2.5 %  and 3.1 % respectively.[12]
The most important aspect of surgical management by laparoscopy is patient selection. With considerable care and expertise laparoscopy can be defined as a gold standard for large ovarian masses.